Pete Clemons with his article from the  Coventry Telegraph on the Lanchester Arts Festival 1972. The Lanch Polytech, now known as Coventry University.

Parts of the festival were held at the Locarno in Coventry and this article concerns the recording of  Chuck Berry's biggest selling record My Ding a Ling, recorded in Coventry at the concert.

Readable text below the graphics.. 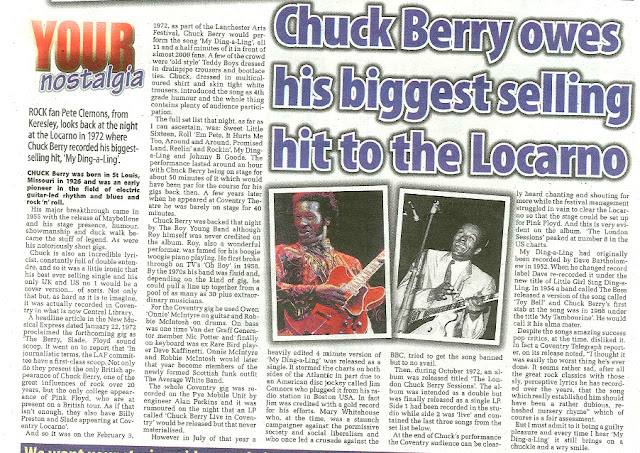 CHUCK Berry was born in St Louis, Missouri in 1926 and was an early pioneer in the field of electric guitar-led rhythm and blues and rock 'n' roll.

His major breakthrough came in 1955 with the release of Maybellene and his stage presence, humour, showmanship and duck walk became the stuff of legend. As were his notoriously short gigs.

Chuck is also an incredible lyricist, constantly full of double entendre, and so it was a little ironic that his best ever selling single and his only UK and US no 1 would be a cover version... of sorts. Not only that but, as hard as it is to imagine, it was actually recorded in Coventry in what is now Central Library. A headline article in the New Musical Express dated January 22, 1972 proclaimed the forthcoming gig as 'The Berry, Slade, Floyd sound scoop. It went on to report that 'In journalistic terms, the LAF committee have a first-class scoop. Not only do they present the only British appearance of Chuck Berry, one of the great influences of rock over 20 years, but the only college appearance of Pink Floyd, who are at present on a British tour. As if that isn't enough, they also have Billy Preston and Slade appearing at Coventry Locarno'.

And so it was on the February 3, 1972, as part of the Lanchester Arts Festival, Chuck Berry would perform the song 'My Ding-a-Ling', all 11 and a half minutes of it in front of almost 2000 fans. A few of the crowd were 'old style' Teddy Boys dressed in drainpipe trousers and bootlace ties. Chuck, dressed in multicoloured shirt and skin tight white trousers, introduced the song as 4th grade humour and the whole thing contains plenty of audience participation.

The full set list that night, as far as I can ascertain, was: Sweet Little Sixteen, Roll 'Em Pete, It Hurts Me Too, Around and Around, Promised Land, Reelin' and Rockin', My Dinga-Ling and Johnny B Goode. The performance lasted around an hour with Chuck Berry being on stage for about 50 minutes of it which would have been par for the course for his gigs back then. A few years later when he appeared at Coventry Theatre he was barely on stage for 40 minutes.

Chuck Berry was backed that night by The Roy Young Band although Roy himself was never credited on the album. Roy, also a wonderful performer, was famed for his boogie woogie piano playing. He first broke through on TV's 'Oh Boy' in 1958. By the 1970s his band was fluid and, depending on the kind of gig, he could pull a line up together from a pool of as many as 30 plus extraordinary musicians.

The whole Coventry gig was recorded on the Pye Mobile Unit by engineer Alan Perkins and it was rumoured on the night that an LP called 'Chuck Berry Live in Coventry' would be released but that never materialised.

However in July of that year a heavily edited 4 minute version of 'My Ding-a-Ling' was released as a single. It stormed the charts on both sides of the Atlantic in part due to an American disc jockey called Jim Connors who plugged it from his radio station in Boston USA. In fact Jim was credited with a gold record for his efforts. Mary Whitehouse who, at the time, was a staunch campaigner against the permissive society and social liberalism and who once led a crusade against the BBC, tried to get the song banned but to no avail.

Then, during October 1972, an album was released titled 'The London Chuck Berry Sessions'. The album was intended as a double but was finally released as a single LP.

Side 1 had been recorded in the studio while side 2 was 'live' and contained the last three songs from the set list below.

At the end of Chuck's performance the Coventry audience can be clearly heard chanting and shouting for more while the festival management struggled in vain to clear the Locarno so that the stage could be set up for Pink Floyd. And this is very evident on the album. 'The London Sessions' peaked at number 8 in the US charts.

My Ding-a-Ling had originally been recorded by Dave Bartholomew in 1952. When he changed record label Dave re-recorded it under the new title of Little Girl Sing Ding-a-Ling. In 1954 a band called The Bees released a version of the song called 'Toy Bell' and Chuck Berry's first stab at the song was in 1968 under the title 'My Tambourine'. He would call it his alma mater.

Despite the songs amazing success pop critics, at the time, disliked it. In fact a Coventry Telegraph reporter, on its release noted, "I thought it was easily the worst thing he's ever done. It seems rather sad, after all the great rock classics with those sly, perceptive lyrics he has recorded over the years, that the song which really established him should have been a rather dubious, rehashed nursery rhyme" which of course is a fair assessment.

But I must admit to it being a guilty pleasure and every time I hear 'My Ding-a-Ling' it still brings on a chuckle and a wry smile.


Although the recording of the single was from the Coventry gig, this footage is from the later London Concert.