Pink Floyd at the Coventry Locarno 1972

Pete Clemons on the Lanchester Arts festival gigs at the Coventry Locarno 1972.

For the Coventry Telegraph.
(Readable Text below the graphics.) 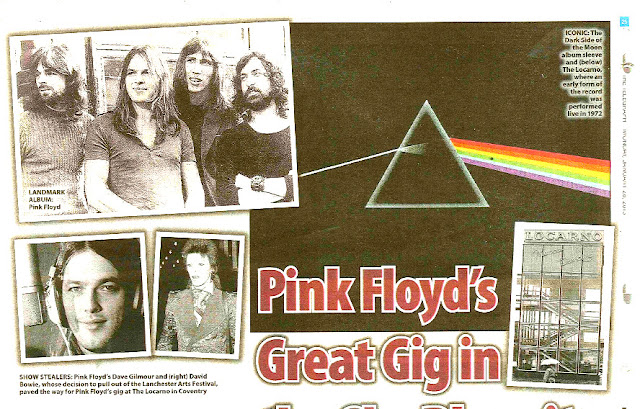 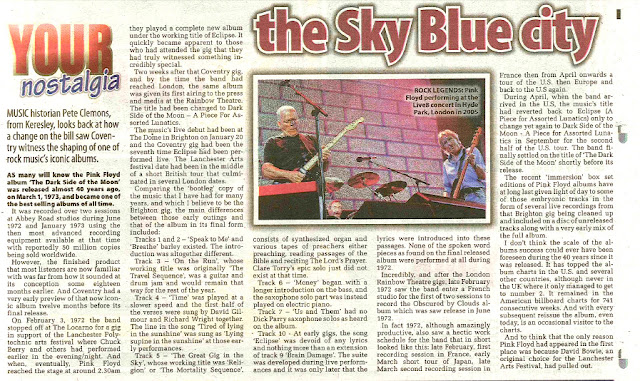 Pete Clemons - for the Coventry Telegraph


MUSIC historian Pete Clemons, from Keresley, looks back at how a change on the bill saw Coventry witness the shaping of one of rock music's iconic albums.

AS many will know the Pink Floyd album 'The Dark Side of the Moon' was released almost 40 years ago, on March 1, 1973, and became one of the best selling albums of all time.

It was recorded over two sessions at Abbey Road studios during June 1972 and January 1973 using the then most advanced recording equipment available at that time with reportedly 50 million copies being sold worldwide.

However, the finished product that most listeners are now familiar with was far from how it sounded at its conception some eighteen months earlier. And Coventry had a very early preview of that now iconic album twelve months before its final release.

On February 3, 1972 the band stopped off at The Locarno for a gig in support of the Lanchester Polytechnic arts festival where Chuck Berry and others had performed earlier in the evening/night. And when, eventually, Pink Floyd reached the stage at around 2.30am they played a complete new album under the working title of Eclipse. It quickly became apparent to those who had attended the gig that they had truly witnessed something incredibly special.

Two weeks after that Coventry gig, and by the time the band had reached London, the same album was given its first airing to the press and media at the Rainbow Theatre. The title had been changed to Dark Side of the Moon - A Piece For Assorted Lunatics.

The music's live debut had been at The Dome in Brighton on January 20 and the Coventry gig had been the seventh time Eclipse had been performed live. The Lanchester Arts festival date had been in the middle of a short British tour that culminated in several London dates. Comparing the 'bootleg' copy of the music that I have had for many years, and which I believe to be the Brighton gig, the main differences between those early outings and that of the album in its final form included:

Tracks 1 and 2 - 'Speak to Me' and 'Breathe' barley existed. The introduction was altogether different.

Track 3 - 'On the Run', whose working title was originally 'The Travel Sequence', was a guitar and drum jam and would remain that way for the rest of the year.

Track 4 - 'Time' was played at a slower speed and the first half of the verses were sung by David Gilmour and Richard Wright together. The line in the song 'Tired of lying in the sunshine' was sung as 'Lying supine in the sunshine' at those early performances.

Track 5 - 'The Great Gig in the Sky', whose working title was 'Religion' or 'The Mortality Sequence', consists of synthesized organ and various tapes of preachers either preaching, reading passages of the Bible and reciting The Lord's Prayer. Clare Torry's epic solo just did not exist at that time.

Track 6 - 'Money' began with a longer introduction on the bass, and the saxophone solo part was instead played on electric piano.

Track 7 - 'Us and Them' had no Dick Parry saxophone solos as heard on the album.

Track 10 - At early gigs, the song 'Eclipse' was devoid of any lyrics and nothing more than an extension of track 9 'Brain Damage'. The suite was developed during live performances and it was only later that the lyrics were introduced into these passages. None of the spoken word pieces as found on the final released album were performed at all during 1972.

Incredibly, and after the London Rainbow Theatre gigs, late February 1972 saw the band enter a French studio for the first of two sessions to record the Obscured by Clouds album which was saw release in June 1972.

During April, when the band arrived in the U.S, the music's title had reverted back to Eclipse (A Piece for Assorted Lunatics) only to change yet again to Dark Side of the Moon - A Piece for Assorted Lunatics in September for the second half of the U.S. tour. The band finally settled on the title of 'The Dark Side of the Moon' shortly before its release.

The recent 'immersion' box set editions of Pink Floyd albums have at long last given light of day to some of those embryonic tracks in the form of several live recordings from that Brighton gig being cleaned up and included on a disc of unreleased tracks along with a very early mix of the full album.

I don't think the scale of the albums success could ever have been foreseen during the 40 years since it was released. It has topped the album charts in the U.S. and several other countries, although never in the UK where it only managed to get to number 2. It remained in the American billboard charts for 741 consecutive weeks. And with every subsequent reissue the album, even today, is an occasional visitor to the charts.

And to think that the only reason Pink Floyd had appeared in the first place was because David Bowie, an original choice for the Lanchester Arts Festival, had pulled out.