Rocking at the Ritz - Coventry Venue

Back in the early 60's the Ritz (in Longford Coventry) was the place rock it out. Pete Clemons takes you back there via his Coventry Telegraph article... 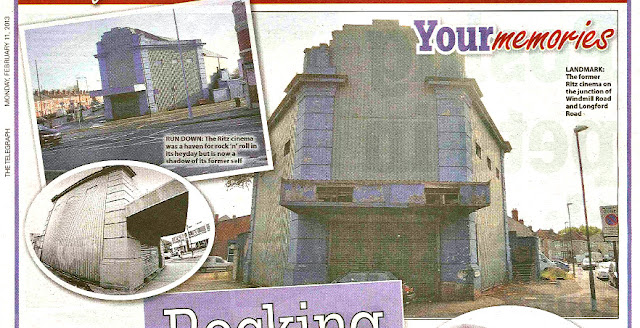 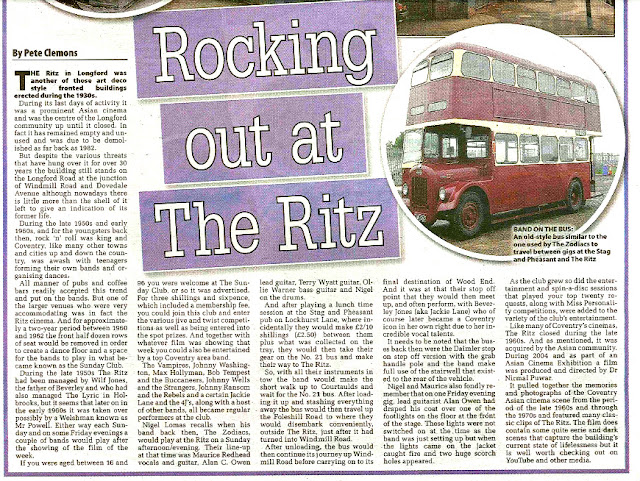 Rocking Out At The Ritz.
Pete Clemons

THE Ritz in Longford was another of those art deco style fronted buildings erected during the 1930s.

During its last days of activity it was a prominent Asian cinema and was the centre of the Longford community up until it closed. In fact it has remained empty and unused and was due to be demolished as far back as 1982.

But despite the various threats that have hung over it for over 30 years the building still stands on the Longford Road at the junction of Windmill Road and Dovedale Avenue although nowadays there is little more than the shell of it left to give an indication of its former life.

During the late 1950s and early 1960s, and for the youngsters back then, rock 'n' roll was king and Coventry, like many other towns and cities up and down the country, was awash with teenagers forming their own bands and organising dances.

All manner of pubs and coffee bars readily accepted this trend and put on the bands. But one of the larger venues who were very accommodating was in fact the Ritz cinema. And for approximately a two-year period between 1960 and 1962 the front half dozen rows of seat would be removed in order to create a dance floor and a space for the bands to play in what became known as the Sunday Club. During the late 1950s The Ritz had been managed by Wilf Jones, the father of Beverley and who had also managed The Lyric in Holbrooks, but it seems that later on in the early 1960s it was taken over possibly by a Welshman known as Mr Powell. Either way each Sunday and on some Friday evenings a couple of bands would play after the showing of the film of the week.

If you were aged between 16 and 96 you were welcome at The Sunday Club, or so it was advertised. For three shillings and sixpence, which included a membership fee, you could join this club and enter the various jive and twist competitions as well as being entered into the spot prizes. And together with whatever film was showing that week you could also be entertained by a top Coventry area band.

The Vampires, Johnny Washington, Max Hollyman, Bob Tempest and the Buccaneers, Johnny Wells and the Strangers, Johnny Ransom and the Rebels and a certain Jackie Lane and the 4J's, along with a host of other bands, all became regular performers at the club.

Nigel Lomas recalls when his band back then, The Zodiacs, would play at the Ritz on a Sunday afternoon/evening. Their line-up at that time was Maurice Redhead vocals and guitar, Alan C. Owen lead guitar, Terry Wyatt guitar, Ollie Warner bass guitar and Nigel on the drums.

And after playing a lunch time session at the Stag and Pheasant pub on Lockhurst Lane, where incidentally they would make PS2/10 shillings (PS2.50) between them plus what was collected on the tray, they would then take their gear on the No. 21 bus and make their way to The Ritz.

So, with all their instruments in tow the band would make the short walk up to Courtaulds and wait for the No. 21 bus. After loading it up and stashing everything away the bus would then travel up the Foleshill Road to where they would disembark conveniently, outside The Ritz, just after it had turned into Windmill Road.

After unloading, the bus would then continue its journey up Windmill Road before carrying on to its final destination of Wood End. And it was at that their stop off point that they would then meet up, and often perform, with Beverley Jones (aka Jackie Lane) who of course later became a Coventry icon in her own right due to her incredible vocal talents.

It needs to be noted that the buses back then were the Daimler step on step off version with the grab handle pole and the band make full use of the stairwell that existed to the rear of the vehicle. Nigel and Maurice also fondly remember that on one Friday evening gig, lead guitarist Alan Owen had draped his coat over one of the footlights on the floor at the front of the stage. These lights were not switched on at the time as the band was just setting up but when the lights came on the jacket caught fire and two huge scorch holes appeared.

As the club grew so did the entertainment and spin-a-disc sessions that played your top twenty requests, along with Miss Personality competitions, were added to the variety of the club's entertainment.

Like many of Coventry's cinemas, The Ritz closed during the late 1960s. And as mentioned, it was acquired by the Asian community. During 2004 and as part of an Asian Cinema Exhibition a film was produced and directed by Dr Nirmal Puwar.

It pulled together the memories and photographs of the Coventry Asian cinema scene from the period of the late 1960s and through the 1970s and featured many classic clips of The Ritz. The film does contain some quite eerie and dark scenes that capture the building's current state of lifelessness but it is well worth checking out on YouTube and other media.

Posted by Coventry Music Scene Archive at 11:28 AM