Don Fardon - From the Sorrows to Indian Reservation

Pete Clemon's takes up the story of  Don Fardon from the early days to the Sorrows and beyond. From his recent Coventry Telegraph article... 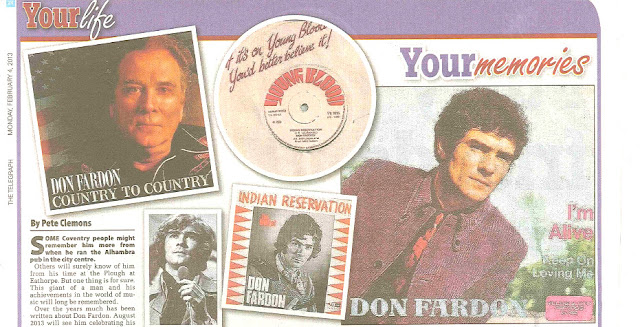 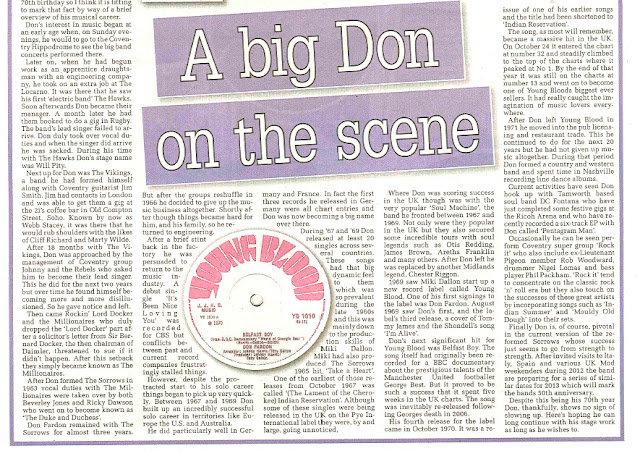 A big Don on the scene; Your memories:

SOME Coventry people might remember him more from when he ran the Alhambra pub in the city centre.

Others will surely know of him from his time at the Plough at Eathorpe. But one thing is for sure. This giant of a man and his achievements in the world of music will long be remembered. Over the years much has been written about Don Fardon. August 2013 will see him celebrating his 70th birthday so I think it is fitting to mark that fact by way of a brief overview of his musical career.

Don's interest in music began at an early age when, on Sunday evenings, he would to go to the Coventry Hippodrome to see the big band concerts performed there.

Later on, when he had begun work as an apprentice draughtsman with an engineering company, he took on an extra job at The Locarno. It was there that he saw his first 'electric band' The Hawks. Soon afterwards Don became their manager. A month later he had them booked to do a gig in Rugby. The band's lead singer failed to arrive.

Don duly took over vocal duties and when the singer did arrive he was sacked. During his time with The Hawks Don's stage name was Will Pity.

Next up for Don was The Vikings, a band he had formed himself along with Coventry guitarist Jim Smith. Jim had contacts in London and was able to get them a gig at the 2i's coffee bar in Old Compton Street, Soho. Known by now as Webb Stacey, it was there that he would rub shoulders with the likes of Cliff Richard and Marty Wilde.

After 18 months with The Vikings, Don was approached by the management of Coventry group Johnny and the Rebels who asked him to become their lead singer. This he did for the next two years but over time he found himself becoming more and more disillusioned. So he gave notice and left. Then came Rockin' Lord Docker and the Millionaires who duly dropped the 'Lord Docker' part after a solicitor's letter from Sir Bernard Docker, the then chairman of Daimler, threatened to sue if it didn't happen. After this setback they simply became known as The Millionaires.

After Don formed The Sorrows in 1963 vocal duties with The Millionaires were taken over by both Beverley Jones and Ricky Dawson who went on to become known as 'The Duke and Duchess'.

Don Fardon remained with The Sorrows for almost three years.

But after the groups reshuffle in 1966 he decided to give up the music business altogether. Shortly after though things became hard for him, and his family, so he returned to engineering. After a brief stint back in the factory he was persuaded to return to the music industry.

A debut single 'It's Been Nice Loving You' was recorded for CBS but conflicts between past and current record companies frustratingly stalled things. However, despite the protracted start to his solo career things began to pick up very quickly.

Between 1967 and 1969 Don built up an incredibly successful solo career in territories like Europe the U.S. and Australia. He did particularly well in Germany and France. In fact the first three records he released in Germany were all chart entries and Don was now becoming a big name over there.

During '67 and '69 Don released at least 20 singles across several countries. These songs had that big dynamic feel to them which was so prevalent during the late 1960s and this was mainly down to the production skills of Miki Dallon. Miki had also produced The Sorrows 1965 hit 'Take a Heart'. One of the earliest of those releases from October 1967 was called '(The Lament of the Cherokee) Indian Reservation'. Although some of these singles were being released in the UK on the Pye International label they were, by and large, going unnoticed, Where Don was scoring success in the UK though was with the very popular 'Soul Machine', the band he fronted between 1967 and 1969. Not only were they popular in the UK but they also secured some incredible tours with soul legends such as Otis Redding, James Brown, Aretha Franklin and many others. After Don left he was replaced by another Midlands legend, Chester Riggon.

1969 saw Miki Dallon start up a new record label called Young Blood. One of his first signings to the label was Don Fardon. August 1969 saw Don's first, and the label's third release, a cover of Tommy James and the Shondell's song 'I'm Alive'.
Don's next significant hit for Young Blood was Belfast Boy. The song itself had originally been recorded for a BBC documentary about the prestigious talents of the Manchester United footballer George Best. But it proved to be such a success that it spent five weeks in the UK charts. The song was inevitably re-released following Georges death in 2006.

His fourth release for the label came in October 1970. It was a reissue of one of his earlier songs and the title had been shortened to 'Indian Reservation'.

The song, as most will remember, became a massive hit in the UK. On October 24 it entered the chart at number 32 and steadily climbed to the top of the charts where it peaked at No 1. By the end of that year it was still on the charts at number 13 and went on to become one of Young Bloods biggest ever sellers. It had really caught the imagination of music lovers everywhere.

After Don left Young Blood in 1971 he moved into the pub licensing and restaurant trade. This he continued to do for the next 20 years but he had not given up music altogether. During that period Don formed a country and western band and spent time in Nashville recording line dance albums.

Current activities have seen Don hook up with Tamworth based soul band DC Fontana who have just completed some festive gigs at the Ricoh Arena and who have recently recorded a six-track EP with Don called 'Pentagram Man'.

Occasionally he can be seen perform Coventry super group 'Rock it' who also include ex-Lieutenant Pigeon member Rob Woodward, drummer Nigel Lomas and bass player Phil Packham. 'Rock it' tend to concentrate on the classic rock 'n' roll era but they also touch on the successes of these great artists by incorporating songs such as 'Indian Summer' and 'Mouldy Old Dough' into their sets.

Finally Don is, of course, pivotal in the current version of the reformed Sorrows whose success just seems to go from strength to strength. After invited visits to Italy, Spain and various UK Mod weekenders during 2012 the band are preparing for a series of similar dates for 2013 which will mark the bands 50th anniversary.

Despite this being his 70th year Don, thankfully, shows no sign of slowing up. Here's hoping he can long continue with his stage work as long as he wishes to.