Martin Cure - From The Sabres, The Peeps, Cupid's Inspiration to Chevy

In this article Peter Clemons follows the musical career of Coventry musician Martin Cure from the Sabres in the 60's through The Peeps, Cupid's Inspiration to Chevy and much more in The Coventry Telegraph - 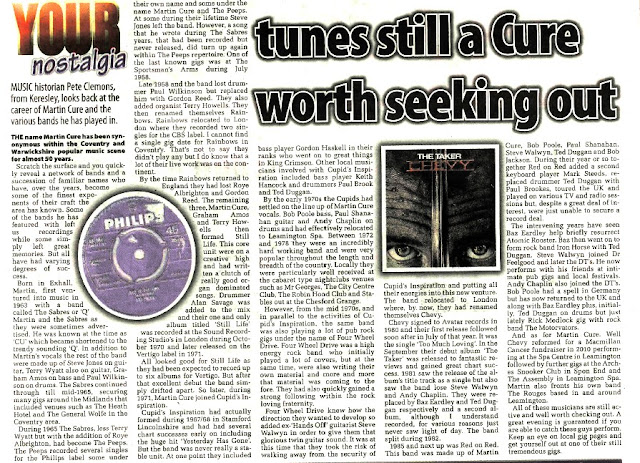 Martin's tonic of tunes still a Cure worth seeking out;  MUSIC historian Pete Clemons, from Keresley, looks back at the career of Martin Cure and the various bands he has played in.

THE name Martin Cure has been synonymous within the Coventry and Warwickshire popular music scene for almost 50 years.

Scratch the surface and you quickly reveal a network of bands and a succession of familiar names who have, over the years, become some of the finest exponents of their craft the area has known. Some of the bands he has featured with left us recordings while some simply left great memories. But all have had varying degrees of success.

Born in Exhall, Martin, first ventured into music in 1963 with a band called The Sabres or 'Q' Martin and the Sabres as they were sometimes advertised.

He was known at the time as 'CU' which became shortened to the trendy sounding 'Q'. In addition to Martin's vocals the rest of the band were made up of Steve Jones on guitar, Terry Wyatt also on guitar, Graham Amos on bass and Paul Wilkinson on drums. The Sabres continued through till mid-1965, securing many gigs around the Midlands that included venues such as The Heath Hotel and The General Wolfe in the Coventry area.

During 1965 The Sabres, less Terry Wyatt but with the addition of Roye Albrighton, had become The Peeps. The Peeps recorded several singles for the Philips label some under their own name and some under the name Martin Cure and The Peeps. At some during their lifetime Steve Jones left the band. However, a song that he wrote during The Sabres years, that had been recorded but never released, did turn up again within The Peeps repertoire. One of the last known gigs was at The Sportsman's Arms during July 1968.

Late 1968 and the band lost drummer Paul Wilkinson but replaced him with Gordon Reed. They also added organist Terry Howells. They then renamed themselves Rainbows.

Rainbows relocated to London where they recorded two singles for the CBS label. I cannot find a single gig date for Rainbows in Coventry. That's not to say they didn't play any but I do know that a lot of their live work was on the continent.

By the time Rainbows returned to England they had lost Roye Albrighton and Gordon Reed. The remaining three, Martin Cure, Graham Amos and Terry Howells then formed Still Life. This core unit were on a creative high and had written a clutch of really good organ dominated songs. Drummer Alan Savage was added to the mix and their one and only album titled 'Still Life' was recorded at the Sound Recording Studio's in London during October 1970 and later released on the Vertigo label in 1971.

All looked good for Still Life as they had been expected to record up to six albums for Vertigo. But after that excellent debut the band simply drifted apart. So later, during 1971, Martin Cure joined Cupid's Inspiration.

Cupid's Inspiration had actually formed during 1967/68 in Stamford Lincolnshire and had had several chart successes early on including the huge hit 'Yesterday Has Gone'. But the band was never really a stable unit. At one point they included bass player Gordon Haskell in their ranks who went on to great things in King Crimson. Other local musicians involved with Cupid's Inspiration included bass player Keith Hancock and drummers Paul Brook and Ted Duggan.

By the early 1970s the Cupids had settled on the line up of Martin Cure vocals, Bob Poole bass, Paul Shanahan guitar and Andy Chaplin on drums and had effectively relocated to Leamington Spa. Between 1972 and 1978 they were an incredibly hard working band and were very popular throughout the length and breadth of the country. Locally they were particularly well received at the cabaret type nightclubs venues such as Mr Georges, The City Centre Club, The Robin Hood Club and Stables out at the Chesford Grange. However, from the mid 1970s, and in parallel to the activities of Cupid's Inspiration, the same band was also playing a lot of pub rock gigs under the name of Four Wheel Drive. Four Wheel Drive was a high energy rock band who initially played a lot of covers, but at the same time, were also writing their own material and more and more that material was coming to the fore. They had also quickly gained a strong following within the rock loving fraternity.

Four Wheel Drive knew how the direction they wanted to develop so added ex-'Hands Off' guitarist Steve Walwyn in order to give them that glorious twin guitar sound. It was at this time that they took the risk of walking away from the security of Cupid's Inspiration and putting all their energies into this new venture. The band relocated to London where, by now, they had renamed themselves Chevy.

Chevy signed to Avatar records in 1980 and their first release followed soon after in July of that year. It was the single 'Too Much Loving'. In the September their debut album 'The Taker' was released to fantastic reviews and gained great chart success. 1981 saw the release of the album's title track as a single but also saw the band lose Steve Walwyn and Andy Chaplin. They were replaced by Baz Eardley and Ted Duggan respectively and a second album, although I understand recorded, for various reasons just never saw light of day. The band split during 1982.

1985 and next up was Red on Red. This band was made up of Martin Cure, Bob Poole, Paul Shanahan, Steve Walwyn, Ted Duggan and Bob Jackson. During their year or so together Red on Red added a second keyboard player Mark Steeds, replaced drummer Ted Duggan with Paul Brookes, toured the UK and played on various TV and radio sessions but, despite a great deal of interest, were just unable to secure a record deal.

The intervening years have seen Baz Eardley help briefly resurrect Atomic Rooster. Baz then went on to form rock band Iron Horse with Ted Duggan. Steve Walwyn joined Dr Feelgood and later the DT's. He now performs with his friends at intimate pub gigs and local festivals. Andy Chaplin also joined the DT's. Bob Poole had a spell in Germany but has now returned to the UK and along with Baz Eardley plus, initially, Ted Duggan on drums but just lately Rick Medlock gig with rock band The Motorvators.

And as for Martin Cure. Well Chevy reformed for a Macmillan Cancer fundraiser in 2010 performing at the Spa Centre in Leamington followed by further gigs at the Arches Snooker Club in Spon End and The Assembly in Leamington Spa. Martin also fronts his own band The Rouges based in and around Leamington.

All of these musicians are still active and well worth checking out. A great evening is guaranteed if you are able to catch these guys perform. Keep an eye on local gig pages and get yourself out at one of their still tremendous gigs.


More on Chevy and Martin Cure's bands on Hobo A to Z of Bands - here
https://sites.google.com/site/bandsfromcoventry/coventry-bands-a-to-z/coventry-bands-c/chevy


I Can Make the Rain Fall - Martin Cure and The Peeps