Peter Clemons gives us the history of the Midland's Chesford Grange venue, from Dinner dances with orchestras to to bands like The Moody Blues and John Mayall. This is his article from the Coventry Telegraph. 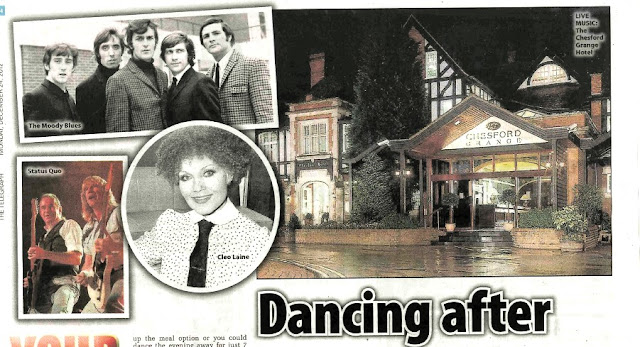 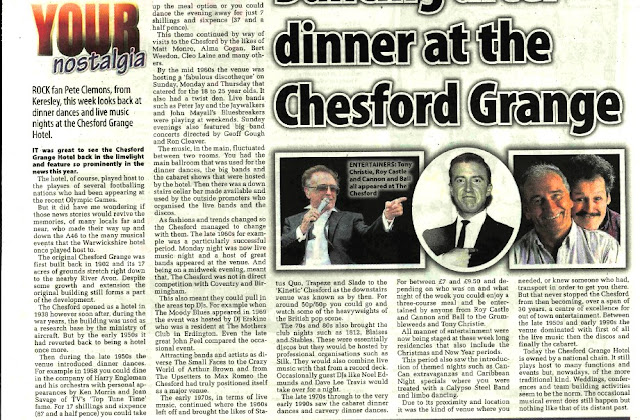 Dancing after dinner at the Chesford Grange

ROCK fan Pete Clemons, from Keresley, this week looks back at dinner dances and live music nights at the Chesford Grange Hotel.

IT was great to see the Chesford Grange Hotel back in the limelight and feature so prominently in the news this year.

The hotel, of course, played host to the players of several footballing nations who had been appearing at the recent Olympic Games.

But it did have me wondering if those news stories would revive the memories, of many locals far and near, who made their way up and down the A46 to the many musical events that the Warwickshire hotel once played host to.

The original Chesford Grange was first built back in 1902 and its 17 acres of grounds stretch right down to the nearby River Avon. Despite some growth and extension the original building still forms a part of the development.

The Chesford opened as a hotel in 1938 however soon after, during the war years, the building was used as a research base by the ministry of aircraft. But by the early 1950s it had reverted back to being a hotel once more.

Then during the late 1950s the venue introduced dinner dances. For example in 1958 you could dine in the company of Harry Engleman and his orchestra with personal appearances by Ken Morris and Joan Savage of TV's 'Top Tune Time' fame. For 17 shillings and sixpence (87 and a half pence) you could take up the meal option or you could dance the evening away for just 7 shillings and sixpence (37 and a half pence).

This theme continued by way of visits to the Chesford by the likes of Matt Monro, Alma Cogan, Bert Weedon, Cleo Laine and many others.

By the mid 1960s the venue was hosting a 'fabulous discotheque' on Sunday, Monday and Thursday that catered for the 18 to 25 year olds. It also had a twist den. Live bands such as Peter Jay and the Jaywalkers and John Mayall's Bluesbreakers were playing at weekends. Sunday evenings also featured big band concerts directed by Geoff Gough and Ron Cleaver.

The music, in the main, fluctuated between two rooms. You had the main ballroom that was used for the dinner dances, the big bands and the cabaret shows that were hosted by the hotel. Then there was a down stairs cellar bar made available and used by the outside promoters who organised the live bands and the discos.

As fashions and trends changed so the Chesford managed to change with them. The late 1960s for example was a particularly successful period. Monday night was now live music night and a host of great bands appeared at the venue. And being on a midweek evening, meant that, The Chesford was not in direct competition with Coventry and Birmingham.

This also meant they could pull in the areas top DJs. For example when The Moody Blues appeared in 1969 the event was hosted by DJ Erskine who was a resident at The Mothers Club in Erdington. Even the late great John Peel compared the occasional event.

Attracting bands and artists as diverse The Small Faces to the Crazy World of Arthur Brown and from The Upsetters to Max Romeo the Chesford had truly positioned itself as a major venue.

The early 1970s, in terms of live music, continued where the 1960s left off and brought the likes of Status Quo, Trapeze and Slade to the 'Kinetic' Chesford as the downstairs venue was known as by then. For around 50p/60p you could go and watch some of the heavyweights of the British pop scene.

The 70s and 80s also brought the club nights such as 1812, Blaises and Stables. These were essentially discos but they would be hosted by professional organisations such as Silk. They would also combine live music with that from a record deck. Occasionally guest DJs like Noel Edmunds and Dave Lee Travis would take over for a night.

For between PS7 and PS9.50 and depending on who was on and what night of the week you could enjoy a three-course meal and be entertained by anyone from Roy Castle and Cannon and Ball to the Grumbleweeds and Tony Christie. All manner of entertainment were now being staged at these week long residencies that also include the Christmas and New Year periods.

This period also saw the introduction of themed nights such as Can-Can extravaganzas and Caribbean Night specials where you were treated with a Calypso Steel Band and limbo dancing.

Due to its proximity and location it was the kind of venue where you needed, or knew someone who had, transport in order to get you there. But that never stopped the Chesford from then becoming, over a span of 30 years, a centre of excellence for out of town entertainment. Between the late 1950s and early 1990s the venue dominated with first of all the live music then the discos and finally the cabaret.

Today the Chesford Grange Hotel is owned by a national chain. It still plays host to many functions and events but, nowadays, of the more traditional kind. Weddings, conferences and team building activities seem to be the norm. The occasional musical event does still happen but nothing like that of its distant past.