Oh What a Night! - The Four Seasons Coventry Gig!

Pete Clemons hammers the keyboard with another gem for the Coventry Telegraph - This time it concerns and non-Coventry band and the story of their appearance in Coventry. 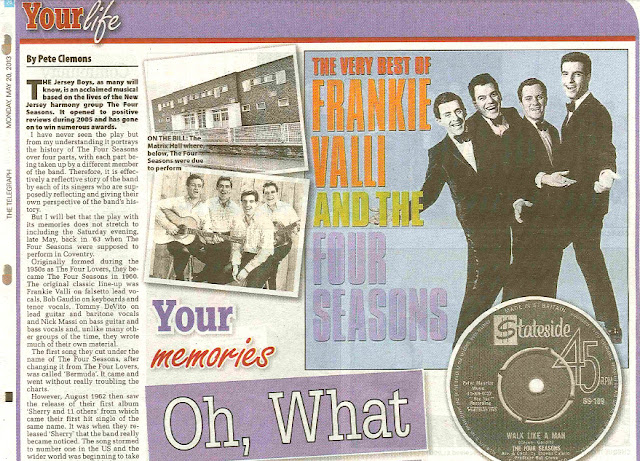 Oh, What a Night... we missed! Your memories.

THE Jersey Boys, as many will know, is an acclaimed musical based on the lives of the New Jersey harmony group The Four Seasons. It opened to positive reviews during 2005 and has gone on to win numerous awards.

I have never seen the play but from my understanding it portrays the history of The Four Seasons over four parts, with each part being taken up by a different member of the band. Therefore, it is effectively a reflective story of the band by each of its singers who are supposedly reflecting and giving their own perspective of the band's histor y.

But I will bet that the play with its memories does not stretch to including the Saturday evening, late May, back in '63 when The Four Seasons were supposed to perform in Coventry.

Originally formed during the 1950s as The Four Lovers, they became The Four Seasons in 1960. The original classic line-up was Frankie Valli on falsetto lead vocals, Bob Gaudio on keyboards and tenor vocals, Tommy DeVito on lead guitar and baritone vocals and Nick Massi on bass guitar and bass vocals and, unlike many other groups of the time, they wrote much of their own material.

The first song they cut under the name of The Four Seasons, after changing it from The Four Lovers, was called 'Bermuda'. It came and went without really troubling the charts.

However, August 1962 then saw the release of their first album 'Sherry and 11 others' from which came their first hit single of the same name. It was when they released 'Sherry' that the band really became noticed. The song stormed to number one in the US and the wider world was beginning to take notice of this incredible harmony group.


'Sherry' was followed up, during October 1962, with the band's second US number one. It was another song taken from their debut album and was called 'Big Girls Don't Cry'.

Then in January 1963 they released their third consecutive smash hit and million plus seller 'Walk Like a Man' which was the first British release on the Stateside record label and its B-side was called 'Lucky Ladybug' a song that, for some reason, the resident disc jockeys at both The Locarno and The Orchid Ballrooms received a great deal of requests to play.

1963 also saw the band make a couple of appearances on the influential US TV programme, American Bandstand and this boosted The Four Season's popularity even more. By April of that year the group set off for their first ever tour of the UK.

The Four Seasons had been a late addition to an 'All Star '63' tour which also included John Leyton, Mike Berry, Jet Harris and Tony Meehan and several others. So late in fact that their photo and band details were not included on the promotional posters or the official programme which was available to buy at the shows.

The 21-date tour, organised by Robert Stigwood, had began during April in Brighton and was making its way around the UK, stopping off at the normal big city venues. It was scheduled to finish on May 18 with a final date set for Bournemouth Winter Gardens.

Saturday May 18 was also the date that The Four Seasons were scheduled to appear in Coventry, not as part of the package all star tour, but as a special one-off gig to be held at the Matrix Hall later on in the evening after the Bournemouth show. Needless to say, things did not quite happen as they were supposed to.

The quartet was to have been backed by a group called The Innocents and the support act for the night was Shane Spencer and the Casuals.

The Innocents were formed in February 1963 and, since their formation, had almost continuously been on the road backing top artists on one night stands. They had also been on the 'All Star '63' tour as backing group for some of the other acts but not The Four Seasons.

That job had gone to a group called The Hi-Fi's.

As far as the revellers were concerned, the evening had began fine, as Shane Spencer and the Casuals performed their songs but little did they know of the turmoil going on behind the scenes. Incredibly, The Innocents arrived at the venue and performed an extended impromptu set, as I guess they had hoped to buy some time.

This was because The Four Seasons had not been so lucky and arrived late at the venue. I assume the 120-mile dash between Bournemouth and Coventry was just too difficult a journey for them.

Promoter Terry Blood announced to what was still left of an understandably angry audience that The Four Seasons had apparently got lost en route to The Matrix Hall and, although making to the venue, it too late for them to perform. For their inconvenience, and by way of an apology, Terry Blood offered the disappointed concert goers free tickets for his next major Coventry event which was to be the visit of another American - Jerry Lee Lewis. The Jerry Lee gig would also be held at The Matrix Hall later the same month. And apparently that peace offering seemed to pacify the crowd sufficiently.

Of course, The Four Seasons would go on to even greater success with the release of a string of other golden hits such as 'Rag Doll', 'Let's Hang On', 'Working My Way Back To You', 'Who Loves You' and 'December 1963 (Oh What a Night)'.

But, for very different reasons, that night back in May '63, sounded just as exciting.

A couple of Corrections from Martin Bird

My father was at the Matrix ballroom the night The Four Seasons apparently didn't play. They were late arriving because they got lost and did actually play three or four songs before being asked to leave the stage due to 'Lords Day observancy'. Dad says they were brilliant despite the short set. There were some protests however after the band left the stage and a young man (who my father worked with at Alfred Herberts) kicked the drum kit over. The disgruntled audience were all offered tickets for a Wednesday night show by Bee Bumble and the Stingers. Dad saw many bands at the Matrix during the 60s - Beatles/Stones. He recalls with relish, seeing a Birmingham band called Danny Kings Mayfair Set at the Sportsmans in Allesley too. John Mayalls Blues Breakers at the police ballroom Little Park Street was another gig he was fortunate to attend.

Anyway, I hope this corrects a few points.
All the best,  Martin Bird

I'm happy to be wrong in relation to fact that the Four Seasons did actually 3 or 4 numbers after they finally arrived. I must admit that the info I had was inconclusive as to if the band played or not!

However I do have a newspaper clipping where Terry Blood, the promoter mentions that free tickets were given away for a Jerry Lee Lewis gig.

To my knowledge B.Bumble only played Cov the once and that was in 1962 (The Four Seasons gig was 1963) so your info there was quite was useful.

As was the fact B.Bumble played on a Wednesday. The only gigs I had ever known for the Matrix were on Fridays and Saturdays.

I will do some more research on this -


The feedback was great to see though.