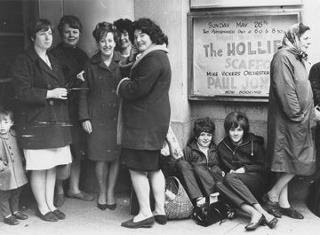 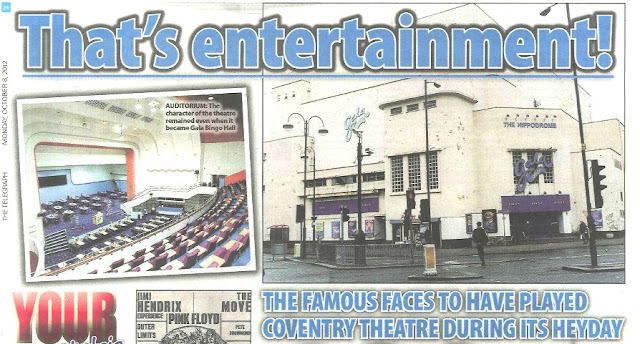 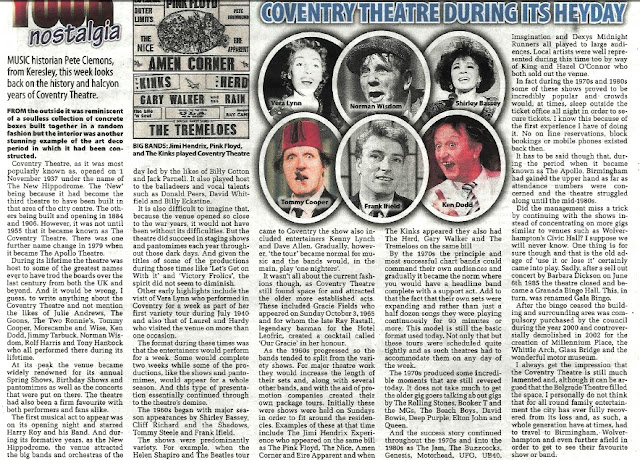 That's entertainment! THE FAMOUS FACES TO HAVE PLAYED COVENTRY THEATRE DURING ITS HEYDAY YOUR nostalgia MUSIC historian Pete Clemons, from Keresley, this week looks back on the history and halcyon years of Coventry Theatre.
FROM the outside it was reminiscent of a soulless collection of concrete boxes built together in a random fashion but the interior was another stunning example of the art deco period in which it had been constructed.

Coventry Theatre, as it was most popularly known as, opened on 1 November 1937 under the name of The New Hippodrome. The 'New' being because it had become the third theatre to have been built in that area of the city centre. The others being built and opening in 1884 and 1906. However, it was not until 1955 that it became known as The Coventry Theatre. There was one further name change in 1979 when it became The Apollo Theatre.

During its lifetime the theatre was host to some of the greatest names ever to have trod the boards over the last century from both the UK and beyond. And it would be wrong, I guess, to write anything about the Coventry Theatre and not mention the likes of Julie Andrews, The Goons, The Two Ronnie's, Tommy Cooper, Morecambe and Wise, Ken Dodd, Jimmy Tarbuck, Norman Wisdom, Rolf Harris and Tony Hancock who all performed there during its lifetime.

At its peak the venue became widely renowned for its annual Spring Shows, Birthday Shows and pantomimes as well as the concerts that were put on there. The theatre had also been a firm favourite with both performers and fans alike.

The first musical act to appear was on its opening night and starred Harry Roy and his Band. And during its formative years, as the New Hippodrome, the venue attracted the big bands and orchestras of the day led by the likes of Billy Cotton and Jack Parnell. It also played host to the balladeers and vocal talents such as Donald Peers, David Whitfield and Billy Eckstine.

It is also difficult to imagine that, because the venue opened so close to the war years, it would not have been without its difficulties. But the theatre did succeed in staging shows and pantomimes each year throughout those dark days. And given the titles of some of the productions during those times like 'Let's Get on With it' and 'Victory Frolics', the spirit did not seem to diminish.

Other early highlights include the visit of Vera Lynn who performed in Coventry for a week as part of her first variety tour during July 1940 and also that of Laurel and Hardy who visited the venue on more than one occasion.

The format during these times was that the entertainers would perform for a week. Some would complete two weeks while some of the productions, like the shows and pantomimes, would appear for a whole season. And this type of presentation essentially continued through to the theatre's demise.

The 1960s began with major season appearances by Shirley Bassey, Cliff Richard and the Shadows, Tommy Steele and Frank Ifield.

The shows were predominantly variety. For example, when the Helen Shapiro and The Beatles tour came to Coventry the show also included entertainers Kenny Lynch and Dave Allen. Gradually, however, 'the tour' became normal for music and the bands would, in the main, play 'one nighters'.

It wasn't all about the current fashions though, as Coventry Theatre still found space for and attracted the older more established acts. These included Gracie Fields who appeared on Sunday October 3, 1965 and for whom the late Ray Rastall, legendary barman for the Hotel Leofric, created a cocktail called 'Our Gracie' in her honour.

As the 1960s progressed so the bands tended to split from the variety shows. For major theatre work they would increase the length of their sets and, along with several other bands, and with the aid of promotion companies created their own package tours. Initially these were shows were held on Sundays in order to fit around the residencies.

Examples of these at that time include The Jimi Hendrix Experience who appeared on the same bill as The Pink Floyd, The Nice, Amen Corner and Eire Apparent and when The Kinks appeared they also had The Herd, Gary Walker and The Tremeloes on the same bill By the 1970s the principle and most successful chart bands could command their own audiences and gradually it became the norm where you would have a headline band complete with a support act. Add to that the fact that their own sets were expanding and rather than just a half dozen songs they were playing continuously for 90 minutes or more. This model is still the basic format used today. Not only that but these tours were scheduled quite tightly and as such theatres had to accommodate them on any day of the week.

The 1970s produced some incredible moments that are still revered today. It does not take much to get the older gig goers talking about gigs by The Rolling Stones, Booker T and the MGs, The Beach Boys, David Bowie, Deep Purple, Elton John and Queen.

And the success story continued throughout the 1970s and into the 1980s as The Jam, The Buzzcocks, Genesis, Motorhead, UFO, UB40, Imagination and Dexys Midnight Runners all played to large audiences.

Local artists were well represented during this time too by way of King and Hazel O'Connor who both sold out the venue.

In fact during the 1970s and 1980s some of these shows proved to be incredibly popular and crowds would, at times, sleep outside the ticket office all night in order to secure tickets. I know this because of the first experience I have of doing it. No on line reservations, block bookings or mobile phones existed back then.

It has to be said though that, during the period when it became known as The Apollo, Birmingham had gained the upper hand as far as attendance numbers were concerned and the theatre struggled along until the mid-1980s.

Did the management miss a trick by continuing with the shows instead of concentrating on more gigs similar to venues such as Wolverhampton's Civic Hall? I suppose we will never know. One thing is for sure though and that is the old adage of 'use it or lose it' certainly came into play. Sadly, after a sell out concert by Barbara Dickson on June 6th 1985 the theatre closed and became a Granada Bingo Hall. This, in turn, was renamed Gala Bingo.

After the bingo ceased the building and surrounding area was compulsory purchased by the council during the year 2000 and controversially demolished in 2002 for the creation of Millennium Place, the Whittle Arch, Glass Bridge and the wonderful motor museum.

I always get the impression that the Coventry Theatre is still much lamented and, although it can be argued that the Belgrade Theatre filled the space, I personally do not think that for all round family entertainment the city has ever fully recovered from its loss and, as such, a whole generation have at times, had to travel to Birmingham, Wolverhampton and even further afield in order to get to see their favourite show or band.

I can still hear Sister Morgan's voice KEITH Morris has replied to last week's article by Julie White about her time working at Gulson Hospital.

He said: "I too worked at Gulson Road Hospital in the 50s. I can still hear Sister Morgan's dulcet tones wafting over the corridor from the nurses' lecture rooms, which in those days were opposite the laboratory where I worked.

"I attach a rather dilapidated picture from the then Coventry Evening Telegraph of a pantomime cast (probably Christmas 1950) and a quote from a later Christmas show (1956 or 57) when the then hospital management committee was considering building a new hospital at Walsgrave. "He led with distinction a party of twenty, To far distant Spain to see Hospitals new.

But on Bullfights and Nightclubs They spent all our money, The lines are directed at Dr Jack Heather, a consultant physician who led the fact finders!" And still about buildings they Ne'er had a clue!!" Can you identify this house? JET Judson is seeking help with this picture of her grandmother's former home.

"We are trying so hard to find out whether this family house still exists in Coventry or if they have bulldozed it, unbelievably. It was called Nailcotes.

"We just found the photo and my father can remember my grandma talking about it when she lived there as a child.

"Thank you for any help you and the readers can give, it would make my dad's day if anyone knew anything." 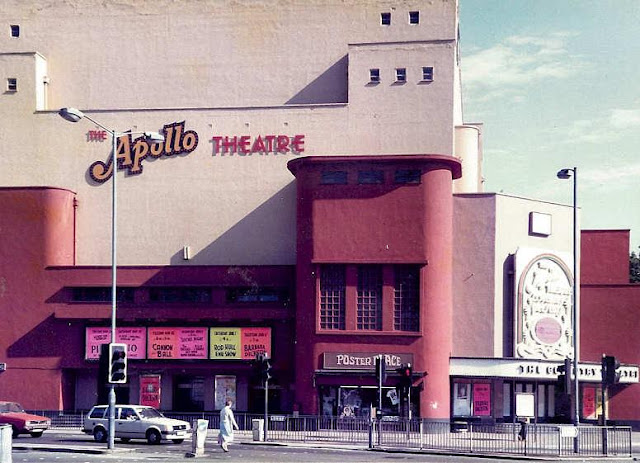 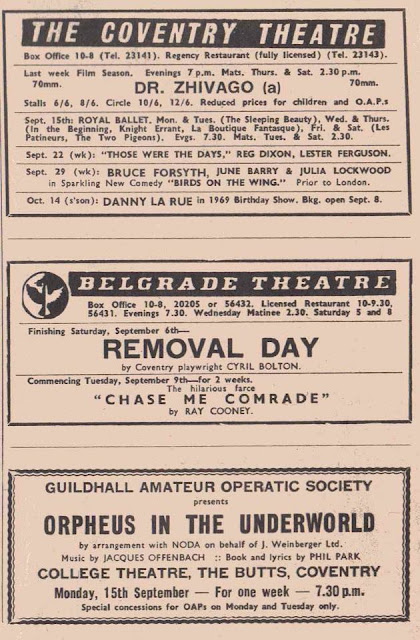 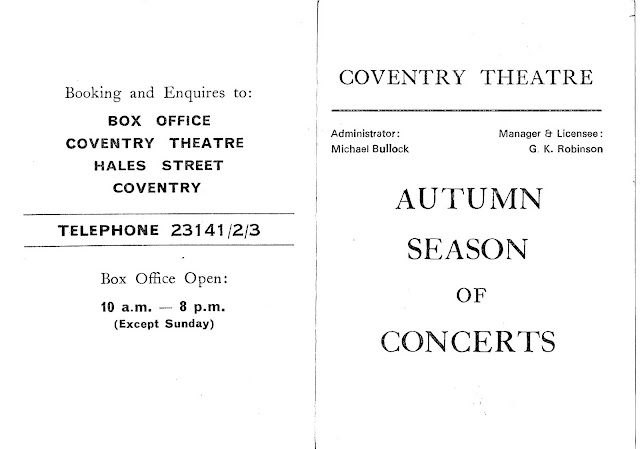 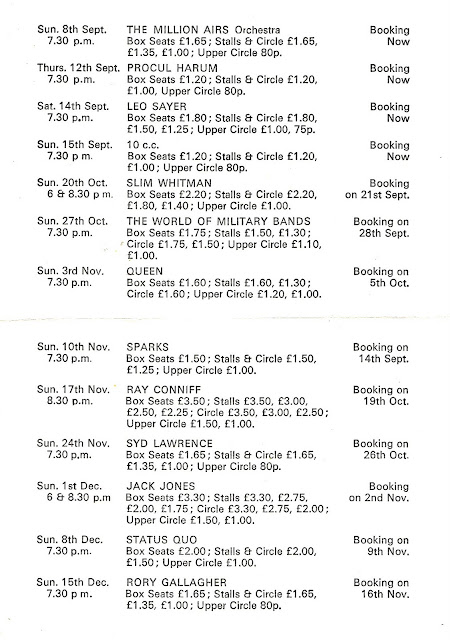