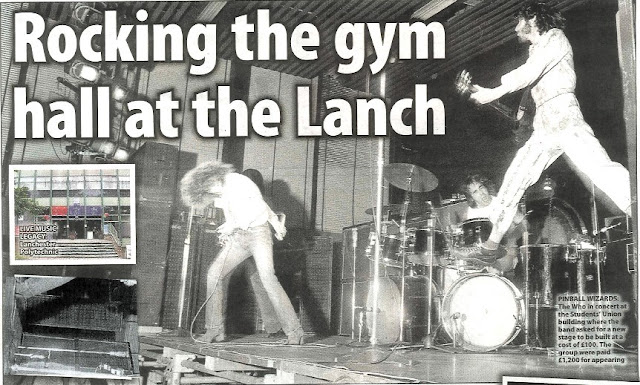 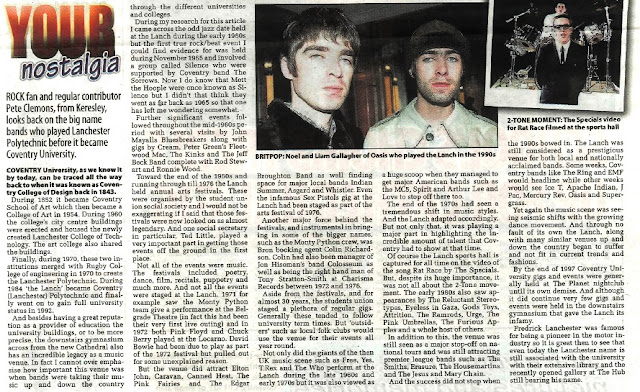 Rocking the gym hall at the Lanch; YOUR nostalgia ROCK fan and regular contributor Pete Clemons, from Keresley, looks back on the big name bands who played Lanchester Polytechnic before it became Coventry University.

COVENTRY University, as we know it by today, can be traced all the way back to when it was known as Coventry College of Design back in 1843. During 1852 it became Coventry School of Art which then became a College of Art in 1954. During 1960 the college's city centre buildings were erected and housed the newly created Lanchester College of Technology.

Finally, during 1970, these two institutions merged with Rugby College of engineering in 1970 to create the Lanchester Polytechnic. During 1984 'the Lanch' became Coventry (Lanchester) Polytechnic and finally went on to gain full university status in 1992.

And besides having a great reputation as a provider of education the university buildings, or to be more precise, the downstairs gymnasium across from the new Cathedral also has an incredible legacy as a music venue. In fact I cannot over emphasise how important this venue was when bands were taking their music up and down the country through the different universities and colleges.

During my research for this article I came across the odd jazz date held at the Lanch during the early 1960s but the first true rock/beat event I could find evidence for was held during November 1965 and involved a group called Silence who were supported by Coventry band The Sorrows. Now I do know that Mott the Hoople were once known as Silence but I didn't that think they went as far back as 1965 so that one has left me wondering somewhat.

Toward the end of the 1960s and running through till 1976 the Lanch held annual arts festivals. These were organised by the student union social society and I would not be exaggerating if I said that those festivals were now looked on as almost legendary. And one social secretary in particular, Ted Little, played a very important part in getting those events off the ground in the first place.

Not all of the events were music. The festivals included poetry, dance, film, recitals, puppetry and much more. And not all the events were staged at the Lanch. 1971 for example saw the Monty Python team give a performance at the Belgrade Theatre (in fact this had been their very first live outing) and in 1972 both Pink Floyd and Chuck Berry played at the Locarno. David Bowie had been due to play as part of the 1972 festival but pulled out for some unexplained reason.

But the venue did attract Elton John, Caravan, Canned Heat, The Pink Fairies and The Edgar Broughton Band as well finding space for major local bands Indian Summer, Asgard and Whistler. Even the infamous Sex Pistols gig at the Lanch had been staged as part of the arts festival of 1976.

Another major force behind the festivals, and instrumental in bringing in some of the bigger names, such as the Monty Python crew, was Bron booking agent Colin Richardson.

Colin had also been manager of Jon Hiseman's band Colosseum as well as being the right hand man of Tony Stratton-Smith at Charisma Records between 1972 and 1976.

Aside from the festivals, and for almost 30 years, the students union staged a plethora of regular gigs. Generally these tended to follow university term times. But 'outsiders' such as local folk clubs would use the venue for their events all year round.

Not only did the giants of the then UK music scene such as Free, Yes, T.Rex and The Who perform at the Lanch during the late 1960s and early 1970s but it was also viewed as a huge scoop when they managed to get major American bands such as the MC5, Spirit and Arthur Lee and Love to stop off there too.

The end of the 1970s had seen a tremendous shift in music styles. And the Lanch adapted accordingly. But not only that, it was playing a major part in highlighting the incredible amount of talent that Coventry had to show at that time.

Of course the Lanch sports hall is captured for all time on the video of the song Rat Race by The Specials. But, despite its huge importance, it was not all about the 2-Tone movement.

The early 1980s also saw appearances by The Reluctant Stereotypes, Eyeless in Gaza, Gods Toys, Attrition, The Ramrods, Urge, The Pink Umbrellas, The Furious Apples and a whole host of others. In addition to this, the venue was still seen as a major stop-off on national tours and was still attracting premier league bands such as The Smiths, Erasure, The Housemartins and The Jesus and Mary Chain.

And the success did not stop when the 1990s bowed in. The Lanch was still considered as a prestigious venue for both local and nationally acclaimed bands. Some weeks, Coventry bands like The Ring and EMF would headline while other weeks would see Ice T, Apache Indian, J Pac, Mercury Rev, Oasis and Supergrass.

Yet again the music scene was seeing seismic shifts with the growing dance movement. And through no fault of its own the Lanch, along with many similar venues up and down the country began to suffer and not fit in current trends and fashions.

Fredrick Lanchester was famous for being a pioneer in the motor industry so it is great then to see that even today the Lanchester name is still associated with the university with their extensive library and the recently opened gallery at The Hub still bearing his name.
...............................

Relevant links for more information from the Hobo Magazine site.

Lanchester polytechnic Gigs of the 1970's - Youtubes of many of the bands.
http://lanchesterpolybands.blogspot.co.uk/

Interviews with Colin Richardson who was the Bron Agency Booking agent for the Lanch.....

Monty Python - the story behind them playing at the Belgrade for the Lanch Arts Festival
http://covdiscoarchive.blogspot.co.uk/2013/11/colin-richardson-interview-part-6-monty.html

Ted Little organiser / social secretary of the Lanch Poly Student Union who organised many of the events at the Lanch.
http://coventrymusichistory.typepad.com/blog/2009/02/ted-little-and-the-lanchester-arts-festival-coventry.html