Yet more from the man Peter Clemons - this time focusing on the Co-op Hall  Venue Nuneaton...from the Coventry Telegraph.

(Readable text below the graphic) 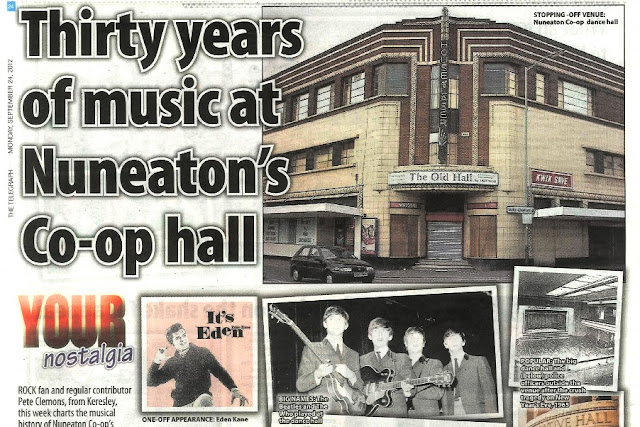 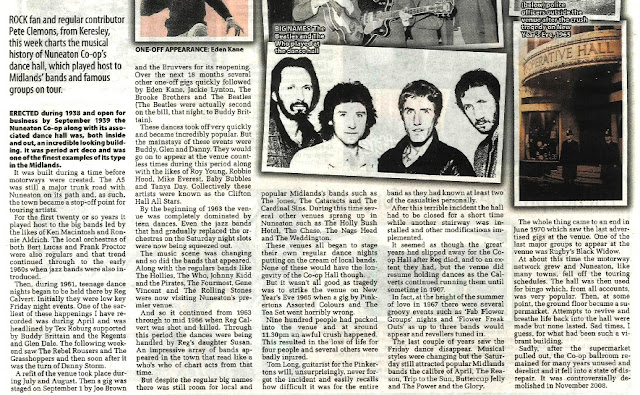 ERECTED during 1938 and open for business by September 1939 the Nuneaton Co-op along with its associated dance hall was, both inside and out, an incredible looking building.

It was period art deco and was one of the finest examples of its type in the Midlands.

It was built during a time before motorways were created. The A5 was still a major trunk road with Nuneaton on its path and, as such, the town became a stop-off point for touring artists.

For the first twenty or so years it played host to the big bands led by the likes of Ken Macintosh and Ronnie Aldrich. The local orchestras of both Bert Lucas and Frank Proctor were also regulars and that trend continued through to the early 1960s when jazz bands were also introduced.

Then, during 1961, teenage dance nights began to be held there by Reg Calvert. Initially they were low key Friday night events. One of the earliest of these happenings I have recorded was during April and was headlined by Tex Roburg supported by Buddy Brittain and the Regents and Glen Dale. The following weekend saw The Rebel Rousers and The Grasshoppers and then soon after it was the turn of Danny Storm.

A refit of the venue took place during July and August. Then a gig was staged on September 1 by Joe Brown and the Bruvvers for its reopening. Over the next 18 months several other one-off gigs quickly followed by Eden Kane, Jackie Lynton, The Brooke Brothers and The Beatles (The Beatles were actually second on the bill, that night, to Buddy Brittain).

These dances took off very quickly and became incredibly popular. But the mainstays of these events were Buddy, Glen and Danny. They would go on to appear at the venue countless times during this period along with the likes of Roy Young, Robbie Hood, Mike Everest, Baby Bubbles and Tanya Day. Collectively these artists were known as the Clifton Hall All Stars.

By the beginning of 1963 the venue was completely dominated by teen dances. Even the jazz bands that had gradually replaced the orchestras on the Saturday night slots were now being squeezed out.

The music scene was changing and so did the bands that appeared. Along with the regulars bands like The Hollies, The Who, Johnny Kidd and the Pirates, The Fourmost, Gene Vincent and The Rolling Stones were now visiting Nuneaton's premier venue.

And so it continued from 1963 through to mid 1966 when Reg Calvert was shot and killed. Through this period the dances were being handled by Reg's daughter Susan. An impressive array of bands appeared in the town that read like a who's who of chart acts from that time.

But despite the regular big names there was still room for local and popular Midlands's bands such as The Jones, The Cataracts and The Cardinal Sins. During this time several other venues sprang up in Nuneaton such as The Holly Bush Hotel, The Chase, The Nags Head and The Weddington.

These venues all began to stage their own regular dance nights putting on the cream of local bands. None of these would have the longevity of the Co-op Hall though. But it wasn't all good as tragedy was to strike the venue on New Year's Eve 1965 when a gig by Pinkertons Assorted Colours and The Tea Set went horribly wrong.

Nine hundred people had packed into the venue and at around 11.30pm an awful crush happened. This resulted in the loss of life for four people and several others were badly injured.

Tom Long, guitarist for the Pinkertons will, unsurprisingly, never forget the incident and easily recalls how difficult it was for the entire band as they had known at least two of the casualties personally.

After this terrible incident the hall had to be closed for a short time while another stairway was installed and other modifications implemented.

It seemed as though the 'great' years had slipped away for the Coop Hall after Reg died, and to an extent they had, but the venue did resume holding dances as the Calverts continued running them until sometime in 1967.

In fact, at the height of the summer of love in 1967 there were several groovy events such as 'Fab Flower Groups' nights and 'Flower Freak Outs' as up to three bands would appear and revellers tuned in.

The last couple of years saw the Friday dance disappear. Musical styles were changing but the Saturday still attracted popular Midlands bands the calibre of April, The Reason, Trip to the Sun, Buttercup Jelly and The Power and the Glory.

The whole thing came to an end in June 1970 which saw the last advertised gigs at the venue. One of the last major groups to appear at the venue was Rugby's Black Widow.

At about this time the motorway network grew and Nuneaton, like many towns, fell off the touring schedules. The hall was then used for bingo which, from all accounts, was very popular. Then, at some point, the ground floor became a supermarket.

Attempts to revive and breathe life back into the hall were made but none lasted. Sad times, I guess, for what had been such a vibrant building.

Sadly, after the supermarket pulled out, the Co-op ballroom remained for many years unused and derelict and it fell into a state of disrepair.

It was controversially demolished in November 2008.
Posted by Coventry Music Scene Archive at 11:12 PM