Yet another from the Pete Clemons camp for the Coventry Telegraph, charting the history Pinkerton's Assorted Colours, whose biggest hit - Mirror Mirror, charted in 1966. 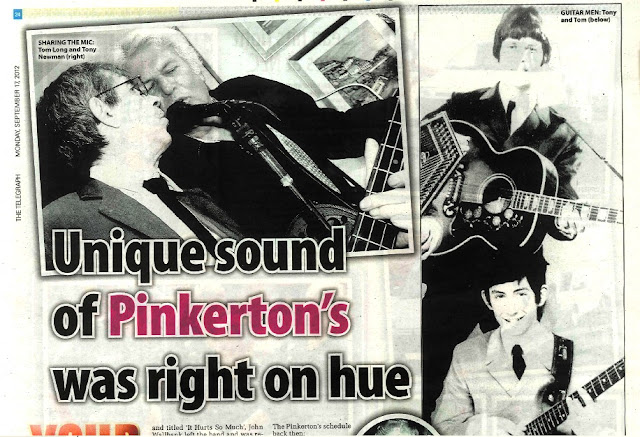 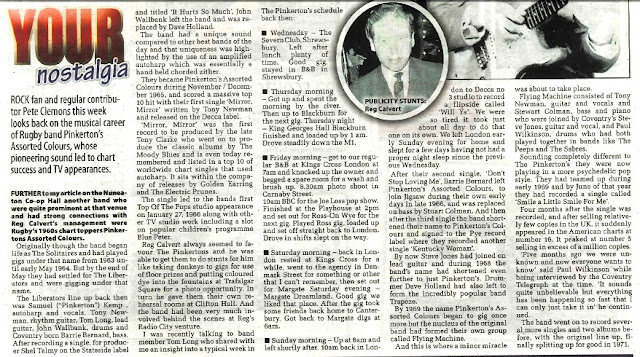 Unique sound of Pinkerton's was right on hue; YOUR nostalgia ROCK fan and regular contributor Pete Clemons this week looks back on the musical career of Rugby band Pinkerton's Assorted Colours, whose pioneering sound led to chart success and TV appearances. 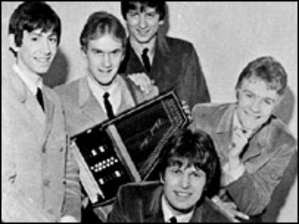 prominent at that venue and had strong connections with Reg Calvert's management were Rugby's 1960s chart toppers Pinkertons Assorted Colours.

Originally though the band began life as The Solitaires and had played gigs under that name from 1963 until early May 1964. But by the end of May they had settled for The Liberators and were gigging under that name.

The Liberators line up back then was Samuel ("Pinkerton") Kemp , autoharp and vocals, Tony Newman, rhythm guitar, Tom Long, lead guitar, John Wallbank, drums and Coventry born Barrie Bernard, bass. After recording a single, for producer Shel Talmy on the Stateside label and titled 'It Hurts So Much', John Wallbank left the band and was replaced by Dave Holland.

The band had a unique sound compared to other beat bands of the day and that uniqueness was highlighted by the use of an amplified autoharp which was essentially a hand held chorded zither.

They became Pinkerton's Assorted Colours during November / December 1965, and scored a massive top 10 hit with their first single 'Mirror, Mirror' written by Tony Newman and released on the Decca label.

'Mirror, Mirror' was the first record to be produced by the late Tony Clarke who went on to produce the classic albums by The Moody Blues and is even today remembered and listed in a top 10 of worldwide chart singles that used autoharp. It sits within the company of releases by Golden Earring and The Electric Prunes.

The single led to the bands first Top Of The Pops studio appearance on January 27, 1966 along with other TV studio work including a slot on popular children's programme Blue Peter.

Reg Calvert always seemed to favour The Pinkertons and he was able to get them to do stunts for him like taking donkeys to gigs for use of floor prizes and putting coloured dye into the fountains at Trafalgar Square for a photo opportunity. In turn he gave them their own rehearsal rooms at Clifton Hall. And the band had been very much involved behind the scenes at Reg's Radio City venture.

I was recently talking to band member Tom Long who shared with me an insight into a typical week in The Pinkerton's schedule back then: * Wednesday - The Severn Club, Shrewsbury.

Left after lunch plenty of time. Good gig, stayed in B&B in Shrewsbury.

PUBLICITY Re* Thursday morning - Got up and spent the morning by the river. Then up to Blackburn for the next gig. Thursday night - King Georges Hall Blackburn finished and loaded up by 1 am. Drove steadily down the M1, * Friday morning - got to our regular B&B at Kings Cross London at 7am and knocked up the owner and begged a spare room for a wash and brush up. 8.30am photo shoot in Carnaby Street.

10am BBC for the Joe Loss pop show. Finished at the Playhouse at 2pm and set out for Ross-On Wye for the next gig. Played Ross gig, loaded up and set off straight back to London. Drove in shifts slept on the way.

* Saturday morning - back in London rested at Kings Cross for a while, went to the agency

in Denmark Street for something or other that I can't remember, then set out for Margate Saturday evening - Margate Dreamland. Good gig we liked that place. After the gig took some friends back home to Canterbury.

Got back to Margate digs at 6am.

Sunday morning - Up at 8am and left shortly after. 10am back in London STUNTS: Calvert to Decca no 3 studio to record a flipside called 'Will Ya'. We were so tired it took just about all day to do that one on its own. We left London early Sunday evening for home and slept for a few days having not had a proper night sleep since the previous Wednesday.

After their second single, 'Don't Stop Loving Me', Barrie Bernard left Pinkerton's Assorted Colours, to join Jigsaw during their own early days in late 1966, and was replaced on bass by Stuart Colman. And then after the third single the band shortened their name to Pinkerton's Colours and signed to the Pye record label where they recorded another single 'Kentucky Woman'.

By now Steve Jones had joined on lead guitar and during 1968 the band's name had shortened even further to just Pinkerton's. Drummer Dave Holland had also left to form the incredibly popular band Trapeze.

By 1969 the name Pinkerton's Assorted Colours began to gig once more but the nucleus of the original band had formed their own group called Flying Machine.

And this is where a minor miracle was about to take place.

Flying Machine consisted of Tony Newman, guitar and vocals and Stewart Colman, bass and piano who were joined by Coventry's Steve Jones, guitar and vocal, and Paul Wilkinson, drums who had both played together in bands like The Peeps and The Sabres.

Sounding completely different to The Pinkerton's they were now playing in a more psychedelic pop style. They had teamed up during early 1969 and by June of that year they had recorded a single called 'Smile a Little Smile For Me'.

Four months after the single was recorded, and after selling relatively few copies in the UK, it suddenly appeared in the American charts at number 16. It peaked at number 5 selling in excess of a million copies.

'Five months ago we were unknown and now everyone wants to know' said Paul Wilkinson while being interviewed by the Coventry Telegraph at the time. 'It sounds quite unbelievable but everything has been happening so fast that I can only just take it in' he continued.

The band went on to record several more singles and two albums before, with the original line up, finally splitting up for good in 1971.

Reg Calvert, one of pop's legendary managers and manager of the Fortunes, was living in 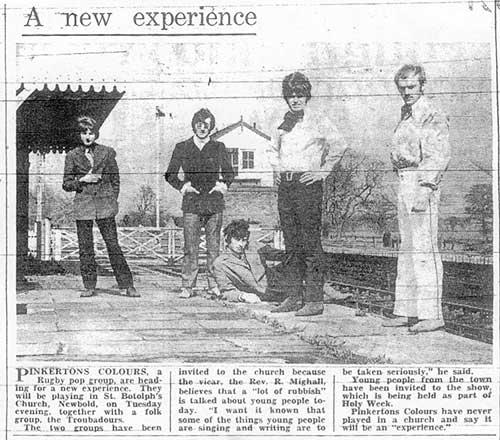 Clifton Hall, and spotted them when they were called The Liberators in Rugby in 1964. Following a brief hook-up with producer Shel Talmy, which resulted in one single, Wallbank exited the line-up, to be replaced by Dave Holland.The name came from Kempe adoption of a "posh" sounding name, and the groups array of colourful jackets. Their first pop single, Mirror Mirror, featured the jangling sound of Kempe's autoharp and is a pop classic. Tony Newman wrote this and another psyche classic "Magic horse", though sadly none of the other single achieved the success they deserved. They changed the name to Pinkerton's Colours and eventually eventually became Flying Machine. Steve James and Paul Wilkinson who joined the band later previously had been in the Peeps. Barrie Bernard later joined Jigsaw.

"..the first line-up of this band -- originally known as The Liberators -- was -

John Wallbank on the drums

Pinkerton's Assorted Colours adopted brightly colored costumes for their stage act. Their sound was an amalgam of folk and pop, highlighted by the use of an electric autoharp, which the band used in a manner somewhat similar to that of the Lovin' Spoonful. In late 1965, Pinkerton's Assorted Colours were signed to Decca Records, and they cut their debut single that year with future Moody Blues producer Tony Clarke. That record, "Mirror, Mirror," a band original written by Tony Newman, became a No. 8 British hit in 1966. They had one more minor chart entry, "Don't Stop Loving Me Baby," later in the year, but that was their last hit and after the failure of "Magic Rocking Horse," they left Decca to sign with Pye Records, and even a name change to "Pinkerton's Colours" didn't make their records more appealing."

Stuart Colman, Pinkerton’s one time bassist, went on to become a BBC Radio One DJ, and later a producer for Shakin' Stevens, Cliff Richard and Billy Fury.


And the B side She Don't Care

Don't stop me Loving Me