Pete Clemons with yet another portrayal of a Coventry legend - Ray King. the article is archived here on behalf of Pete Clemons. 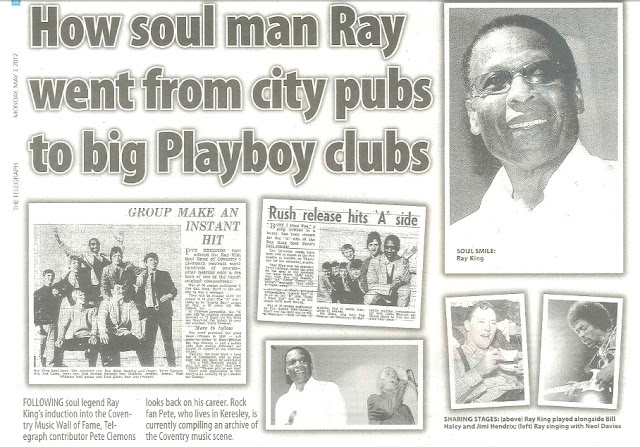 How soul man Ray went from city pubs to big Playboy clubs; FOLLOWING soul legend Ray King's induction into the Coventry Music Wall of Fame, Telegraph contributor Pete Clemons looks back on his career. Rock fan Pete, who lives in Keresley, is currently compiling an archive of the Coventry music scene. YOUR nostalgia.

It was a fascinating talk and it quickly became obvious that Ray is a man of different facets. It also revealed some news that I for one was incredibly excited to hear. More on that later but first a summary of Ray's lecture.

Vibert had been influenced by artists such as Sam Cooke and as diverse as Doris Day. 1965/66 saw him begin singing in the clubs of Coventry.

He then decided to take lessons in order to improve his voice. "But it was clear that he had a natural talent that did not need to be coached and the pounds 5 he had paid for those lessons was returned".

Quite by coincidence a friend of the singing teacher was a promoter and she agreed to get him bookings.

She also arranged for Vibert to have promotional photographs taken and secured his first real gig at the Craftsman Pub on the corner of Rotherham Road and Beake Avenue. Further gigs were arranged by Stan Brooks at venues like The Pilot Hotel on the corner of Burnaby Road. He then linked up with a band called Suzi and The Kingsize Kings.

Suzi left and at the same time Vibert became known as Ray King. The King Size Kings changed their name to the Ray King Soul Band (or Soul Pact as quite often advertised). Their first gig was at The Walsgrave Pub in Coventry and, under the management of David Owen, everything felt right.


"We knew we had something going on," revealed Ray. "We were so tight in our playing, I was able to control the band with just the slightest movement of my hand. Their eyes were on me all the time".

The band's reputation quickly spread and gigs were arranged for venues way beyond the Coventry boundaries. News of The Ray King Soul Band reached London and they were asked by the famous Playboy Club (The Playboy Clubs were a chain of nightclubs owned and operated by Playboy Enterprises under the guidance of Hugh Hefner until 1991) to go down there.

The Soul Band were offered a residency.

At times during the residency luminaries such as Frank Sinatra, Sammy Davies Jnr, Lulu, Ringo Starr, Maurice Gibb visited the club and saw the band perform.

In between Playboy Club gigs Ray and the band played London clubs like Revolution where they supported the likes of Bill Haley and the Comets. According to Ray it that at one of these gigs the band were joined on stage by Jimi Hendrix. "Being left handed Hendrix grabbed the bass guitar, turned it upside down, and played some incredible stuff".

Ray continued "Our time in London saw interest from Pye Records and we went to see them at their offices.

During a meeting with producer John Schroder and I had just began to sing when Lou Grade stuck his head out of his office and said 'sign him' and that was that". The band went on to make several singles for Pye.

They then signed to CBS Records and recorded a live album at the insistence of Hugh Hefner. The resulting album 'The Ray King Soul Band Live at the Playboy Club' was released on the Direction label (Direction 8-63394 1968) a subsidiary of CBS. This album is simply 40 minutes of the most high energy music you are ever likely to hear and covers songs such as Stevie Winwood's I'm a Man. Sadly the album has long been deleted and, to my knowledge, has never been released on CD. The band sadly split up in the 70s.

Next up for Ray was Pharaohs Kingdom. This band included the likes of Lynval Golding, Silverton Hutchinson and others he had met in Gloucester and who had moved to Coventry. Pharaohs Kingdom existed for a couple of years and gigged at the various nightclubs that existed at that time in Coventry. That association then led to Ray getting to know musicians such as Neol Davies and Jerry Dammers and together they formed a band called Night Trane. Regular rehearsals were held at the Bantam Pub in Hen Lane and Ray introduced Neol and Jerry to Ska music. Neol left the band and would eventually form The Selecter. Jerry also left the band and he would form what was to become The Specials. The rest, as they say, is history.

Since those days Ray has worked in management but has continued to help the West Indian Community where he is a great believer, advocate and champion of community spirit. He also runs a Saturday music school helps and offers advice to young offenders and is rightly proud when many come back and thank him. On November 23, 2010 Mr Vibert Cornwall was awarded an honorary degree of letters, by Coventry University, in recognition for his major contribution to music and his work in the community.

Ray's LP, 'live at the playboy club' has long been sought after by a lot of people - me included. Well it looks like our wait will not be for much longer. It is hoped that a CD copy will be released by Ray during 2012. On top of that he is also planning to record again. This will hopefully be an album of songs that Ray has had a lifetime of love for. Coupled with talk of an album launch and gig I suspect that a memorable night is destined for the future.

Previously King Size Kings, they were signed to Pye Records' Piccadilly label in January 1967 by Producer John Schroeder, who obviously had the successes of Geno Washington and Jimmy James in mind. 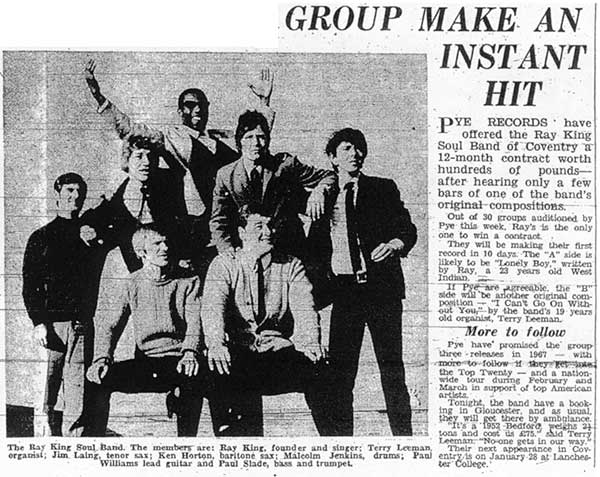 After 1968 the band famously lived entirely in hotels for 18 months while they toured - Lands End to Northern Scotland and on to France, Germany, Holland, Luxembourg, Switzerland, Spain, Italy, Belgium. The band worked Hamburg directly after the Beatles.

Leeman left to join The Peeps (later Rainbows) in January 1968.

Jenkins had previously been in The Pickwicks.

Ray went on to play with Pharaoh's Kingdom, Boss, Cyamde (charted in the US R&B listings, reaching Nos 5 & 6 with single and album respectively). He also coached French singer Johnny Halliday to sing in English (he recorded Stand By Me as instructed by Ray), and spent time with Bridgette Bardot).

Ray Borkowski remembers -
Ray King formed an 8 piece band sometime in 1972. We practiced for 6 months
but nothing came of the band.
It was though, a privilege to have co written several songs with him. He
was a gifted lyricist and I provided the melodies.

Neville Staples recalls in his autobiography
" Ray king touched the lives of three of the Specials very directly - me, Lynval Golding and Jerry Dammers but in very different ways. With me he launched Neville Staples on to the Sound System scene as a DJ in his own right. Lynval became part of the well established Coventry soul scene and Jerry ...


Ray came to England from the Carribbean island of St. Vincent and the Grenadines at the start of the 1960's. he arrived just in time for Cliff Richard and didn't get him at all. What he liked was the sound of Emile Ford and the Checkmates - a Jamaican-led pop group that got to No 1 in the UK charts in 1959 with Why Do you Want to make those eyes at me for?. Far better in Ray's view than Cliff's efforts.


Ray went from singing on the production line at a Morphy Richards iron factory in Northampton to being talent-spotted and propelled to fame in the 1960's as leader of the Ray King Soul Band. After a long residency at the Playboy Club in London, performing for the likes of Frank Sinatra, recording an album there and dispensing singing tips to French Crooner Johnny Halliday, ray came back to Coventry. he played to a bigger crowd at the Locarno than the Rolling Stones got around the same time." 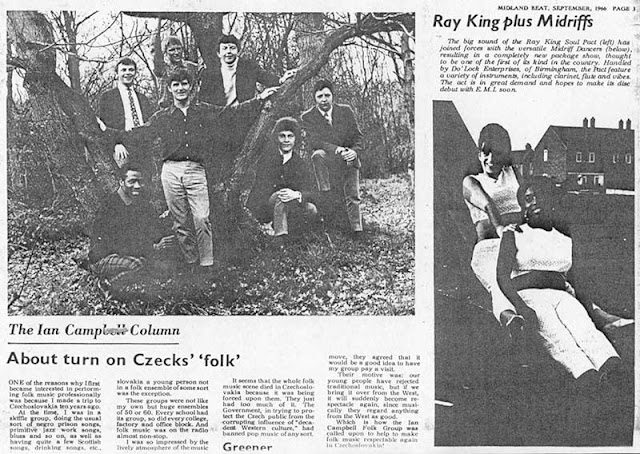 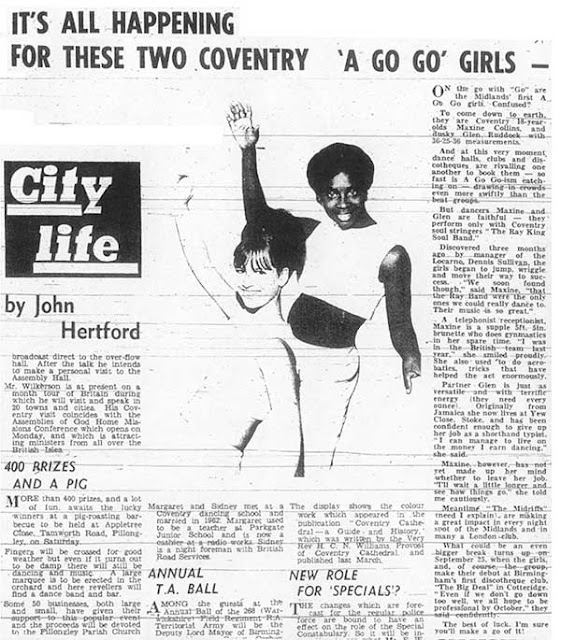 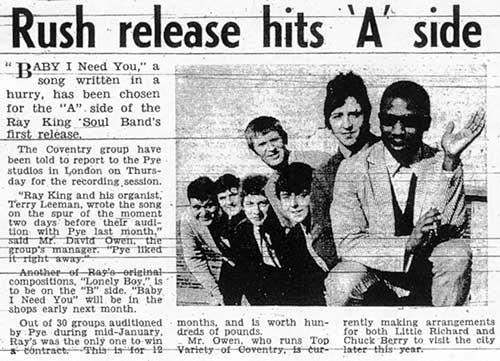