Peter Clemons with his article from the Coventry Telegraph.

Cathedral has been the Ruins of many a musical career!
(Text below the graphics) 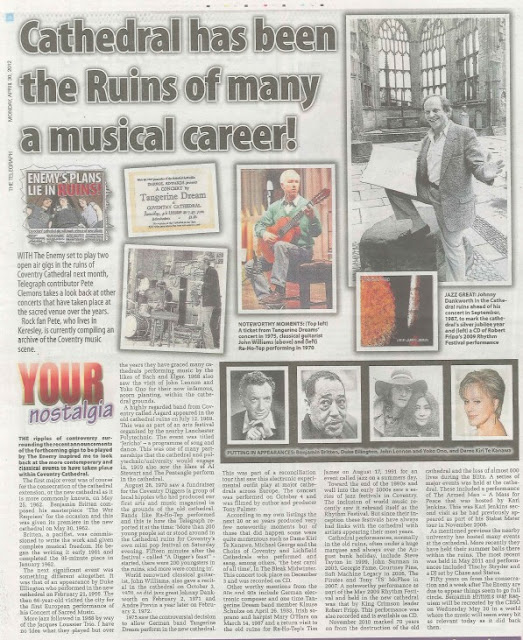 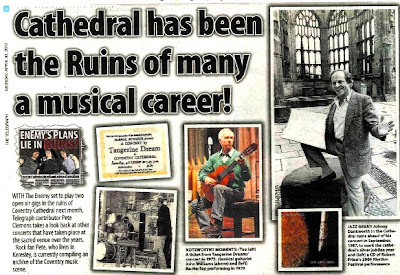 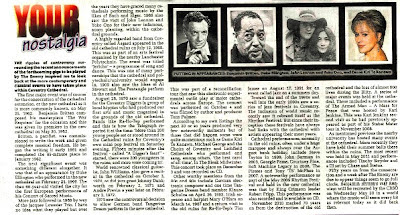 Cathedral has been the Ruins of many a musical career! WITH The Enemy set to play two open air gigs in the ruins of Coventry Cathedral next month, Telegraph contributor Pete Clemons takes a look back at other concerts that have taken place at the sacred venue over the years. Rock fan Pete, who lives in Keresley, is currently compiling an archive of the Coventry music nostalgia.

THE ripples of controversy surrounding the recent announcements of the forthcoming gigs to be played by The Enemy inspired me to look back at the more contemporary and classical events to have taken place within Coventry Cathedral.

The first major event was of course for the consecration of the cathedral extension, or the new cathedral as it is more commonly known, on May 25, 1962. Benjamin Britten composed his masterpiece 'The War Requiem' for the occasion and this was given its premiere in the new cathedral on May 30, 1962.

Britten, a pacifist, was commissioned to write the work and given complete musical freedom. He began the writing it early 1961 and completed the 85-minute piece in January 1962.

The next significant event was something different altogether. It was that of an appearance by Duke Ellington who performed in the new cathedral on February 21, 1966. The then 66-year-old visited the city for the first European performance of his Concert of Sacred Music.

More jazz followed in 1968 by way of the Jacques Loussier Trio. I have no idea what they played but over he years they have graced many cathedrals performing music by the likes of Bach and Elgar. 1968 also aw the visit of John Lennon and Yoko Ono for their now infamous, corn planting, within the cathedral grounds.

A highly regarded band from Coventry called Asgard appeared in the old cathedral ruins on July 12, 1969. This was as part of an arts festival organised by the nearby Lanchester Polytechnic. The event was titled 'Jericho' - a programme of song and dance. This was one of many partnerships that the cathedral and polytechnic/university would engage in. 1969 also saw the likes of Al Stewart and The Pentangle perform in the cathedral.

August 28, 1970 saw a fundraiser for the Coventry Diggers (a group of local hippies who 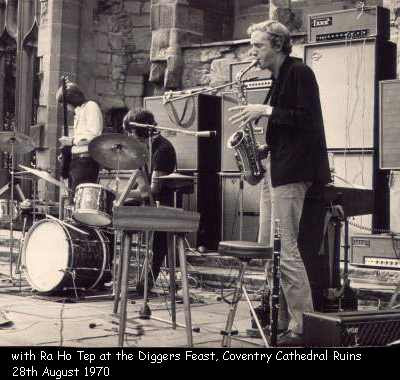 had produced our first arts and music magazine) in the grounds of the old cathedral. Bands like Ra-Ho-Tep performed and this is how the Telegraph reported it at the time: 'More than 200 young people sat or stood around in the Cathedral ruins for Coventry's own mini pop festival on Saturday evening. Fifteen minutes after the festival - called "A Digger's feast" - started, there were 200 youngsters in the ruins, and more were coming in'.

World renowned classical guitarist, John Williams, also gave a recital in the cathedral on October 3, 1970, as did jazz great Johnny Dankworth on February 2, 1971 and Andre Previn a year later on February 2, 1972.

This was part of a reconciliation tour that saw this electronic experimental outfit play at major cathedrals across Europe. The concert was performed on October 4 and was filmed by author and producer Tony Palmer.

According to my own listings the next 20 or so years produced very few noteworthy moments but of those that did happen some were quite momentous such as Dame Kiri Te Kanawa, Michael George and the Choirs of Coventry and Lichfield Cathedrals who performed and sang, among others, 'the best carol of all time', In The Bleak Midwinter. This concert took place on December 3 and was recorded on CD.

Other worthy mentions from the 80s and 90s include German electronic composer and one time Tangerine Dream band member Klause Schulze on April 26, 1983, Irish soprano and harpist Mary O'Hara on March 14, 1987 and a return visit to the old ruins for Ra-Ho-Tep's Tim James on August 17, 1991 for an event called jazz on a summers day.

Toward the end of the 1990s and well into the early 2000s saw a series of jazz festivals in Coventry. The inclusion of world music recently saw it rebrand itself as the Rhythm Festival. But since their inception these festivals have always had links with the cathedral with artists appearing their most years.

Cathedral performances, normally in the old ruins, often under a huge marquee and always over the August bank holiday, include Steve Tayton in 1999, John Surman in 2003, Georgie Fame, Courtney Pine, Soft Machine Legacy in 2006, The Pirates and Tony 'TS' McPhee in 2007. A noteworthy performance as part of the May 2009 Rhythm Festival and held in the new cathedral was that by King Crimson leader Robert Fripp. This performance was also recorded and is available on CD.

November 2010 marked 70 years on from the destruction of the old cathedral and the loss of almost 600 lives during the Blitz. A series of major events was held at the cathedral.

These included a performance of The Armed Man - A Mass for Peace that was hosted by Karl Jenkins. This was Karl Jenkins second visit as he had previously appeared as part of his Stabat Mater tour in November 2008.

As mentioned previous the nearby university has hosted many events at the cathedral. More recently they have held their summer balls there within the ruins. The most recent was held in May 2011 and performances included Tinchy Stryder and a DJ set by Chase and Status.

Fifty years on from the consecration and a week after The Enemy are due to appear things seem to go full circle. Benjamin Britten's War Requiem will be recreated by the CBSO on Wednesday May 30 in a world where the music will seem every bit as relevant today as it did back then.