Pete Clemons has been chalking up more articles in the Coventry telegraph, which on his behalf, we are archiving here. This article focuses the history of the Fortunes - 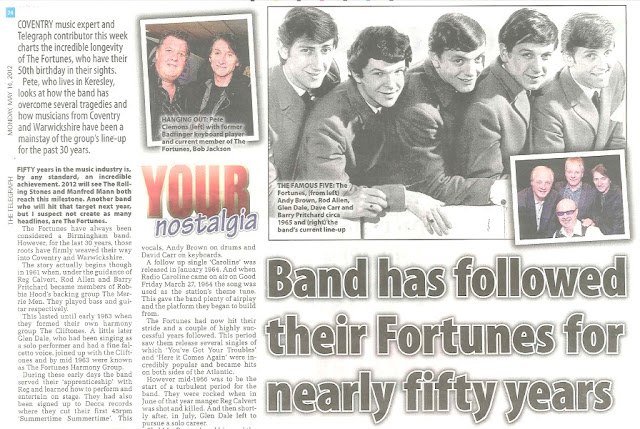 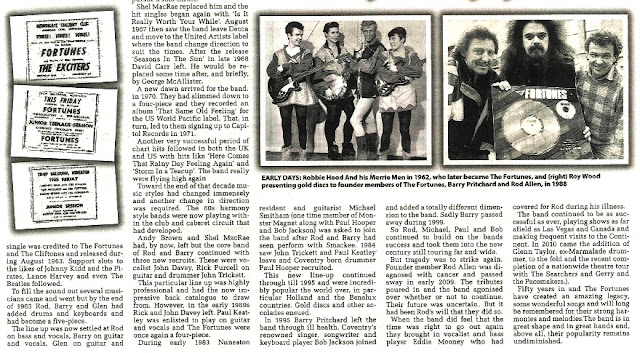 Band has followed their Fortunes for nearly fifty years; YOUR nostalgia COVENTRY music expert and Telegraph contributor this week charts the incredible longevity of The Fortunes, who have their 50th birthday in their sights. Pete, who lives in Keresley, looks at how the band has overcome several tragedies and how musicians from Coventry and Warwickshire have been a mainstay of the group's line-up for the past 30 years.

FIFTY years in the music industry is, by any standard, an incredible achievement. 2012 will see The Rolling Stones and Manfred Mann both reach this milestone. Another band who will hit that target next year, but I suspect not create as many headlines, are The Fortunes.

The Fortunes have always been considered a Birmingham band.

However, for the last 30 years, those roots have firmly weaved their way into Coventry and Warwickshire.

The story actually begins though in 1961 when, under the guidance of Reg Calvert, Rod Allen and Barry Pritchard became members of Robbie Hood's backing group The Merrie Men. They played bass and guitar respectively. This lasted until early 1963 when they formed their own harmony group The Cliftones. A little later Glen Dale, who had been singing as a solo performer and had a fine falcetto voice, joined up with the Cliftones and by mid 1963 were known as The Fortunes Harmony Group.

During these early days the band served their 'apprenticeship' with Reg and learned how to perform and entertain on stage. They had also been signed up to Decca records where they cut their first 45rpm 'Summertime Summertime'. This single was credited to The Fortunes and The Cliftones and released during August 1963. Support slots to the likes of Johnny Kidd and the Pirates, Lance Harvey and even The Beatles followed.

To fill the sound out several musicians came and went but by the end of 1963 Rod, Barry and Glen had added drums and keyboards and had become a five-piece.

A follow up single 'Caroline' was released in January 1964. And when Radio Caroline came on air on Good Friday March 27, 1964 the song was used as the station's theme tune. This gave the band plenty of airplay and the platform they began to build from.

The Fortunes had now hit their stride and a couple of highly successful years followed. This period saw them release several singles of which 'You've Got Your Troubles' and 'Here it Comes Again' were incredibly popular and became hits on both sides of the Atlantic.

However mid-1966 was to be the start of a turbulent period for the band. They were rocked when in June of that year manger Reg Calvert was shot and killed. And then shortly after, in July, Glen Dale left to pursue a solo career.

Shel MacRae replaced him and the hit singles began again with 'Is It Really Worth Your While'. August 1967 then saw the band leave Decca and move to the United Artists label where the band change direction to suit the times. After the release 'Seasons In The Sun' in late 1968 David Carr left. He would be replaced some time after, and briefly, by George McAllister.

A new dawn arrived for the band. in 1970. They had slimmed down to a four-piece and they recorded an album 'That Same Old Feeling' for the US World Pacific label. That, in turn, led to them signing up to Capitol Records in 1971.

Another very successful period of chart hits followed in both the UK and US with hits like 'Here Comes That Rainy Day Feeling Again' and 'Storm In a Teacup'. The band really were flying high again Toward the end of that decade music styles had changed immensely and another change in direction was required. The 60s harmony style bands were now playing within the club and caberet circuit that had developed.

Andy Brown and Shel MacRae had, by now, left but the core band of Rod and Barry continued with three new recruits. These were vocalist John Davey, Rick Purcell on guitar and drummer John Trickett.

This particular line up was highly professional and had the now impressive back catalogue to draw from. However, in the early 1980s Rick and John Davey left. Paul Keatley was enlisted to play on guitar and vocals and The Fortunes were once again a four-piece.

During early 1983 Nuneaton resident and guitarist Michael Smitham (one time member of Monster Magnet along with Paul Hooper and Bob Jackson) was asked to join the band after Rod and Barry had seen perform with Smackee. 1984 saw John Trickett and Paul Keatley leave and Coventry born drummer Paul Hooper recruited.

This new line-up continued through till 1995 and were incredibly popular the world over, in particular Holland and the Benelux countries. Gold discs and other accolades ensued.

In 1995 Barry Pritchard left the band through ill health. Coventry's renowned singer, songwriter and keyboard player Bob Jackson joined and added a totally different dimension to the band. Sadly Barry passed away during 1999.

So Rod, Michael, Paul and Bob continued to build on the bands success and took them into the new century still touring far and wide.

But tragedy was to strike again.

Founder member Rod Allen was diagnosed with cancer and passed away in early 2009. The tributes poured in and the band agonised over whether or not to continue. Their future was uncertain. But it had been Rod's will that they did so.

When the band did feel that the time was right to go out again they brought in vocalist and bass player Eddie Mooney who had covered for Rod during his illness.

The band continued to be as successful as ever, playing shows as far afield as Las Vegas and Canada and making frequent visits to the Continent.

In 2010 came the addition of Glenn Taylor, ex-Marmalade drummer, to the fold and the recent completion of a nationwide theatre tour with The Searchers and Gerry and the Pacemakers.).

Fifty years in and The Fortunes have created an amazing legacy, some wonderful songs and will long be remembered for their strong harmonies and melodies.The band is in great shape and in great hands and, above all, their popularity remains undiminished.
.................................
Fortunes with the Radio Caroline theme tune

A medley of clips taken of the Fortunes In Concert circa 2009.
The band line up then was Michael Smitham , Eddie Mooney, Paul Hooper and Bob Jackson,