Pete Clemons from the Coventry Telegraph.
Pete gives a history of the band nights at the Walsgrave in the 60's and 70's including Pete Waterman's Tuesday night progressive Music gigs 1970 / 71. 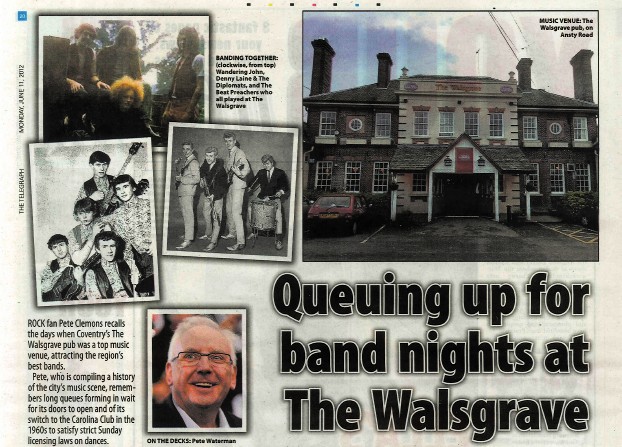 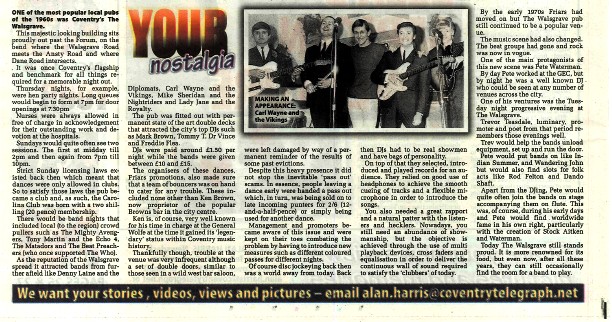 Queuing up for band nights at The Walsgrave; YOUR nostalgia ROCK fan Pete Clemons recalls the days when Coventry's The Walsgrave pub was a top music venue, attracting the region's best bands. Pete, who is compiling a history of the city's music scene, remembers long queues forming in wait for its doors to open and of its switch to the Carolina Club in the 1960s to satisfy strict Sunday licensing laws on dances.

ONE of the most popular local pubs of the 1960s was Coventry's The Walsgrave.

This majestic looking building sits proudly out past the Forum, on the bend where the Walsgrave Road meets the Ansty Road and where Dane Road intersects.

It was once Coventry's flagship and benchmark for all things required for a memorable night out. Thursday nights, for example, were hen party nights. Long queues would begin to form at 7pm for door openings at 7.30pm Nurses were always allowed in free of charge in acknowledgement for their outstanding work and devotion at the hospitals.

Sundays would quite often see two sessions. The first at midday till 2pm and then again from 7pm till 10pm.

Strict Sunday licensing laws existed back then which meant that dances were only allowed in clubs. So to satisfy those laws the pub became a club and, as such, the Carolina Club was born with a two shilling (20 pence) membership. There would be band nights that included local (to the region) crowd pullers such as The Mighty Avengers, Tony Martin and the Echo 4, The Matadors and The Beat Preachers (who once supported The Who). As the reputation of the Walsgrave spread it attracted bands from further afield like Denny Laine and the Diplomats, Carl Wayne and the Vikings, Mike Sheridan and the Nightriders and Lady Jane and the Royalty.

The pub was fitted out with permanent state of the art double decks that attracted the city's top DJs such as Mark Brown, Tommy T, Dr Vince and Freddie Flea.

DJs were paid around pounds 1.50 per night while the bands were given between pounds 10 and pounds 15.

The organisers of these dances, Friars promotions, also made sure that a team of bouncers was on hand to cater for any trouble. These included none other than Ken Brown, now proprietor of the popular Browns bar in the city centre.

Ken is, of course, very well known for his time in charge at the General Wolfe at the time it gained its 'legendary' status within Coventry music history.

Thankfully though, trouble at the venue was very infrequent although a set of double doors, similar to those seen in a wild west bar saloon, were left damaged by way of a permanent reminder of the results of some past evictions.

Despite this heavy presence it did not stop the inevitable 'pass out' scams. In essence, people leaving a dance early were handed a pass out which, in turn, was being sold on to late incoming punters for 2/6 (12-and-a-half-pence) or simply being used for another dance.

Management and promoters became aware of this issue and were kept on their toes combating the problem by having to introduce new measures such as different coloured passes for different nights.

Of course disc jockeying back then was a world away from today. Back then DJs had to be real showmen and have bags of personality.

On top of that they selected, introduced and played records for an audience.

They relied on good use of headphones to achieve the smooth cueing of tracks and a flexible microphone in order to introduce the songs.

You also needed a great rapport and a natural patter with the listeners and hecklers. Nowadays, you still need an abundance of showmanship, but the objective is achieved through the use of multi playback devices, cross faders and equalisation in order to deliver the continuous wall of sound required to satisfy the 'clubbers' of today.

By the early 1970s Friars had moved on but The Walsgrave pub still continued to be a popular venue.

The music scene had also changed.

The beat groups had gone and rock was now in vogue.

One of the main protagonists of this new scene was Pete Waterman.

By day Pete worked at the GEC, but by night he was a well known DJ who could be seen at any number of venues across the city.

One of his ventures was the Tuesday night progressive evening at The Walsgrave.

Trevor Teasdale, luminary, promoter and poet from that period remembers those evenings well.

Trev would help the bands unload equipment, set up and run the door.

Pete would put bands on like Indian Summer, and Wandering John but would also find slots for folk acts like Rod Felton and Dando Shaft.

Apart from the DJing, Pete would quite often join the bands on stage accompanying them on flute. This was, of course, during his early days and Pete would find worldwide fame in his own right, particularly with the creation of Stock Aitken and Waterman.

Today The Walsgrave still stands proud. It is more renowned for its food, but even now, after all these years, they can still occasionally find the room for a band to play. 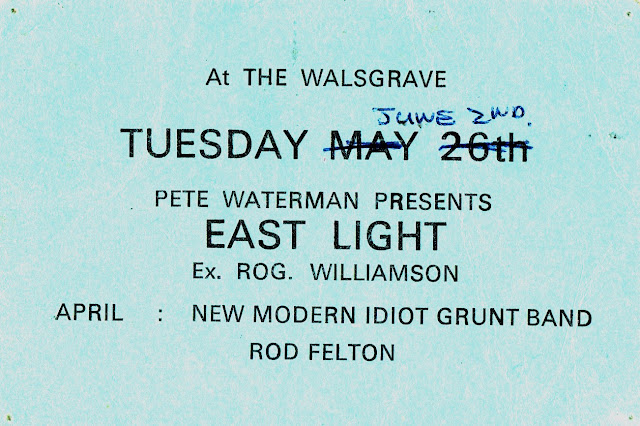 In this article Pete Clemons mentions that i (Trev Teasdel) helped with Pete Waterman's Tuseday night Progressive Music nights 1970 / 71. So below I've included a few tickets from those gigs. I used to do the door and help set up.  Pete and I both worked at the GEC Telecommunications at the time where Pete also the shop-steward. Pete had written some music to one of my lyrics (A Lotta rain is Fallin') while there and asked me help out at the Walsgrave. It meant I got in free and witnessed some great local bands, some of whom I knew and had put on at the Umbrella Club and a lot I hadn't.

Bands included Indian Summer, Wandering John, Last Fair Deal, Asgard, Rod Felton, New Modern Idiot Grunt band, April, Audience (from Birmingham),  Gypsies Kiss. Roger Williamson's East Light, Dando Shaft, Pantomime (Birmingham band), Skid Row, Flying Hat Band and many more.
I'd get there about 7pm and we'd open at 8pm. Pete would go through the records he was intending to play, current hits like - Yellow River, In the Summertime, Alright Now, soul and progressive tracks and oldies seg  The Small Faces, to name but a few. I'd help the bands in with their equipment, talk to him about music and on one occasion he introduced me to Rod Felton ( a solo contemporary folk and blues artist). The next week we went on walkabouts before the gig to Pete's parents house, (where the road is now named after him!). He'd be collecting bits of disco gear, and then caught the bus from Ball Hill to town calling in at a record shop near the arcade. Some of his fans from his Locarno discos would wave and call out to him. After that it was a trip up to Earlsdon Cottage - where they had jazz and folk nights. On this occasion  Rod Felton was on and was sitting on the grass playing guitar as we arrived. Pete had gone to collect his flute from Rod as he intended to play it later at the Walsgrave. Before we left Pete played some melodic flute to one of Rod Felton's songs. Sadly we didn't have mobile vids back then! 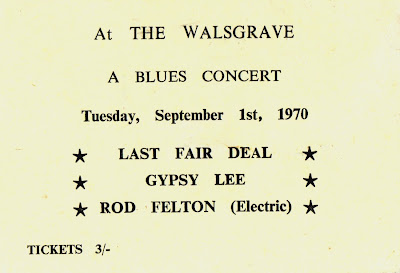 Gypsy Lee were on that night, a heavy R & B band and Pete got up to sing a raucous version of Rock me Baby, giving the flute some welly Jethro Tull style. They were popular nights with some good music and some good bands. Pete was a workaholic, DJing 7 nights a week and working at the GEC during the day - until about 1973 when he left to open Soul Hole Records. 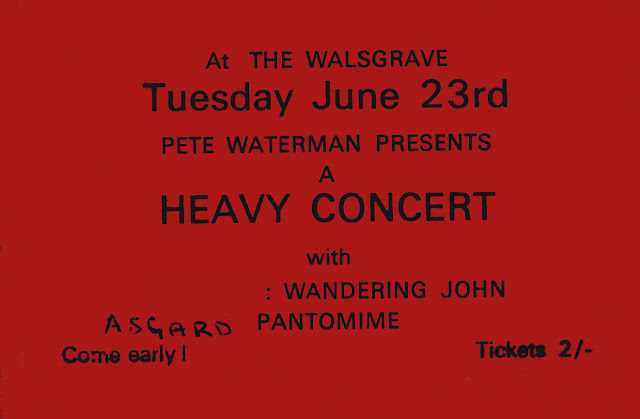 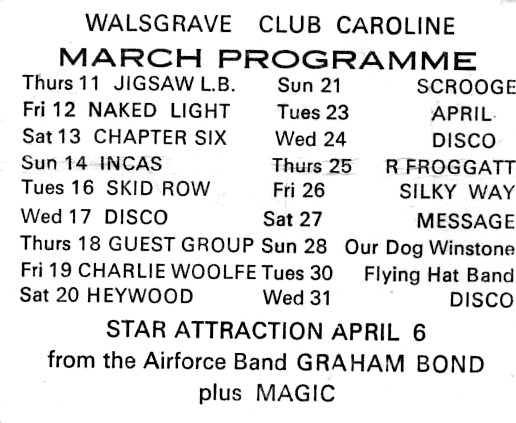 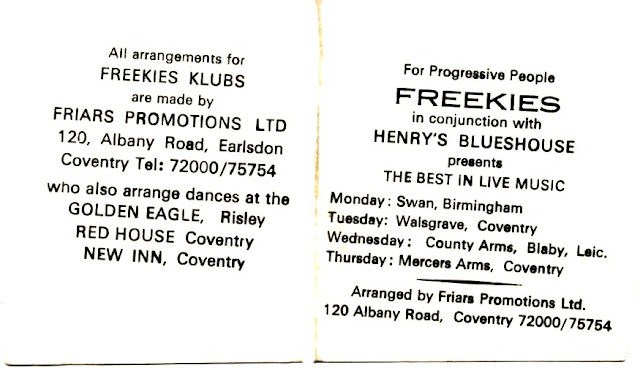