First main Pete Clemons article for the Coventry Telegraph in 2015, this time remembering the 80's hit band The Primitives who reformed.


Do you remember Coventry band The Primitives?

Can anyone remember The Primitives?

The Coventry band that had hits such as ‘Stop Killing Me’ and ‘Out of Reach’. Not forgetting, of course, 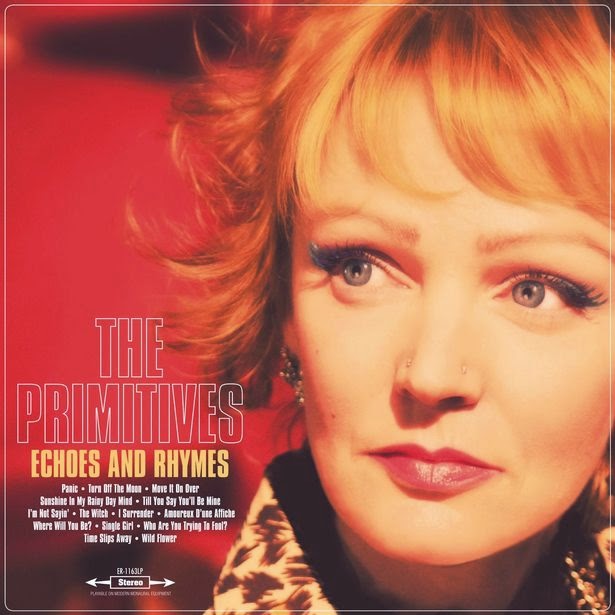 their biggest hit, ‘Crash’, which saw chart success on both sides of the Atlantic and which also surfaced on the soundtrack of the film Dumb and Dumber.

In fact, during 2008, Mojo Magazine voted The Primitives’ second single ‘Really Stupid’ as one of the Top 40 UK indie singles of all time.

Well for those that do remember them, then you are more than likely to be aware that, after a period of well over 20 years, they returned with an album of fresh and new material.

The Primitives new album titled ‘Spin-O-Rama’ was released on October 13, 2014 on the band’s own Elefant Records label and does not appear to have lost any of the chemistry that once made them so very popular.

The Primitives formed during 1985 and created catchy and jangly songs that seemed to be influenced by 1960s pop and psychedelia. They were initially classed as an ‘indie’ group and released their songs on their own label which was called Lazy. In fact one of their early songs was actually titled ‘Lazy’.

The band then went on to sign up for RCA records. This was around about 1987/88. While at RCA they released more original material but also re-recorded some of their earlier Lazy label songs.

These re-recordings were for their first RCA album ‘Lovely’, released in 1988. Two more albums were released on RCA, titled ‘Pure’ and ‘Galore’, before the group disbanding in the early 1990s before finally calling it a day in 1992.

The Primitives actually got back together during 2009 and, by October of the same year, they had played their first reformed gigs. These were fairly low key affairs and were held at The Herbert in Coventry and the Buffalo Bar in London.

But since then The Primitives have been gigging more regularly at home and abroad. You may remember that they appeared at the Leamington Assembly during April 2010. And when they began to record together again The Primitives even enlisted the services of original producer and one time bass player Paul Samson who, of course, should need no explanation as to his role within Coventry music history.


Apart from new bassist Raphael Moore the rest of the band should, also, not require any introductions. Although Raphael is new to The Primitives he is very much local to the city and was once a member of acclaimed Coventry band The Furious Apples.

But for those who are new to the band they consist of original members from the classic period, and who made four appearances on Top of the Pops, namely Tracy Cattell aka Tracy Tracy on vocals, principal song writer Paul Court on guitars and vocals and Richard ‘Tig’ Williams on the drums.

It was actually tragic circumstances in February 2009 that got Paul, Tracy and Tig to get back in contact
with each other again and which ultimately led to the band’s reformation. This of course was the untimely death of the band’s founding member and bass player Steve Dullaghan. (Hobo magazine did a tribute to Steve here http://coventrymusichistory.typepad.com/blog/2009/02/the-primitives-coventry-band-tribute-to-steve-dullaghan.html

The Hobo Article on Steve 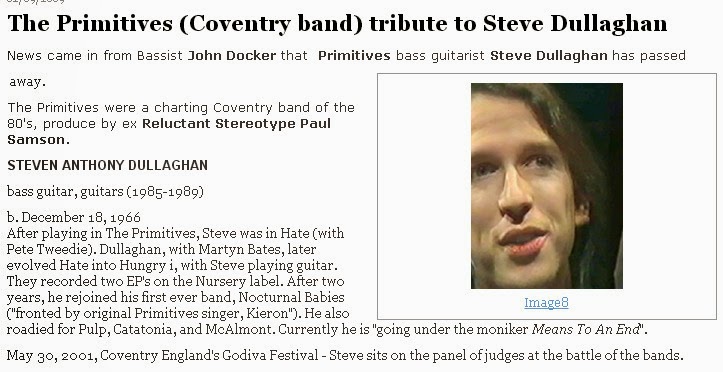 An EP release during March 2011, which featured two original songs alongside two cover versions, became the first real fruits of recorded music from the reformed band.

And then, during 2012, an album titled ‘Echoes and Rhymes’ appeared. It was essentially a covers album and contained fourteen relatively obscure tracks. But what an album it turned out to be. The songs covered, which included hidden gems like ‘Panic’ by Reparata and the Delrons, Sandy Posey’s ‘Single Girl’ and Nico’s ‘I’m Not Sayin’, were certainly given a whole new lease of life. I assume that the tracks involved were pulled together by Paul Court as I understand that he is a serious collector of rare and hard to find 45rpm vinyl records.

During the band's hiatus Tracy never went down the route of a solo artist. However, she contributed vocals to Band of Holy Joy among others, and also recorded with several outfits that worked in the dance music field. Tracy’s voice can also be heard on the short-lived, post-Primitives band Starpower’s cover of Nancy and Lees’s ‘Some Velvet Morning’.

In the meantime Paul Court continued to work with band member Tig, fronting post Primitives bands such as Starpower and Hedy. After a couple of singles were released Paul decided to give up music and moved into art and design. He sold his original artwork via his website Joypop Studio. Paul also began, and continues to, do DJ guest spots at London indie clubs.

After the various post-Primitives bands and projects, in which he was involved, had come to an end, Tig opened a shop called Pea Soup in Leamington Spa, selling hand crafted gifts and homeware items. He later went on to become a graphic designer. 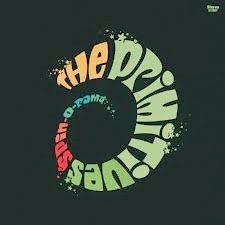 Spin-O-Rama, if you read the reviews, does not appear to disappoint. And the band apparently had a great time putting it together. In fact most of the reviews I have read have shown the band in a positive light. Some go as far as mentioning the album to be one of the better ones that they have heard during 2014.

The title track, which kicks off the album, was released earlier in the year as a 7-inch single. This instantly sold out on pre-orders alone.

If you feel in anyway sceptical about The Primitives’ reunion then let me try to reassure you. The band has lost none of their original sound as such. What they have done here is to recreate the same formula but at the same time inject more experience and maturity in their sound.
This is the link to original Coventry Telegraph Article article http://www.coventrytelegraph.net/whats-on/music-nightlife-news/you-remember-coventry-band-primitives-8444204