It's been a while since we had a Pete Clemons post on here but pete is back in fine form looking at the musical history of Warwick University for the Coventry Telegraph.

Away from the city centre another area of Coventry with an incredibly rich pedigree in music, and the arts, is 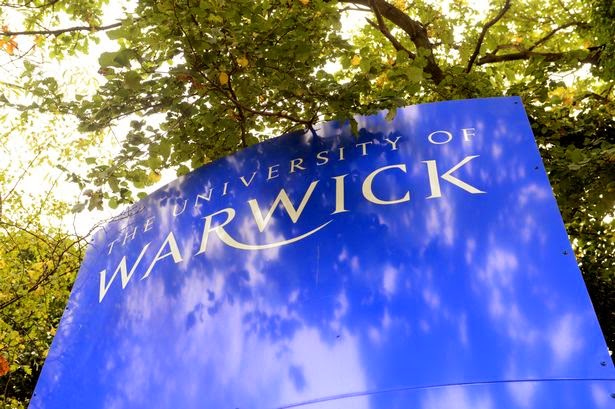 the 700-acre campus now known as The University of Warwick .

The University of Warwick, or Warwick University as it is more locally known, was first given government approval in 1961 and received its royal charter when it first opened during 1965.

Also out in that corner of the city, and already existing on what is now known as Westwood Campus in Kirby Corner Road, was the City of Coventry Training College for Women which first opened on the site in 1948. This, in turn, had replaced the Men’s Emergency College and was set up in a former wartime workers hostel to address a shortage of teachers.

When it became a mixed establishment during 1958 the City of Coventry Training College for Women also changed its name to the Coventry College of Education and, for many years, was more popularly known as Canley Teacher Training College .

Remarkably the principle of the teacher training college remained the same from when it opened and for almost its entire duration. And it was Miss Joan Browne who had fulfilled that role through to when she retired in July 1975.

After Miss Browne retired from the teaching college, which had been an entirely separate entity, it then became known as the Institute of Education and during 1978 was absorbed into Warwick University. The college, itself, was situated at what is now Arden House on the Westwood Campus .

The Coventry College of Education had its own campus and hall along with its own student union. A strong live music scene existed their during the late 1960s through to the mid 1970s and the venue attracted the likes of Status Quo, Stealers Wheel, Barclay James Harvest, Genesis, The Average White Band, Dando Shaft and Fairport Convention among many other visitors.

Warwick University also had, and continues to have, a strong students union. The campus has, for many years, staged an annual arts festival. And those festivals, particularly those held during March throughout most of the 1970s, were fairly high profile. A whole weekend was taken up by a host of live concerts of all kinds, workshops, plays and poetry recitals. During their lifetime these festivals attracted bands such as The Pink Fairies, Caravan, Gong, Al Stewart, Osibisa and Desmond Dekker.

Apart from the festivals the venue became an important stop-off on the college circuit, which in itself was an important rung on the ladder to get on, and witnessed the appearance of many bands making their way in the music business like Pink Floyd, Mott the Hoople and The Wailers who, of course, included Bob Marley.

Warwick University also had a strong folk club which was quite pivotal in the area during the 1970s. Visits were made by Bert Jansch, Harvey Andrews, Dick Gaughan and Jasper Carrott among many others.

But if the 1970s saw some major talent play Warwick University then it has to be said that the 1980s saw a real purple patch for the university as both the ever growing Arts Centre and the student union were both attracting some serious names.

In 1970, five years after it opened, the University of Warwick, commissioned the building of an arts centre. The building, itself, comprised of a main theatre and a studio theatre. But it also housed a host of other facilities. The opening ceremony of the Arts Centre, during October 1974, was attended by the likes of actress Dame Peggy Ashcroft and composer Leonard Bernstein. Without doubt this building enhanced the university’s stature within the arts world.

The Smiths, Simply Red, REM, Steel Pulse, U2, Talk Talk along with a host of local bands such as The Pink Umbrellas, King and, of course, The Specials all performed at either the student union venue or at the Arts Centre. I barely scratch the surface here. The list is actually quite substantial and just absolutely staggering.

Over time, of course, the Arts Centre would grow and this development saw the 1,500 all-seated Butterworth Hall completed in January 1981 with the Mead gallery following on in 1986.

By the end of the 1980s, however, times had changed and despite visits by bands such as Radiohead and The Cardiacs the early 1990s began to highlight an issue that needed to be addressed. The music being provided by the university entertainments team was seen as becoming outdated. A questionnaire was submitted to the then current crop of students and the responses clearly highlighted that a ‘limited range of acts was being asked to appear’.

Club culture was growing and an upsurge in more regular events was required to provide entertainment every night of the week. The student entertainments team responded positively by introducing a variety of sounds. All of a sudden indie, rock, jazz, funk, soul, house, pop, R’n’B, 70s and 80s nostalgia were all being showcased at the university. Despite this, the bands still appeared, but the regularity of them diminished.

The festivals were revived during 2002 by way of the Warwick Student Arts Festival (WSAF) with the aim of showcasing and celebrating all aspects of student art. It features a programme of events including plays, musicals, dance, film, orchestras, choirs and bands. All the events are normally free to attend.

Another revived club at the university is Warwick University Folk Society which was formed in 2001. They describe themselves as ‘an eclectic group’ and ‘aim to cater from beginners to enthusiasts, with involvement in both the music, song and dance aspects of the Folk scene’.

The students union, at the university, continues to be incredibly vibrant. They do not appear to have as many bands nowadays, although the likes of The Wombats and The Wild Beasts have appeared there in recent years, but they have continued the tradition of keeping abreast of the times by providing a wide range of club nights at the recently refurbished Students Union halls, also known as The Copper Rooms. 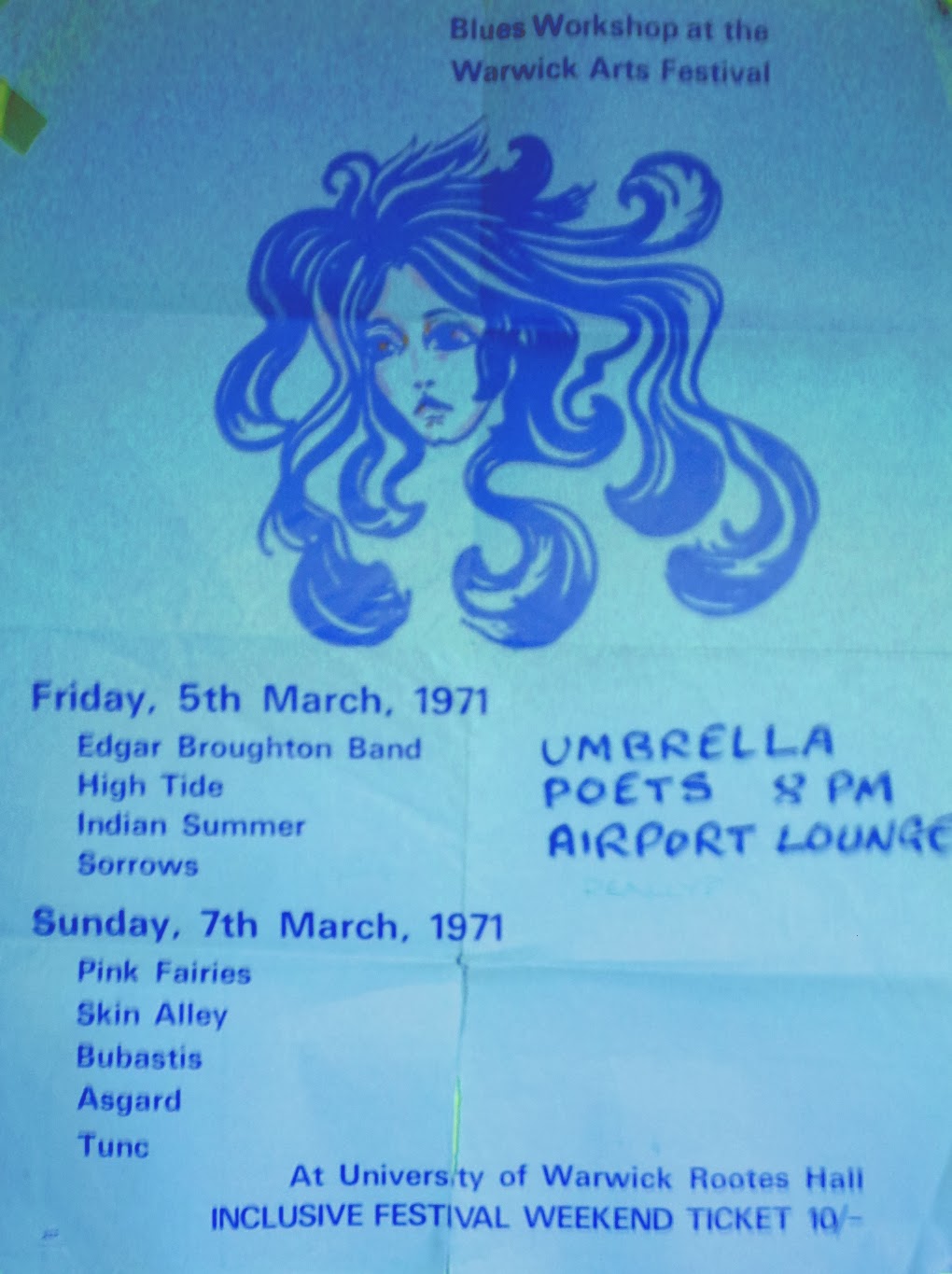 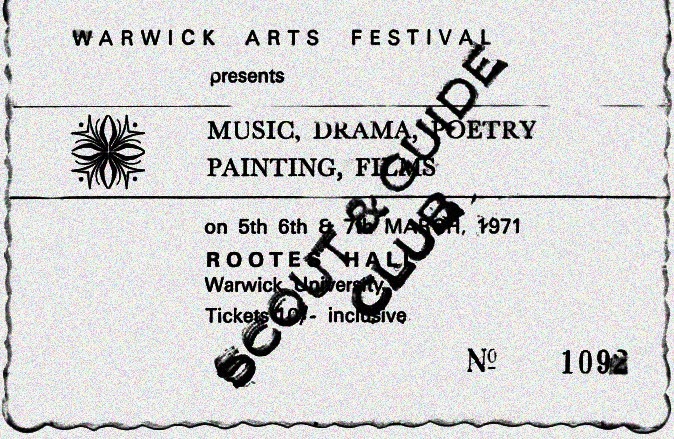 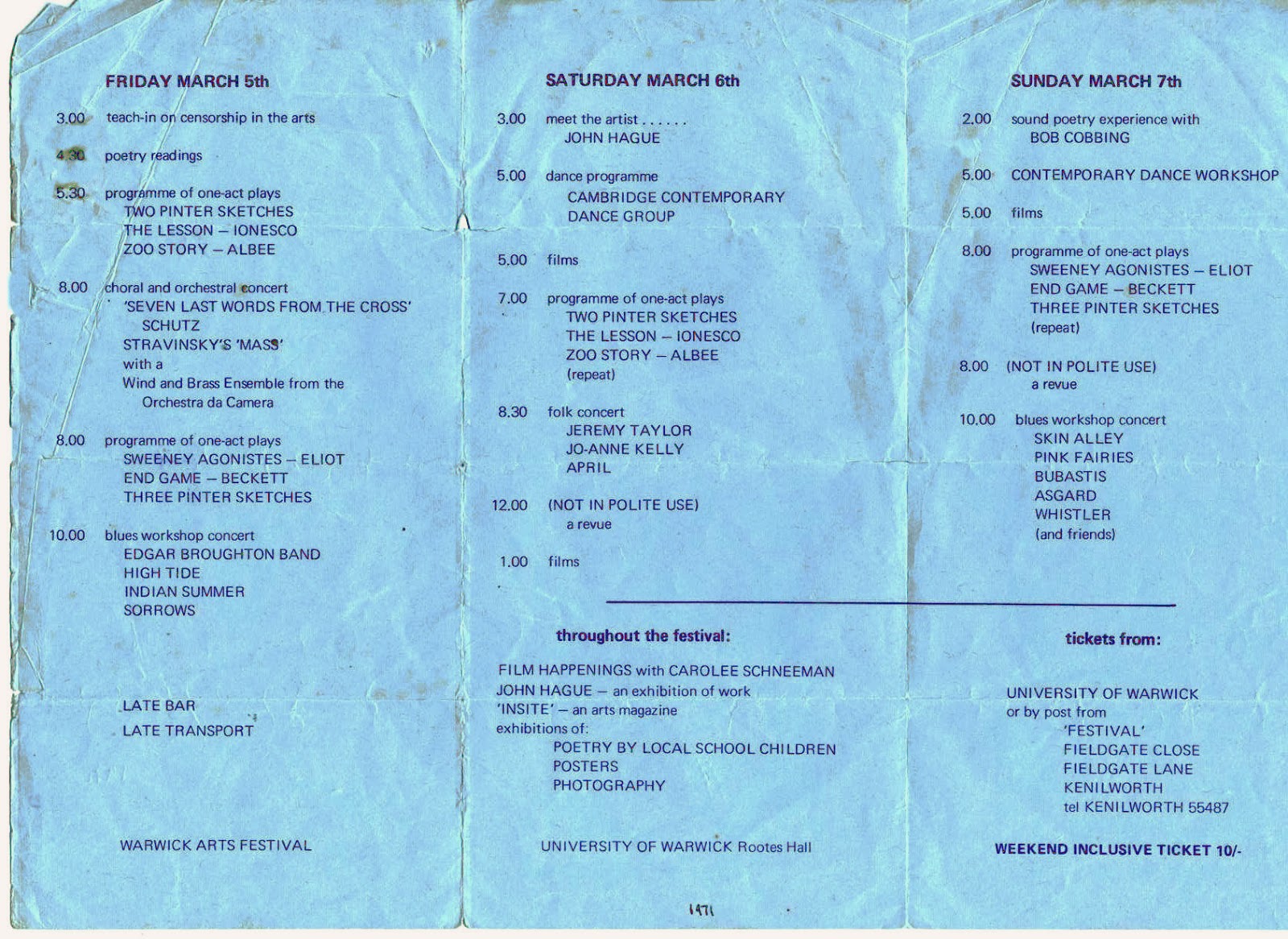 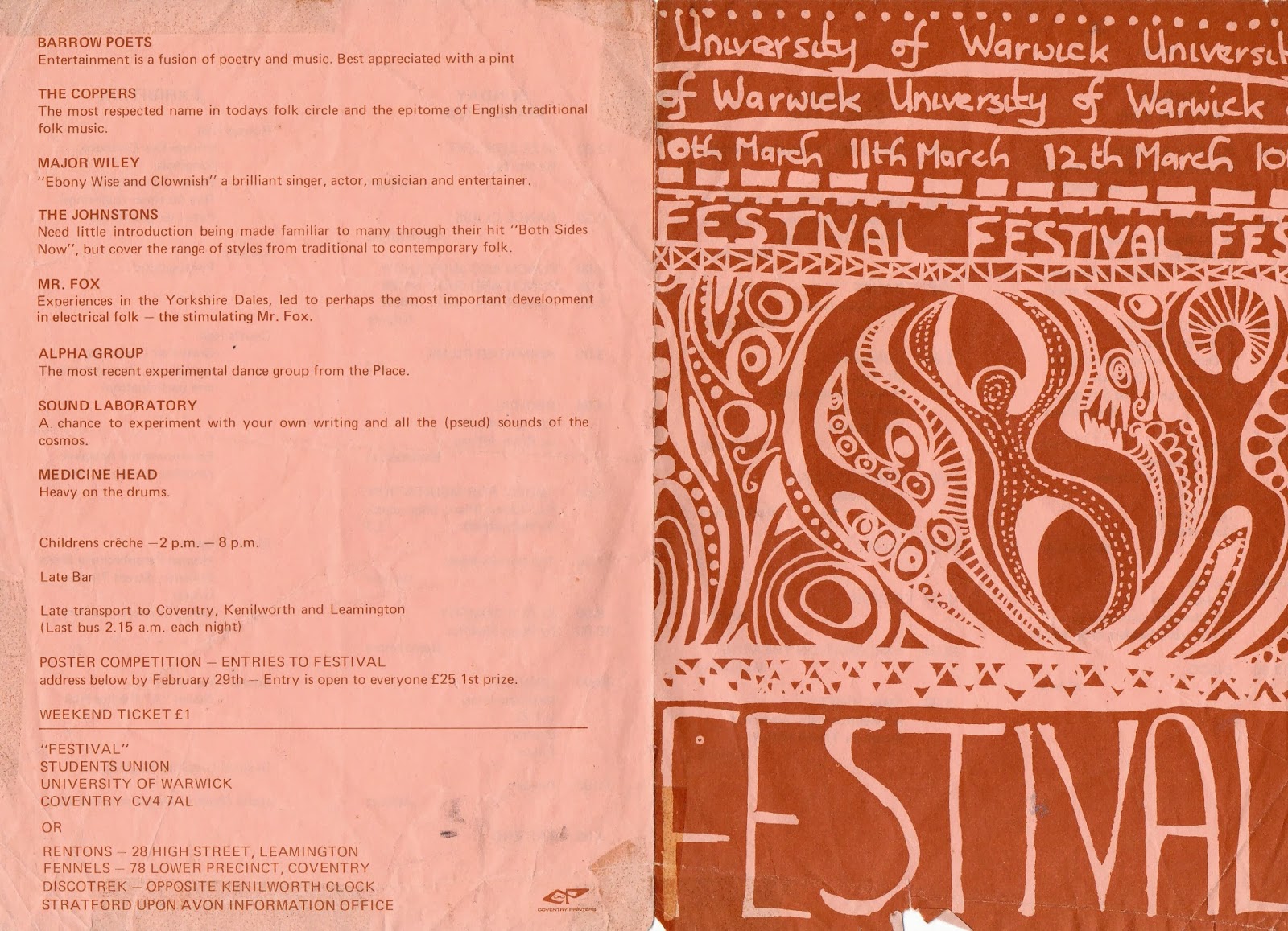 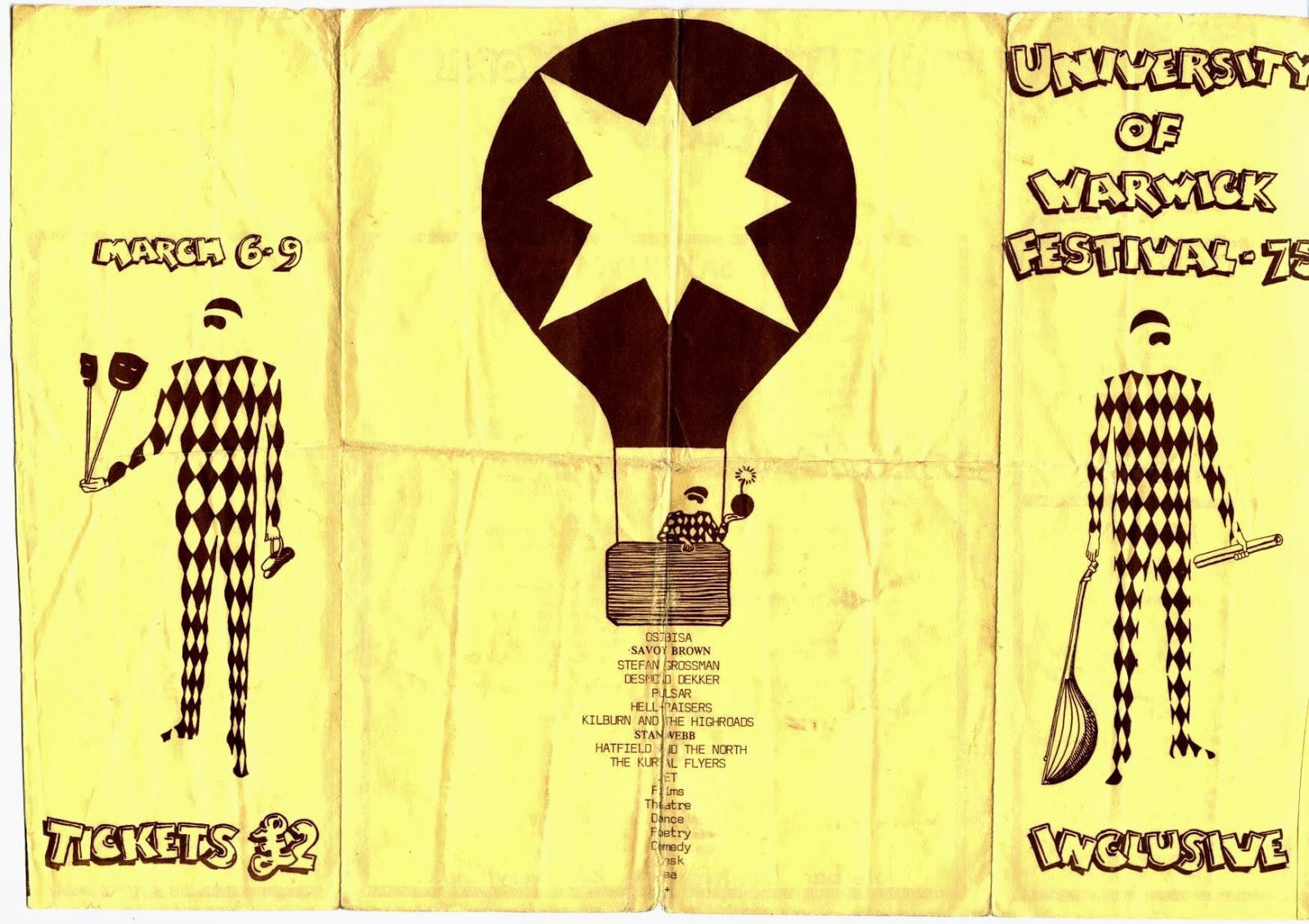 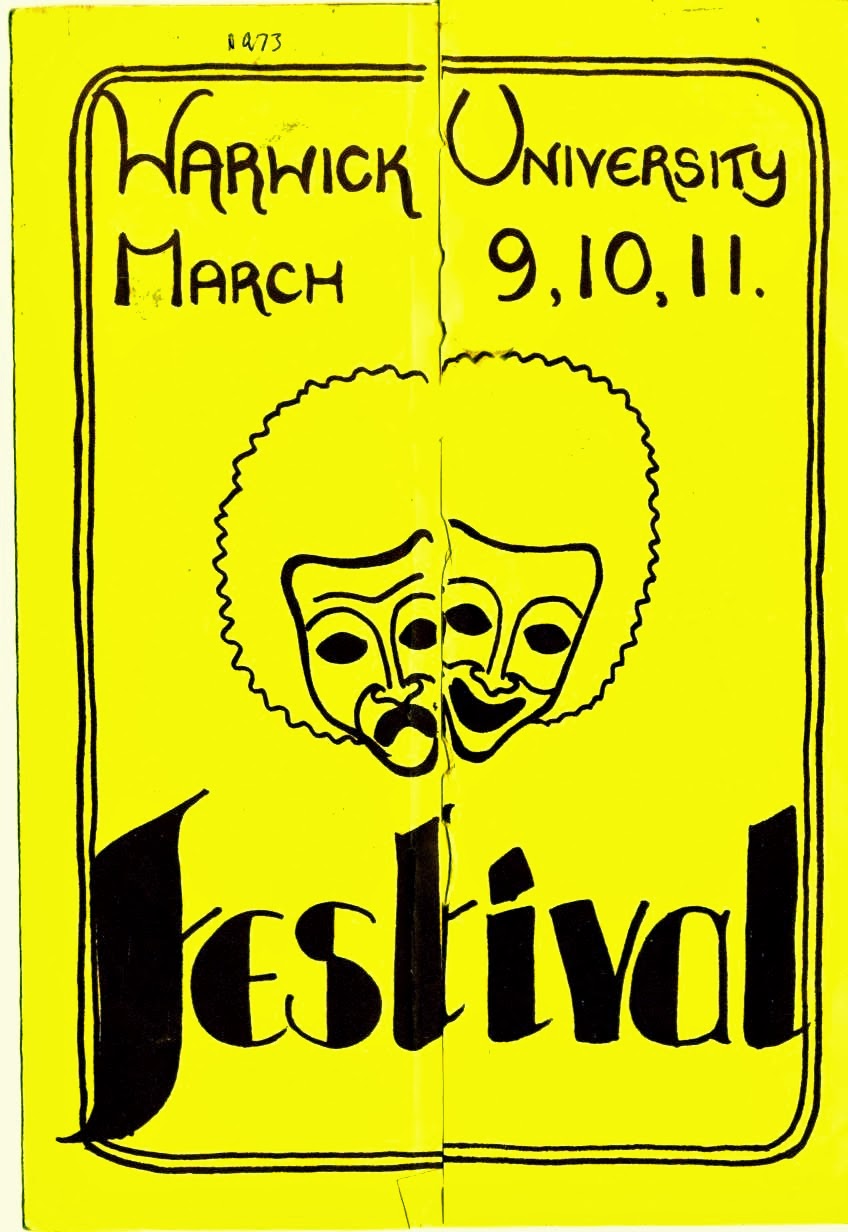