Pete Clemon's (in his latest Coventry Telegraph article) treats us to a special report on a new Celtic Christmas single by Coventry based Joe O'Donnell's Shkayla Noel Nouvelet - which has a long and interesting history as Pete explains and is offered as part of a free EP download but with the hope that people will pay for it as the money is to go a Children's charity to fund an innovative Music Therepy programme at the Rainbow Children's Hospice. The EP on Silvery Records can be downloaded here http://www.silveryrecords.com/#JoeODonnell

Over to Pete Clemons - 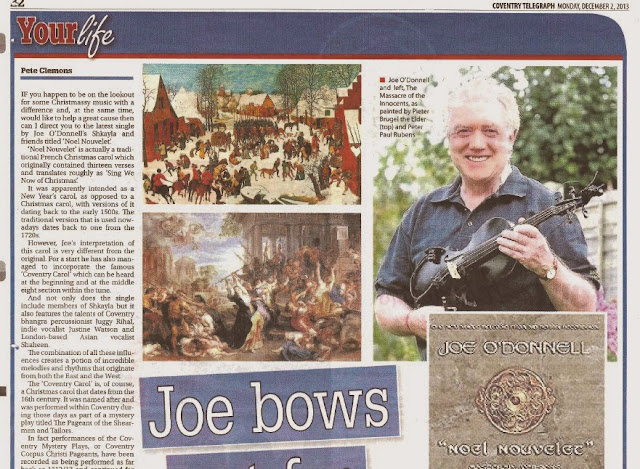 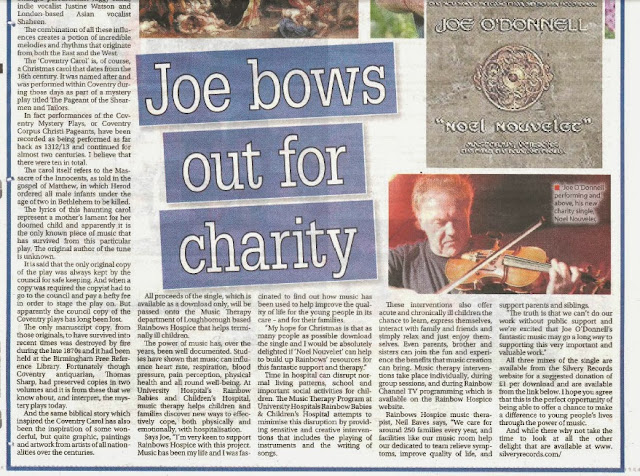 IF you happen to be on the lookout for some Christmassy music with a difference and, at the same time, would like to help a great cause then can I direct you to the latest single by Joe O'Donnell's Shkayla and friends titled 'Noel Nouvelet'.

'Noel Nouvelet' is actually a traditional French Christmas carol which originally contained thirteen verses and translates roughly as 'Sing We Now of Christmas'.

It was apparently intended as a New Year's carol, as opposed to a Christmas carol, with versions of it dating back to the early 1500s. The traditional version that is used nowadays dates back to one from the 1720s.

However, Joe's interpretation of this carol is very different from the original. For a start he has also managed to incorporate the famous 'Coventry Carol' which can be heard at the beginning and at the middle eight section within the tune.

And not only does the single include members of Shkayla but it also features the talents of Coventry bhangra percussionist Juggy Rihal, indie vocalist Justine Watson and London-based Asian vocalist Shaheen.

The combination of all these influences creates a potion of incredible melodies and rhythms that originate from both the East and the West.

The 'Coventry Carol' is, of course, a Christmas carol that dates from the 16th century. It was named after and was performed within Coventry during those days as part of a mystery play titled The Pageant of the Shearmen and Tailors.

In fact performances of the Coventry Mystery Plays, or Coventry Corpus Christi Pageants, have been recorded as being performed as far back as 1312/13 and continued for almost two centuries. I believe that there were ten in total.

The carol itself refers to the Massacre of the Innocents, as told in the gospel of Matthew, in which Herod ordered all male infants under the age of two in Bethlehem to be killed.

The lyrics of this haunting carol represent a mother's lament for her doomed child and apparently it is the only known piece of music that has survived from this particular play. The original author of the tune is unknown.

It is said that the only original copy of the play was always kept by the council for safe keeping. And when a copy was required the copyist had to go to the council and pay a hefty fee in order to stage the play on. But apparently the council copy of the Coventry plays has long been lost.

The only manuscript copy, from those originals, to have survived into recent times was destroyed by fire during the late 1870s and it had been held at the Birmingham Free Reference Library. Fortunately though Coventry antiquarian, Thomas Sharp, had preserved copies in two volumes and it is from these that we know about, and interpret, the mystery plays today.

And the same biblical story which inspired the Coventry Carol has also been the inspiration of some wonderful, but quite graphic, paintings and artwork from artists of all nationalities over the centuries.

All proceeds of the single, which is available as a download only, will be passed onto the Music Therapy department of Loughborough based Rainbows Hospice that helps terminally ill children.

The power of music has, over the years, been well documented. Studies have shown that music can influence heart rate, respiration, blood pressure, pain perception, physical health and all round well-being. At University Hospital's Rainbow Babies and Children's Hospital, music therapy helps children and families discover new ways to effectively cope, both physically and emotionally, with hospitalisation.

Says Joe, "I'm very keen to support Rainbows Hospice with this project. Music has been my life and I was fascinated to find out how music has been used to help improve the quality of life for the young people in its care - and for their families.

"My hope for Christmas is that as many people as possible download the single and I would be absolutely delighted if 'Noel Nouvelet' can help to build up Rainbows' resources for this fantastic support and therapy."

The Music Therapy Program at University Hospitals Rainbow Babies & Children's Hospital attempts to minimise this disruption by providing sensitive and creative interventions that includes the playing of instruments and the writing of songs.

These interventions also offer acute and chronically ill children the chance to learn, express themselves, interact with family and friends and simply relax and just enjoy themselves.

Even parents, brother and sisters can join the fun and experience the benefits that music creation can bring. Music therapy interventions take place individually, during group sessions, and during Rainbow Channel TV programming which is available on the Rainbow Hospice website.

Rainbows Hospice music therapist, Neil Eaves says, "We care for around 250 families every year, and facilities like our music room help our dedicated to team relieve symptoms, improve quality of life, and support parents and siblings.

"The truth is that we can't do our work without public support and we're excited that Joe O'Donnell's fantastic music may go a long way to supporting this very important and valuable work."

All three mixes of the single are available from the Silvery Records website for a suggested donation of PS1 per download and are available from the link below. I hope you agree that this is the perfect opportunity of being able to offer a chance to make a difference to young people's lives through the power of music.

And while there why not take the time to look at all the other delight that are available at www.silveryrecords.com/ 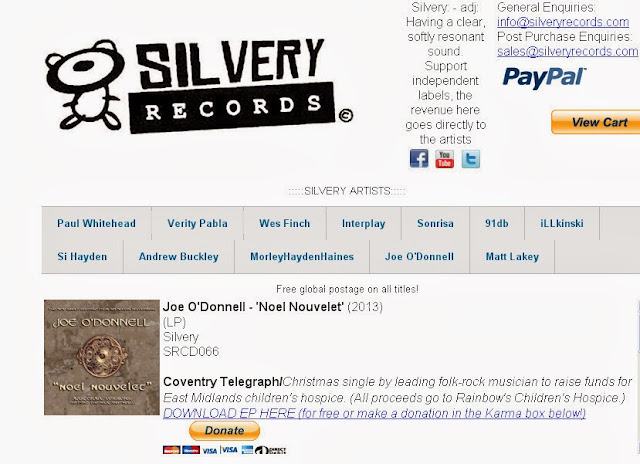