Pete Clemons unlocks the hidden history of  Coventry's Police Ballroom gigs and some of the big names that played there, in his latest Coventry Telegraph article - reproduced here on his behalf... 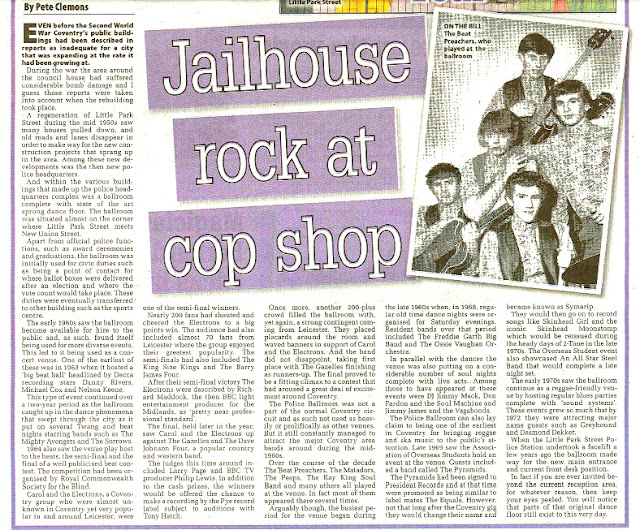 EVEN before the Second World War Coventry's public buildings had been described in reports as inadequate for a city that was expanding at the rate it had been growing at.

During the war the area around the council house had suffered considerable bomb damage and I guess those reports were taken into account when the rebuilding took place.

A regeneration of Little Park Street during the mid 1950s saw many houses pulled down, and old roads and lanes disappear in order to make way for the new construction projects that sprang up in the area. Among these new developments was the then new police headquarters. And within the various buildings that made up the police headquarters complex was a ballroom complete with state of the art sprung dance floor. The ballroom was situated almost on the corner where Little Park Street meets New Union Street.

Apart from official police functions, such as award ceremonies and graduations, the ballroom was initially used for civic duties such as being a point of contact for where ballot boxes were delivered after an election and where the vote count would take place. These duties were eventually transferred to other building such as the sports centre.

The early 1960s saw the ballroom become available for hire to the public and, as such, found itself being used for more diverse events. This led to it being used as a concert venue. One of the earliest of these was in 1963 when it hosted a 'big beat ball' headlined by Decca recording stars Danny Rivers, Michael Cox and Nelson Keene.

This type of event continued over a two-year period as the ballroom caught up in the dance phenomena that swept through the city as it put on several Twang and beat nights starring bands such as The Mighty Avengers and The Sorrows.

1964 also saw the venue play host to the heats, the semi-final and the final of a well publicised beat contest.

The competition had been organised by Royal Commonwealth Society for the Blind.

Carol and the Electrons, a Coventry group who were almost unknown in Coventry yet very popular in and around Leicester, were one of the semi-final winners.

Nearly 200 fans had shouted and cheered the Electrons to a big points win. The audience had also included almost 70 fans from Leicester where the group enjoyed their greatest popularity. The semi-finals had also included The King Size Kings and The Barry James Four.

After their semi-final victory The Electrons were described by Richard Maddock, the then BBC light entertainment producer for the Midlands, as 'pretty near professional standard'.

The final, held later in the year, saw Carol and the Electrons up against The Gazelles and The Dave Johnson Four, a popular country and western band.

The judges this time around included Larry Page and BBC TV producer Philip Lewis. In addition to the cash prizes, the winners would be offered the chance to make a recording by the Pye record label subject to auditions with Tony Hatch.

Once more, another 200-plus crowd filled the ballroom with, yet again, a strong contingent coming from Leicester. They placed placards around the room and waved banners in support of Carol and the Electrons. And the band did not disappoint, taking first place with The Gazelles finishing as runners-up. The final proved to be a fitting climax to a contest that had aroused a great deal of excitement around Coventry.

The Police Ballroom was not a part of the normal Coventry circuit and as such not used as heavily or prolifically as other venues. But it still constantly managed to attract the major Coventry area bands around during the mid-1960s.

Over the course of the decade The Beat Preachers, The Matadors, The Peeps, The Ray King Soul Band and many others all played at the venue. In fact most of them appeared there several times.

Arguably though, the busiest period for the venue began during the late 1960s when, in 1968, regular old time dance nights were organised for Saturday evenings. Resident bands over that period included The Freddie Garth Big Band and The Ossie Vaughan Orchestra.

In parallel with the dances the venue was also putting on a considerable number of soul nights complete with live acts. Among those to have appeared at these events were DJ Jimmy Mack, Don Fardon and the Soul Machine and Jimmy James and the Vagabonds.

The Police Ballroom can also lay claim to being one of the earliest in Coventry for bringing reggae and ska music to the public's attention.

Late 1969 saw the Association of Overseas Students hold an event at the venue. Guests included a band called The Pyramids. The Pyramids had been signed to President Records and at that time were promoted as being similar to label mates The Equals. However, not that long after the Coventry gig they would change their name and became known as Symarip.

They would then go on to record songs like Skinhead Girl and the iconic Skinhead Moonstomp which would be reissued during the heady days of 2-Tone in the late 1970s. The Overseas Student event also showcased An All Star Steel Band that would complete a late night set.

The early 1970s saw the ballroom continue as a reggae-friendly venue by hosting regular blues parties complete with 'sound systems'. These events grew so much that by 1972 they were attracting major name guests such as Greyhound and Desmond Dekker.

When the Little Park Street Police Station undertook a facelift a few years ago the ballroom made way for the new main entrance and current front desk position.

In fact if you are ever invited beyond the current reception area, for whatever reason, then keep your eyes peeled. You will notice that parts of that original dance floor still exist to this very day.

This is an advert from the Broadgate Gnome 1970 for a gig at the Police Ballroom.

HERE IS A VIRTUAL POLICE BALLROOM CONCERT REFLECTING THE CHANGING STYLES OF MUSIC FROM ROCK N ROLL TO PROGRESSIVE ROCK TO EARLY SOUL AND SKA TO COMUS...

Obviously Elvis never played the Police Ballroom in Coventry but give this track lent its title to Pete's article - here's a glimpse of  how such a concert might have gone there!

Here are some of the artists that played there -

I think Danny Rivers -  Joe Meek penned the B Side of this single (listen to it on youtube here https://www.youtube.com/watch?v=dRIdEusC9EQ) - meanwhile the A side - some more rock n roll -


Nelson Keene - Image of a Girl

Coventry hit group The Sorrows who were hot on the continent and chart toppers in Italy in the mid 60's - Don Fardon etal in concert in Offenbach https://sites.google.com/site/bandsfromcoventry/coventry-bands-a-to-z/coventry-bands-s/the-sorrows


Another mid 60's Coventry band - The Mighty Avengers - So much in Love -
https://sites.google.com/site/bandsfromcoventry/coventry-bands-a-to-z/coventry-bands-m/mighty-avengers

Legendary Coventry soul man Ray King played there with his King Size Kings - however this is the Ray King Soul Band live at the Playboy  Club in London https://sites.google.com/site/bandsfromcoventry/coventry-bands-a-to-z/coventry-bands-r/ray-king-soul-band-pact


And yet another big Coventry band from the mid 60's - The Matadors who signed with Joe Meek.

Broadgate Gnome advertised Wandering John 2 along with Comus and Demon Fuzz in 1970. Coventry band Wandering John had split up and Wandering John 2 was to be led again by John Gravenor only with new musicians including Neol Davies, later of the Selecter. However this is the original wandering John at their 40th reunion in 2010 - filmed by at the Sphinx club Coventry 2010 by Nomad of Lyme Regis TV.