(Readable text underneath the graphics) 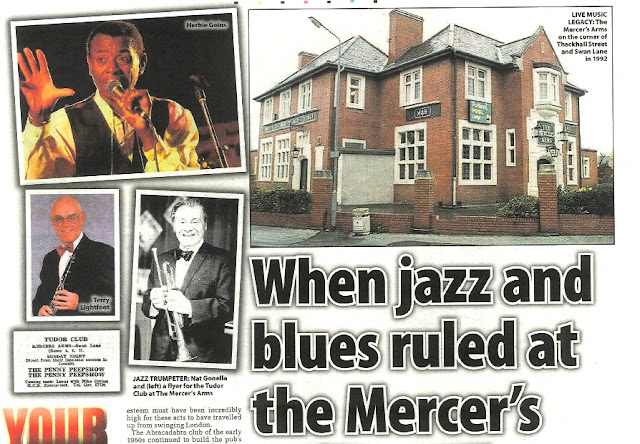 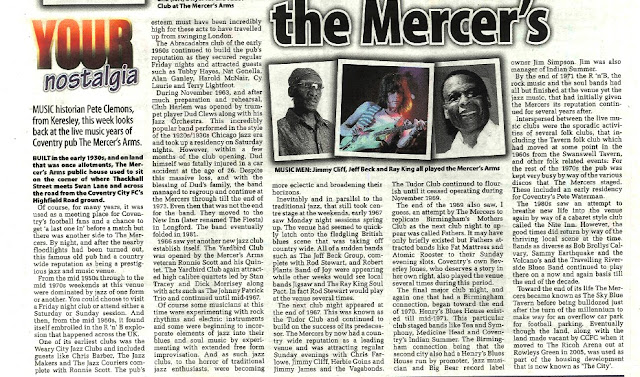 When jazz and blues ruled at the Mercer's; MUSIC historian Pete Clemons, from Keresley, this week looks back at the live music years of Coventry pub The Mercer's Arms.

BUILT in the early 1930s, and on land that was once allotments, The Mercer's Arms public house used to sit on the corner of where Thackhall Street meets Swan Lane and across the road from the Coventry City FC's Highfield Road ground.

Of course, for many years, it was used as a meeting place for Coventry's football fans and a chance to get 'a last one in' before a match but there was another side to The Mercers.

By night, and after the nearby floodlights had been turned out, this famous old pub had a country wide reputation as being a prestigious jazz and music venue.

From the mid 1950s through to the mid 1970s weekends at this venue were dominated by jazz of one form or another. You could choose to visit a Friday night club or attend either a Saturday or Sunday session. And then, from the mid 1960s, it found itself embroiled in the R 'n' B explosion that happened across the UK. One of its earliest clubs was the Weary City Jazz Clubs and included guests like Chris Barber, The Jazz Makers and The Jazz Couriers complete with Ronnie Scott. The pub's esteem must have been incredibly high for these acts to have travelled up from swinging London.

During November 1963, and after much preparation and rehearsal, Club Harlem was opened by trumpet player Dud Clews along with his Jazz Orchestra. This incredibly popular band performed in the style of the 1920s/1930s Chicago jazz era and took up a residency on Saturday nights. However, within a few months of the club opening, Dud himself was fatally injured in a car accident at the age of 26. Despite this massive loss, and with the blessing of Dud's family, the band managed to regroup and continue at the Mercers through till the end of 1973. Even then that was not the end for the band. They moved to the New Inn (later renamed The Fiesta) in Longford. The band eventually folded in 1981.

1966 saw yet another new jazz club establish itself. The Yardbird Club was opened by the Mercer's Arms veteran Ronnie Scott and his Quintet.

The Yardbird Club again attracted high calibre quartets led by Stan Tracey and Dick Morrisey along with acts such as The Johnny Patrick Trio and continued until mid-1967.

Of course some musicians at this time were experimenting with rock rhythms and electric instruments and some were beginning to incorporate elements of jazz into their blues and soul music by experimenting with extended free form improvisation. And as such jazz clubs, to the horror of traditional jazz enthusiasts, were becoming more eclectic and broadening their horizons.

Inevitably and in parallel to the traditional jazz, that still took centre stage at the weekends, early 1967 saw Monday night sessions spring up. The venue had seemed to quickly latch onto the fledgling British blues scene that was taking off country wide. All of a sudden bands such as The Jeff Beck Group, complete with Rod Stewart, and Robert Plants Band of Joy were appearing while other weeks would see local bands Jigsaw and The Ray King Soul Pact. In fact Rod Stewart would play at the venue several times.

The next club night appeared at the end of 1967. This was known as the Tudor Club and continued to build on the success of its predecessor.

The Mercers by now had a country wide reputation as a leading venue and was attracting regular Sunday evenings with Chris Farlowe, Jimmy Cliff, Herbie Goins and Jimmy James and the Vagabonds.

The Tudor Club continued to flourish until it ceased operating during November 1969.

The end of the 1969 also saw, I guess, an attempt by The Mercers to replicate Birmingham's Mothers Club as the next club night to appear was called Fathers. It may have only briefly existed but Fathers attracted bands like Fat Mattress and Atomic Rooster to their Sunday evening slots. Coventry's own Beverley Jones, who deserves a story in her own right, also played the venue several times during this period.

The final major club night, and again one that had a Birmingham connection, began toward the end of 1970. Henry's Blues House existed till mid-1971. This particular club staged bands like Tea and Symphony, Medicine Head and Coventry's Indian Summer. The Birmingham connection being that the second city also had a Henry's Blues House run by promoter, jazz musician and Big Bear record label owner Jim Simpson. Jim was also manager of Indian Summer.

By the end of 1971 the R 'n'B, the rock music and the soul bands had all but finished at the venue yet the jazz music, that had initially given the Mercers its reputation continued for several years after.

Interspersed between the live music clubs were the sporadic activities of several folk clubs, that including the Tavern folk club which had moved at some point in the 1960s from the Swanswell Tavern, and other folk related events. For the rest of the 1970s the pub was kept very busy by way of the various discos that The Mercers staged. These included an early residency for Coventry's Pete Waterman.

The 1980s saw an attempt to breathe new life into the venue again by way of a cabaret style club called the Nite Inn. However, the good times did return by way of the thriving local scene at the time. Bands as diverse as Bob Brollys Calvary, Sammy Earthquake and the Volcano's and the Travelling Riverside Blues Band continued to play there on a now and again basis till the end of the decade.

Toward the end of its life The Mercers became known as The Sky Blue Tavern before being bulldozed just after the turn of the millennium to make way for an overflow car park for football parking. Eventually though the land, along with the land made vacant by CCFC when it moved to The Ricoh Arena out at Rowleys Green in 2005, was used as part of the housing development that is now known as 'The City'. 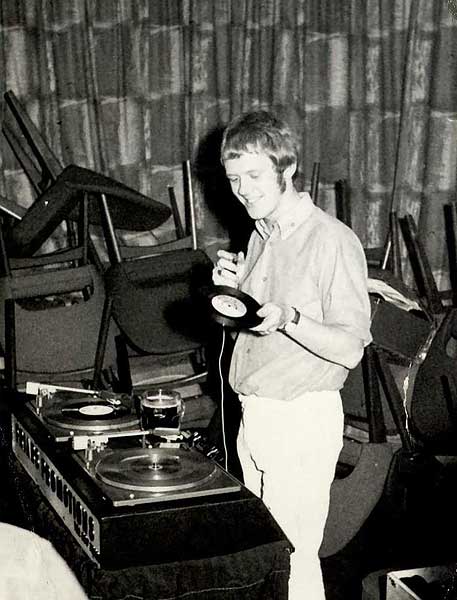 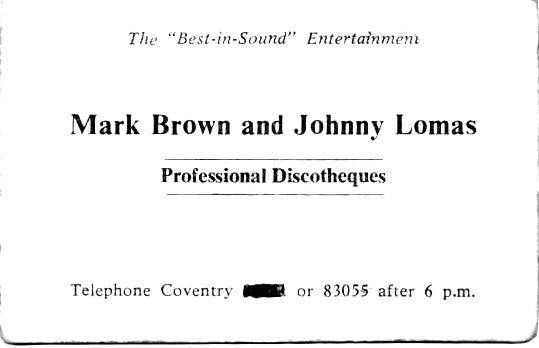 Mike Tyzack on Historic Covnetry http://www.historiccoventry.co.uk/memories/m-tyzack.php remembers - " In 1959 I started going to jazz clubs: There was The Weary City Jazz Club at The Mercer's Arms in Highfield Rd. They had visiting bands including Chris Barber and his band."

TREV TAKES THE STAGE WITH MEDICINE HEAD - A Story! 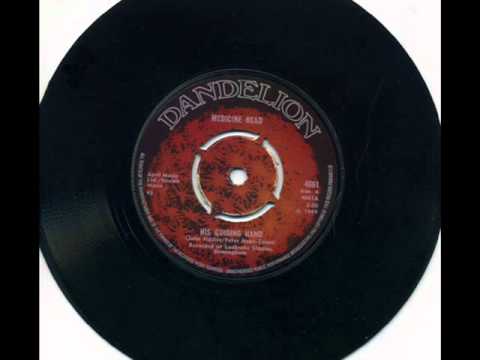 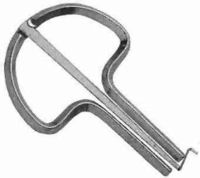 On Thursday 25th February 1971, Trev Teasdel (then organising the band nights at the Coventry Arts Umbrella and assisting Pete Waterman on the door at the Walsgrave Pub Progressive Music nights every Tuesday, went to the Mercers Arms with local drummer Steve Harrison and they met up with some female friends - the two Jans', Louise and Jackie. Trev had heard Medicine Head on John Peel and bought their first sing His Guiding Hand ( on the John Peel 'Dandelion label). Medicine head were a two-piece with songwriter John Fiddler on guitar and one man band drums and Peter Hope Evans on harmonica and Jews Harp. Peter however was off ill that night and a strange, unannounced guitar player took his place. As they had no Jew's Harp player John Fiddler asked if anyone in the audience played Jew's harp and would like to join them on stage for a couple of numbers. The girls volunteered Trev on stage. Although he had began writing his own songs and poetry, it was his first ever venture on stage! Quite daunting with such luminaries as Medicine Head but little did he know who the mystery guitarist was, that he shared a mic with and whom shared his bear with (Jew's Harp makes your mouth quite dry!). The band struck a twelve bar and Trev watched the guitarist fingers, noting his skill as he played along on the Jew's Harp but not realising just who he was! It should be noted that Trev was used to a small Jew's Harp that you could buy in the local music shop but the roadie had opened a box of assorted harps and gave a huge version that vibrated the hell out of his mouth! Coming off stage the roadie asked Trev if he knew who the mystery guitar player was. It turned out that it was only former Yardbirds lead singer Keith Relf, only his hair was a long longer these days. Keith had taken Medicine head under his wing and was now playing in a new band Renaissance!  Not bad for a first gig! Trev tried to book Medicine Head for the Umbrella Club but their fee was way out of the Umbrella's range! 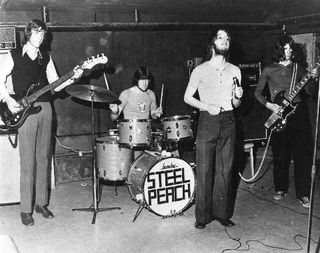 THE publicity surrounding Coventry City's planned new stadium reminds me of a venue much loved by jazz enthusiasts which became a casualty of an earlier redevelopment.

The Mercer's Arms, opposite the Sky Blues' Highfield Road football ground, was flattened to make way for a car park. In its final years the pub was known as the Sky Blue Tavern.

But in its heyday the Mercer's Arms was the venue where several local bands and many national names packed in the crowds during the decades when jazz was indeed a popular music.

Bands such as The Idaho attracted large Saturday night audiences during the late 1950s and the average age of the musicians was about 19.

At about the same time, a band composed mainly of art students, The Weary City Jazz Band, became so popular that its sessions were extended to both Tuesday and Thursday evenings.


Possibly the most significant development was the Dud Clews Jazz Orchestra, which played the big band music of Fletcher Henderson, Duke Ellington and McKinney's Cotton Pickers.

Saturday sessions were enormously popular from 1962 to 1974 and it is sad that Dud never lived to see how his original idea evolved into today's vintage big band, Harlem.

Harlem performed there with American legends George Kelly and Benny Waters as recently as 1982 and it is a source of regret that a building with such a history should end up being demolished.