Rocking at the Gaumont

Another article hits the press - Coventry Telegraph - from the pen of Pete Clemons. This time he regales us with the rock history at the Gaumont in the 1950's. If the likes of Bill Haley, Eddie Cochran and Cliff Richard ring a rock tune in your head - read on - 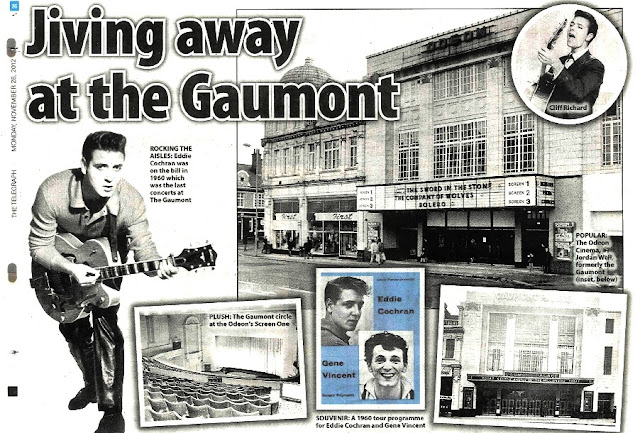 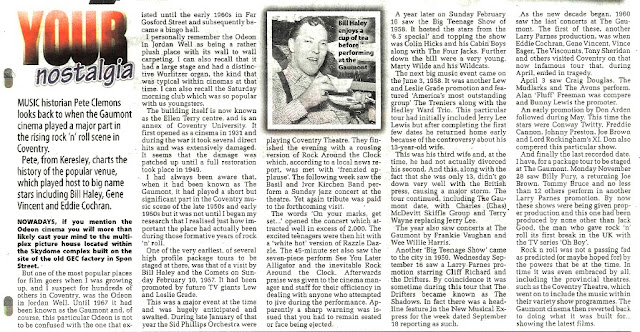 Jiving away at the Gaumont; MUSIC historian Pete Clemons looks back to when the Gaumont cinema played a major part in the rising rock 'n' roll scene in Coventry. Pete, from Keresley, charts the history of the popular venue, which played host to big name stars including Bill Haley, Gene Vincent and Eddie Cochran.

NOWADAYS, if you mention the Odeon cinema you will more than likely cast your mind to the multiplex picture house located within the Skydome complex built on the site of the old GEC factory in Spon Street.

But one of the most popular places for film goers when I was growing up, and I suspect for hundreds of others in Coventry, was the Odeon in Jordan Well. Until 1967 it had been known as the Gaumont and, of course, this particular Odeon is not to be confused with the one that existed until the early 1960s in Far Gosford Street and subsequently became a bingo hall.

I personally remember the Odeon in Jordan Well as being a rather plush place with its wall to wall carpeting. I can also recall that it had a large stage and had a distinctive Wurlitzer organ, the kind that was typical within cinemas at that time. I can also recall the Saturday morning club which was so popular with us youngsters.

The building itself is now known as the Ellen Terry centre, and is an annex of Coventry University. It first opened as a cinema in 1931 and during the war it took several direct hits and was extensively damaged. It seems that the damage was patched up until a full restoration took place in 1949.

I had always been aware that, when it had been known as The Gaumont, it had played a short but significant part in the Coventry music scene of the late 1950s and early 1960s but it was not until I began my research that I realised just how important the place had actually been during those formative years of rock 'n' roll.

One of the very earliest, of several high profile package tours to be staged at there, was that of a visit by Bill Haley and the Comets on Sunday February 10, 1957. It had been promoted by future TV giants Lew and Leslie Grade.

This was a major event at the time and was hugely anticipated and awaited. During late January of that year the Sid Phillips Orchestra were playing Coventry Theatre. They finished the evening with a rousing version of Rock Around the Clock which, according to a local news report, was met with 'frenzied applause'.

The following week saw the Basil and Ivor Kirchen Band perform a Sunday jazz concert at the theatre. Yet again tribute was paid to the forthcoming visit.

The words 'On your marks, get set...' opened the concert which attracted well in excess of 2,000. The excited teenagers were then hit with a 'white hot' version of Razzle Dazzle.

The 45-minute set also saw the seven-piece perform See You Later Alligator and the inevitable Rock Around the Clock. Afterwards praise was given to the cinema manager and staff for their efficiency in dealing with anyone who attempted to jive during the performance. Apparently a sharp warning was issued that you had to remain seated or face being ejected.

A year later on Sunday February 16 saw the Big Teenage Show of 1958. It hosted the stars from the '6.5 special' and topping the show was Colin Hicks and his Cabin Boys along with The Four Jacks. Further down the bill were a very young, Marty Wilde and his Wildcats.

The next big music event came on the June 3, 1958. It was another Lew and Leslie Grade promotion and featured 'America's most outstanding group' The Treniers along with the Hedley Ward Trio. This particular tour had initially included Jerry Lee Lewis but after completing the first few dates he returned home early because of the controversy about his 13-year-old wife.

This was his third wife and, at the time, he had not actually divorced his second. And this, along with the fact that she was only 13, didn't go down very well with the British press, causing a major storm. The tour continued, including The Gaumont date, with Charles (Chas) McDevitt Skiffle Group and Terry Wayne replacing Jerry Lee.

The year also saw concerts at The Gaumont by Frankie Vaughan and Wee Willie Harris.

Another 'Big Teenage Show' came to the city in 1959. Wednesday September 16 saw a Larry Parnes promotion starring Cliff Richard and the Drifters. By coincidence it was sometime during this tour that The Drifters became known as The Shadows. In fact there was a headline feature in the New Musical Express for the week dated September 18 reporting as such.

As the new decade began, 1960 saw the last concerts at The Gaumont.

The first of these, another Larry Parnes production, was when Eddie Cochran, Gene Vincent, Vince Eager, The Viscounts, Tony Sheridan and others visited Coventry on that now infamous tour that, during April, ended in tragedy.

April 3 saw Craig Douglas, The Mudlarks and The Avons perform. Alan 'Fluff' Freeman was compere and Bunny Lewis the promoter.

And finally the last recorded date, I have, for a package tour to be staged at The Gaumont. Monday November 28 saw Billy Fury, a returning Joe Brown, Tommy Bruce and no less than 12 others perform in another Larry Parnes promotion. By now these shows were being given proper production and this one had been produced by none other than Jack Good, the man who gave rock 'n' roll its first break in the UK with the TV series 'Oh Boy'.

Rock n roll was not a passing fad as predicted (or maybe hoped for) by the powers that be at the time. In time it was even embraced by all, including the provincial theatres, such as the Coventry Theatre, which went on to include the music within their variety show programmes. The Gaumont cinema then reverted back to doing what it was built for... showing the latest films.