King - The Rise and Fall of this Coventry Band

Pete Clemons now has his articles published automatically on line as well as in the physical version of Coventry Telegraph. Pete still wants the collection of his articles kept together but we can now do it differently - the text will digital with a graphic of the physical page but with the usual addition of supportive material from the Hobo websites.

With 1980s music being back in vogue recently it is worth remembering Coventry band King who were active between 1982 and 1986.

During their time together King certainly hit the heights as, at their peak, the band had a succession of hit singles and recorded two highly rated albums for CBS Records. However, it was how the band developed as a unit that I always found fascinating. Despite their eventual success it was not the smoothest of journeys.

The early 1980s were heady days for the Coventry music scene. There was an incredible amount of talent in
the city and an abundance of bands sprang up during this period. One of them, The Reluctant Stereotypes, appeared on iconic TV programme The Old Grey Whistle Test, and had caught the eye of fashion designer Perry Haines.

Perry was also a stylist and magazine editor. In the past he had worked on videos with bands such as Duran Duran, Spandau Ballet and Visage. And now he wanted to add band management to his portfolio. Perry had been impressed by The Reluctant Stereotypes and in particular their flamboyant vocalist  Paul King . Sometime later Perry contacted Paul and invited him down to London for some modelling work. Perry also expressed a desire to manage Paul’s band. But by then The Stereotypes had disbanded. So Paul set about building a new group.

This led to the creation of Raw Screens who consisted of Paul on vocals along with fellow Stereotypes, Tony Wall on bass and drummer Colin Heanes. Completing the group were guitarist Jim Lantsbery, Lynn Thompson on trumpet and Mick Roberts on keyboards.

By early 1982  Raw Screens had taken over a floor of The General Wolfe pub on the Foleshill Road. The support of landlord, Ken Brown, toward local musicians was incredible. By the summer of 1982 Raw Screens had lost Lynn Thompson and changed their name to King. (Lynn Thompson is, nowadays, a member of the rather excellent Stone Foundation).

1983 began extremely well for King and they had an excellent week during January when they had a track
played on Peter Powell’s Radio 1 show each evening for a week. They were also featured on BBC2’s Oxford Road Show on January 21 and the following night played a gig at the General Wolfe.

But there was disquiet in the camp and during Feb 1983 the band lost drummer Colin Heanes. In Colin’s own words he was ‘sacked for many reasons but mainly because he spoke his mind’. Colin was replaced by John Hewitt who had previously been with another local band Team 23.


1983 was a very busy year for King as they began the job of establishing themselves. They were given saw support slots for tours headlined by Wah!, Everything But The Girl and Jo Boxers. And towards the end of 1983 the band secured a recording deal with CBS records.

King quickly attracted a large following that included a number of skinheads. This was bound to happen, I guess, because of the way the band dressed in their Dr Martens boots which would go on to become their trademark attire. However vocalist Paul King was quick to play down the issue by emphasising the fact that the boots were not a symbol of aggression. The band was trying to turn all that on its head by painting the boots different colours and turning them into an enjoyment thing.

Part of a promotional pack put together by Perry Haines proclaimed ‘whereas Coventry was two tone, King now paint the town multi tone, embracing all the colours of the rainbow’. To distance the band from what had been King was being promoted as multi tone as opposed to a 2-Tone band.

March 1984 found King and Richard Burgess, of electronic band Landscape, in various studios. Over a three day period the group recorded ‘Love and Pride’ along with two B-side tracks but the recording session didn’t run smoothly. It seems that there were drumming issues.

The long awaited debut single was released during April 1984. King was really pleased with ‘ Love and Pride ’ with Paul King saying at the time ‘it is the best we could have done. It has a lot of potential but whether it is going to be a hit depends on whether the people at Radio 1 play it’.

The following month, May 1984, King announced the departure of drummer John Hewitt due to musical differences. However, John himself disclosed a deeper reason for his departure and revealed a series of what he felt were snubs. Even though he played drums on Love and Pride John had his picture erased from the single’s picture sleeve.

John also claimed that the rest of the band were allowed to buy new leather jackets for the photo shoot while he had to make do with a pair of oversized dungarees. And that he was not allowed to join the video shoot to promote the single.

With the LP recorded Paul King defended the band and claimed that King were changing their style and that it was John who was not happy playing in that style and it was he who did not want to stay as a member of the band.

During the album’s recording it was reported that the band had used an American drummer called ‘X’ who
had agreed to play on the LP but did not want to join the band permanently. It is also reported that Richard Burgess also played drums on the album.

King then enlisted the services of  former drummer with The Members, Adrian Lillywhite, who joined the band in order to fulfil a tour that had been set up to promote the album. Over the next two years Adrian would tour and record with King but would never feature as a member of the band in any promotional photo or videos.

The band’s second single ‘Soul on my Boots’ was released during the summer of 1984 and was heralded in by way of a new design of Doc Marten boot. The band were delighted to each receive a pair of the 20-hole boots which made their debut at a gig at the Dominion Theatre in London.

On September 10 1984 King provided the pre-match entertainment at a testimonial for Coventry City’s then skipper and stalwart Brian Roberts. The band played a 45-minute set precariously perched on the back of a lorry parked in the centre circle at Highfield Road. The set included a reworking of the Match of the Day theme tune.

During October 1984 King played a gig at the Lanchester Polytechnic. By now the band were getting a youthful  following. Paul King said at the time ‘so many young teenagers want to go and see bands but they are stopped from getting into the venues by the licensing laws’. So the band duly obliged by putting on a 3pm matinee and fixed the entrance fee to just 50p.

Those early singles had not had an impact on the charts. It was only after King made an appearance on the iconic TV programme ‘The Tube’ and toured with Culture Club toward the end of 1984 that the wider public begin to take notice of them. This resulted in a demand to have those singles rereleased.

January 1985 finally saw King take off and break onto the charts. A headline tour that included a gig at Coventry Theatre followed. The year continued with an appearance at Glastonbury, a successful tour of the America, the release of their second album ‘Bitter Sweet’, and ended with an infamous gig at the Glasgow Barrowland’s on New Year’s Eve which was filmed for an Old Grey Whistle Test special.

All had not been well though and cracks in the band had begun to show during 1985. King toured Japan during 1986 and there was even talk of a third album. But despite the band’s now worldwide’ popularity, a Paul King solo album was preferred by the record label. This effectively finished the band.

After the split Paul King, famously, went to work for the media where he became one of the faces of the MTV boom. Now living in his native Ireland Paul is still involved with the media. A compilation CD that pulls together all of King’s music, that includes Paul’s solo work, was released. And even today their hits can be heard on the radio. Particularly those that favour 1980s dance music. 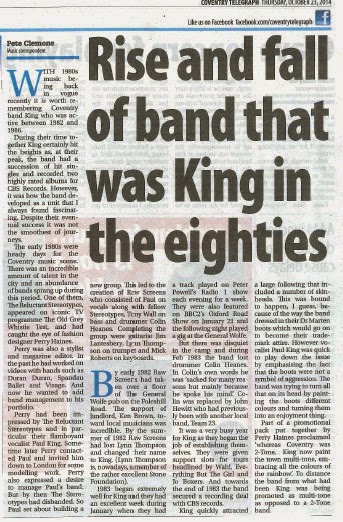 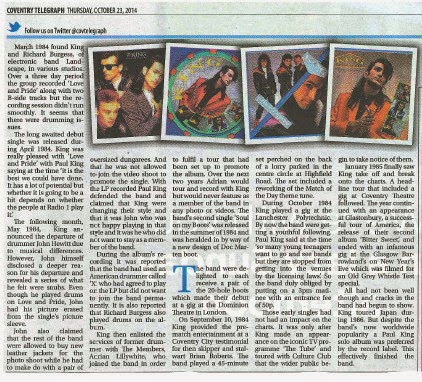 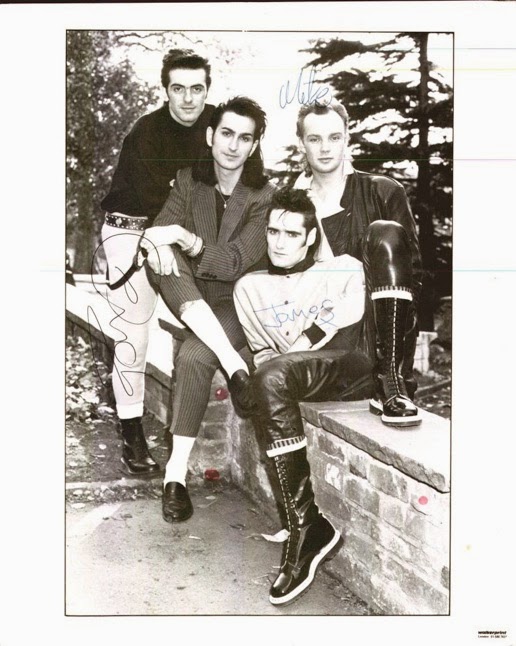 "Managed by Perry Haines, King had many hit singles, and were famous for their hideous mullet hairstyles, along with painted bovver boots. There was a lot of scoffing when this band started, but they worked bloody hard to get where they did, so well done to them. Once they hit, I remember not being able to walk around Coventry without seeing THAT haircut! They were working on a third album with Dan "instant replay" producing by split. Paul King made an Album "joy" produced by Hartman and appeared on the Ferry Aid single Let It Be, produced by our old friend Pete Waterman. He has been for many years a VJ on MTV, and very good at it he is too. Maybe all those years doing medieval banquets at Coombe Abbey paid off!"

The Raw Screens
From Pete Chambers
"Created from the remains of the ever-so-good Reluctant Stereotypes, The Raw Screens honed and perfected their act and then switched their name to King.

From a rather slow start the momentum increased and in January 1985 Coventry was back on the music map with the anthemic Love & Pride. It was a song designed to be instantly in your face, even beginning with its own chorus for maximum impact.

Although it would famously stay at number two in the charts throughout February, held back by Elaine Paige and Barbara Dickson of all people, it was a song that gave the overall scheme and intent of the band in just one record. All the meticulous planning was paying off and a support slot with Culture Club had done the band no harm at all. It wasn't all Paul King however, Jim Lantsbery also cut an interesting figure with his guitar hero dynamics and Mick Roberts with some nifty keyboard work, was the musical backbone of the band. Listen to King now and see just how underrated he actually was. Finally Tony Wall was always there, holding it all together on his trusty bass guitar. The whole King experience was to last a little over a year although in that time they would enter the charts again with four more powerpop songs (including Won’t You Hold My Hand Now and Alone Without You)." http://www.bbc.co.uk/coventry/content/articles/2005/08/05/pop_past_thirteen_king.shtml

Reluctant Stereotypes formed first out of 2 jazz / rock bands Analog and Trigon who played their first gigs at the Hobo Workshop, Holyhead Youth Centre september 1974. Offshoot bands were Bung and Ens and then came Reluctant Stereotypes mark 1 and 2 with Paul King. RS split up c 1981 - two bands formed - Pink Umbrellas with Paul Samson and Raw Screens with Paul King. Raw Screens became King - but with various changes to the drummer before and after success.

Roots of  King
Analog 1974 The first band with future members of Reluctant stereotypes in played at the Hobo Workshop, Holyhead Youth centre.
https://sites.google.com/site/bandsfromcoventry/coventry-bands-a-to-z/coventry-bands-a/analog