For the Coventry Telegraph, Pete Clemons tells the story of the 1974 Coventry precinct concert organised by the Hobo Workshop, an offshoot of Hobo Coventry Music and Arts Magazine, originally based at the Holyhead Youth Centre in Coventry c September 1974. 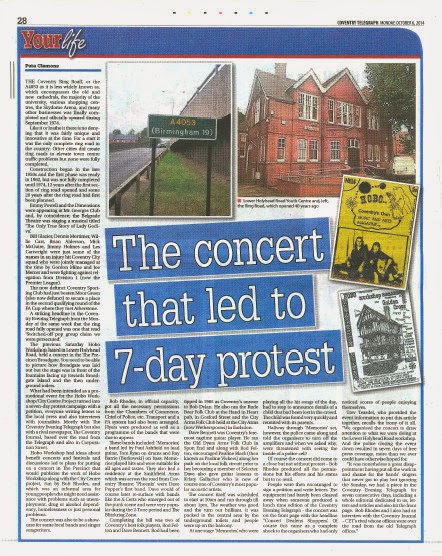 One of the aims of Hobo magazine had been to create a venue to help get new bands and artists started and for creative activities like Street theatre, alternative films, jam sessions and much. It was facilitated and supported by the City Centre Project - a youth project created by Coventry Voluntary Service Council to help young people with problems of homelessness, unemployment, alcohol or drug dependency etc. Bob Rhodes, the Detached Youth Worker needed to reach young people who maybe in need of help and Hobo magazine had identified a number of youth problems. Bob therefore worked with us and in doing so facilitated our wider aims to provide a venue and facilities for budding musicians in the city. In order to publicise the work and the gigs, we collectively organised a Saturday concert in the centre of Coventry with a number of bands and a couple of folk performers identified in the article. However the concert was closed down by the police and a 7 day protest in the press ensued - the cuttings are below and Pete Clemons tells the story. Below is a readable version, split into two parts so the small print can be read. 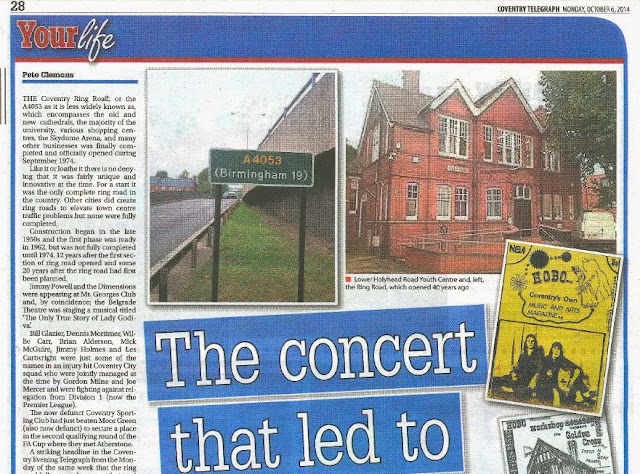 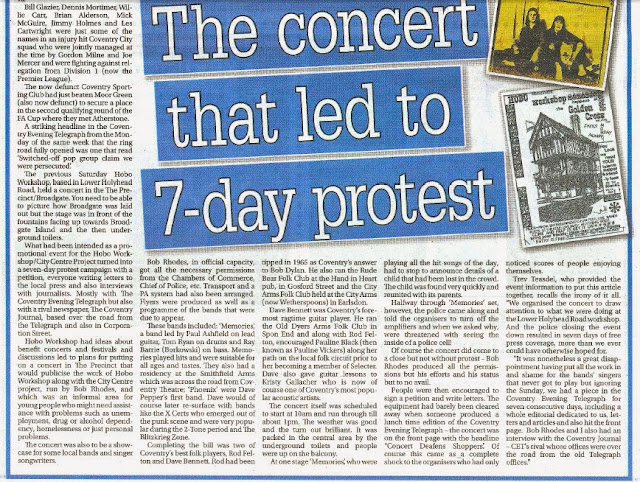 The Coventry Ring Road or the A4053 as its less widely known as, which encompasses the old and new Cathedrals, the majority of the university, various shopping centres, the Skydome arena, and many other businesses, was finally completed and officially opened during September 1974.

Like it or loathe it there is no denying that it was fairly unique and innovative at the time. For a start it was the only complete ring road in the country.Other cities did create ring roads to alleviate town center traffic problems but none of them were fully completed.

Jimmy Powell and the Dimensions were appearing at Mr Georges club and by coincidence the Belgrade Theatre was staging a musical titled "The Only True Story of Lady Godiva". Bill Glazier, Dennis Mortimer, Willie Carr, Mick McGuire, Jimmy Holmes and Les Cartwright were just some of the names in an injury hit at Coventry City Squad who were jointly managed at the time by Gordon Milne and Joe Mercer and were fighting against relegation from Division 1 (now the Premier League).

The now defunct Coventry sporting club had just beaten Moor Green (also now defunct) to secure a place in the second qualifying round of the FA Cup where they met Atherstone.

A striking headline in the Coventry Evening Telegraph from the Monday of the same week that the ring road fully opened, read "Switched Off Pop Group Claimed 'We Were Persecuted!".

The previous Saturday, The Hobo Workshop, based in the Holyhead Youth Centre, Lower Holyhead Road, held a concert in the precinct / Broadgate. You need to be able to picture how Broadgate was laid out but the stage was in front of the fountains facing up to Broadgate island and the then underground toilets.

What had been intended as a promotional event for the Hobo Workshop / City Centre Project turned into a 7-day protest campaign with a petition, everyone writing letters to the local press and also interviews with journalists. Mostly with the Coventry Evening Telegraph but also with a rival newspaper The Coventry Journal based over the road from the Evening Telegraph and also in Corporation Road.

Hobo Workshop had ideas about benefit concerts and festivals and discussions led to plans for putting on a concert in the Precinct that would publicise the work of the Hobo Workshop along with the City Centre Project run by Bob Rhodes and which was an informal area for young people who might need assistance with problems such as unemployment, drug or alcohol dependence, homelessness or just personal problems.

The concert was also to be a showcase for local bands and singer songwriters. Bob Rhodes, in his official capacity, got all the necessary permissions from the Chambers of Commerce, Chief of Police etc. transport and a PS System had also been arranged and flyers were produced as well as a programme of all the bands that were due to appear.

These bands included Memories, a band led by Paul Ashfield on lead guitar, Tom Ryan on drums, Ray Barrie (Borkowskie) on bass. Memories played hits and were suitable for all ages and tastes. They also had a residency at the Smithford Arms, which was across the road from the Coventry Theatre. Phoenix was a band led by Dave Pepper and his first band. Dave would of course resurface with the X Certs who emerged out of the Punk scene and were very popular during the Two Tone era and he was also in the Blitzkrieg Zone.

Completing the bill were two of Coventry's best folk players, Rod Felton and Dave Bennett. Rod had been tipped in 1965 as Coventry's answer to Bob Dylan.He also ran the Rude Bear Folk Club at the Hand in Heart pub in Gosford Street and the City Arms Folk Club (now Wetherspoons) in Earlsdon.

Dave Bennett was Coventry's foremost Ragtime guitar player. He ran the Old Dyers Arms Folk Club in Spon End and along with Rod Felton, encouraged Pauline Black, then known as Pauline Vickers, along her path on the local folk circuit,prior to her becoming a member of The Selecter. Dave also gave lessons to Kristy Gallacher who is now of course one of the most popular acoustic artists.

The concert itself was scheduled to start at 10 am and run through until 1pm. The weather was good and the turn was brilliant. It was packed in the central area by the underground toilets and people were up on the balcony.

At one stage, Memories, who were playing all the hit songs of the day, had to stop to announce details of a child that had been lost in the crowd. The child was found very quickly and reunited with its parents.

Halfway through 'Memories' set, however, the police came along and told the organisers to turn off the amplifiers and when asked why, were threatened with seeing the inside of a police cell. Of course, the concert did come to a close but not without protest. Bob Rhodes produced all the permissions but his efforts and his status were to no avail!

People were then encouraged to sign a petition or write letters.The equipment had barely been cleared away when someone produced a lunch time edition of the Coventry Evening Telegraph - the concert was on the front page with the headline Concert Deafens Shoppers. Of course this came as a complete surprise to the organisers who had only noticed scores of people enjoying themselves.

Trev Teasdel, Editor of Hobo Magazine and co-organiser of the concert and who provided the event information for this article, recalls the irony of it all! "We organised the concert to draw attention to the work we were doing at the Hobo Workshop, and the police closing the event down resulted in 7 days of free press coverage, much more than we could otherwise have hoped for!

It was nonetheless a great disappointment having put all the work in and a shame for the bands and singers that never got to play! But ignoring Sunday, we had a piece in the Coventry Evening Telegraph for 7 consecutive days, including a whole editorial dedicated to us. there were letters,articles and we hit the front page! Bob Rhodes and I were also interviewed by the Coventry Journal, CET's rival, whose offices were over the road from the old Telegraph Office." 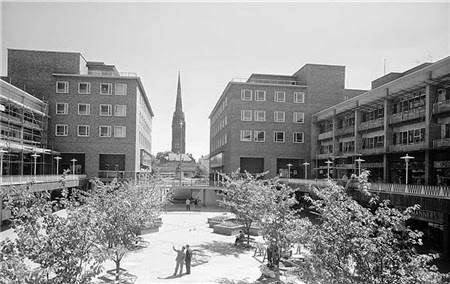 The Upper precinct in the 60's and 70's where the concert was held. The inner area and the balconies were packed with shoppers and their children watching the concert. The stage was by the fountains facing up towards the spire.

Front Page Coventry Evening Telegraph - This piece appeared Saturday Sept. 14th 1974 on the front page of the lunchtime edition  while we were packing up. The paper were quick off the mark to report that the concert had been closed down by the police.

This appeared in the Monday (16th Sept) edition of the Coventry Evening Telegraph. Youth Worker Bob Rhodes who had got the permissions for us in official capacity, went in to talk to the paper about the issue - this was the result. 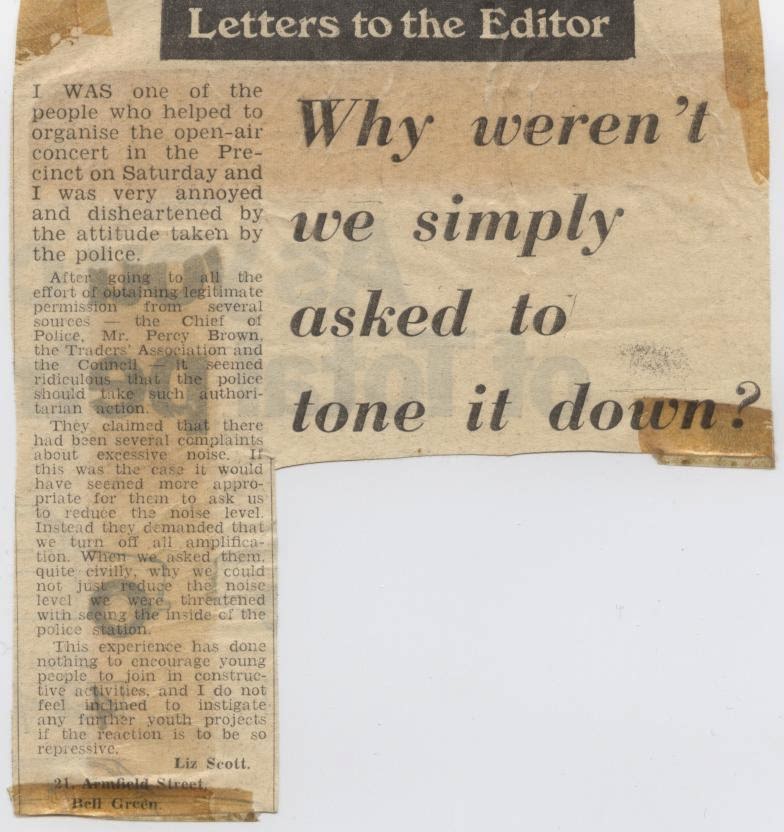 Liz Scott - Hobo Workshop Secretary got her letter to the editor in on Tuesday 17th September 1974.
Meanwhile many wrote in to the paper.

By Weds 18th September 74, such was the response that the Editor of the Coventry Evening Telegraph was moved to dedicate a whole editoria to the Hobo Workshop, taking a balanced view. 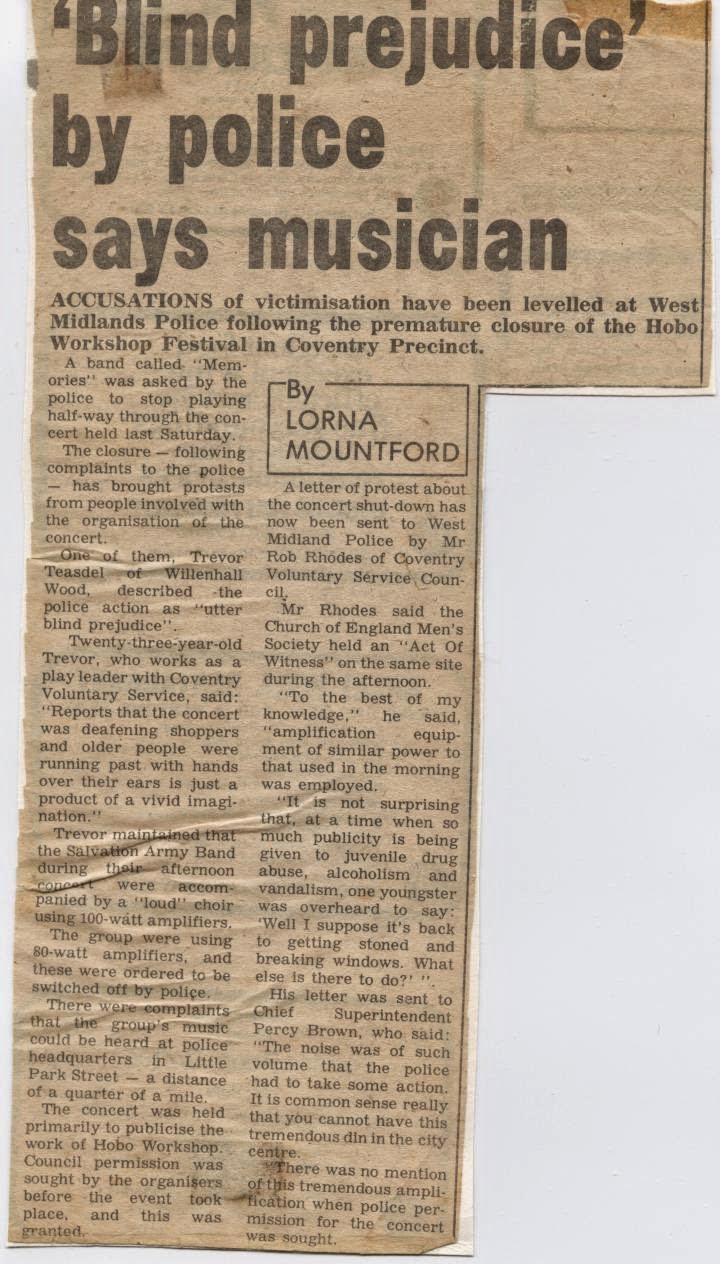 Thursday 19th September 74 was the turn of  the city's rival paper - The Coventry Journal, based opposite the Coventry Telegraph office. Bob Rhodes and Trev Teasdel were interviewed in their offices and this was the dramatic result!

On october 3rd. 74 the Coventry Evening Telegraph published a letter to the editor by Trev Teasdel, editor of of hobo magazine and Co-organiser of the Hobo Workshop. Trev had sent a few quite long letters. One was composed of TS Eliot Wasteland quotes  and one in particular was suitable for publication although the editor asked for permission to edit it - which was granted.

Here is the letter from the editor asking for permission to edit the letter. 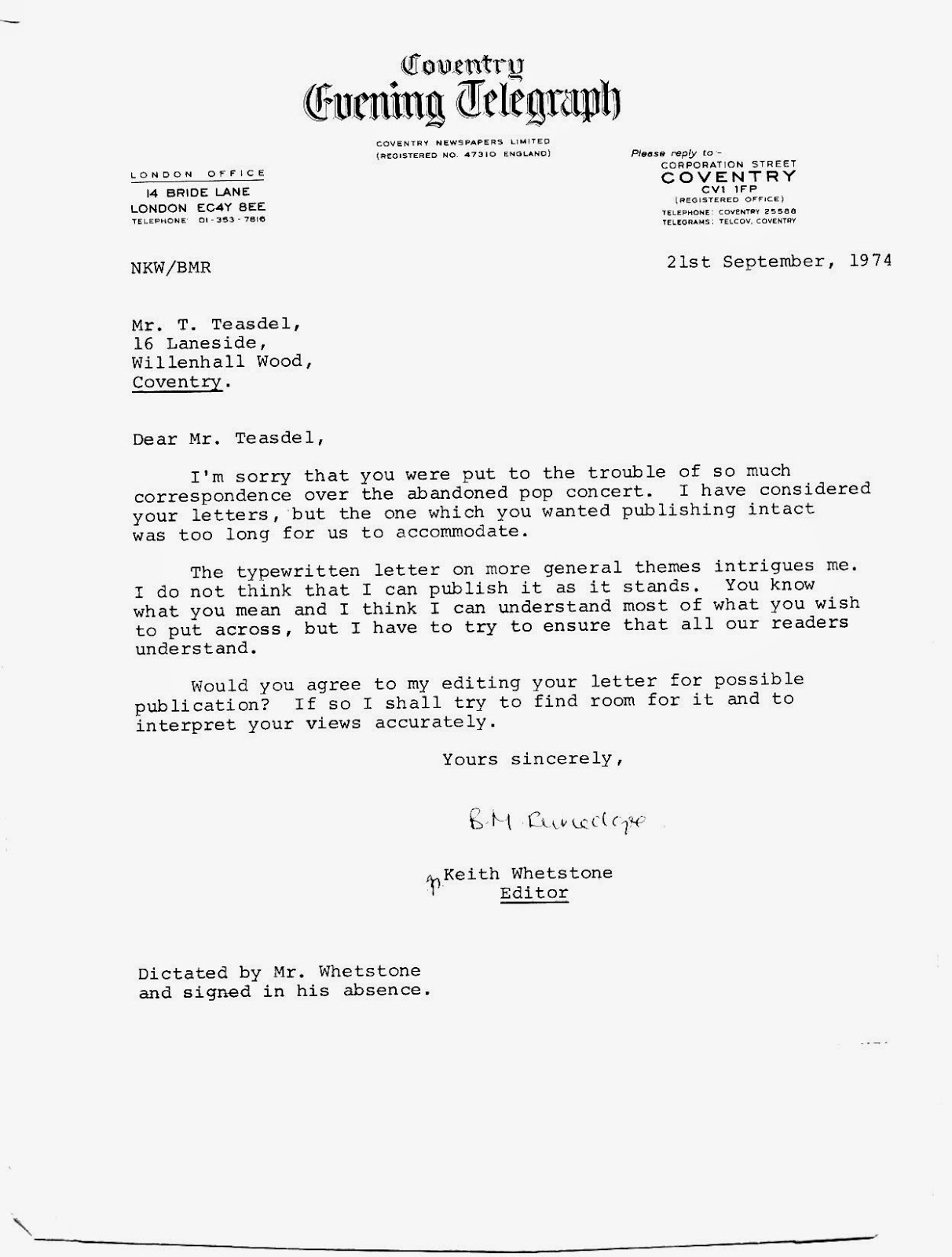 In the original letter I'd mentioned some our future ideas which included a Coventry Music Festival (long before the  Godiva festival was thought up), Trench Coat - a second magazine concentrating on more social issues than Hobo. Children's creative workshop with arts practitioners. The Coventry Voluntary service council at the time provided volunteers to work on playschemes during the summer.  We had also started a street theatre workshop and Alternative film night at the Holyhead. There were quite a few ideas we had some of which took off and some which didn;t see the light of day. 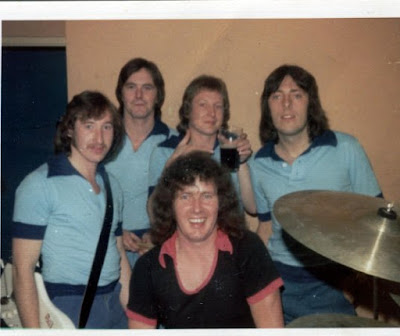 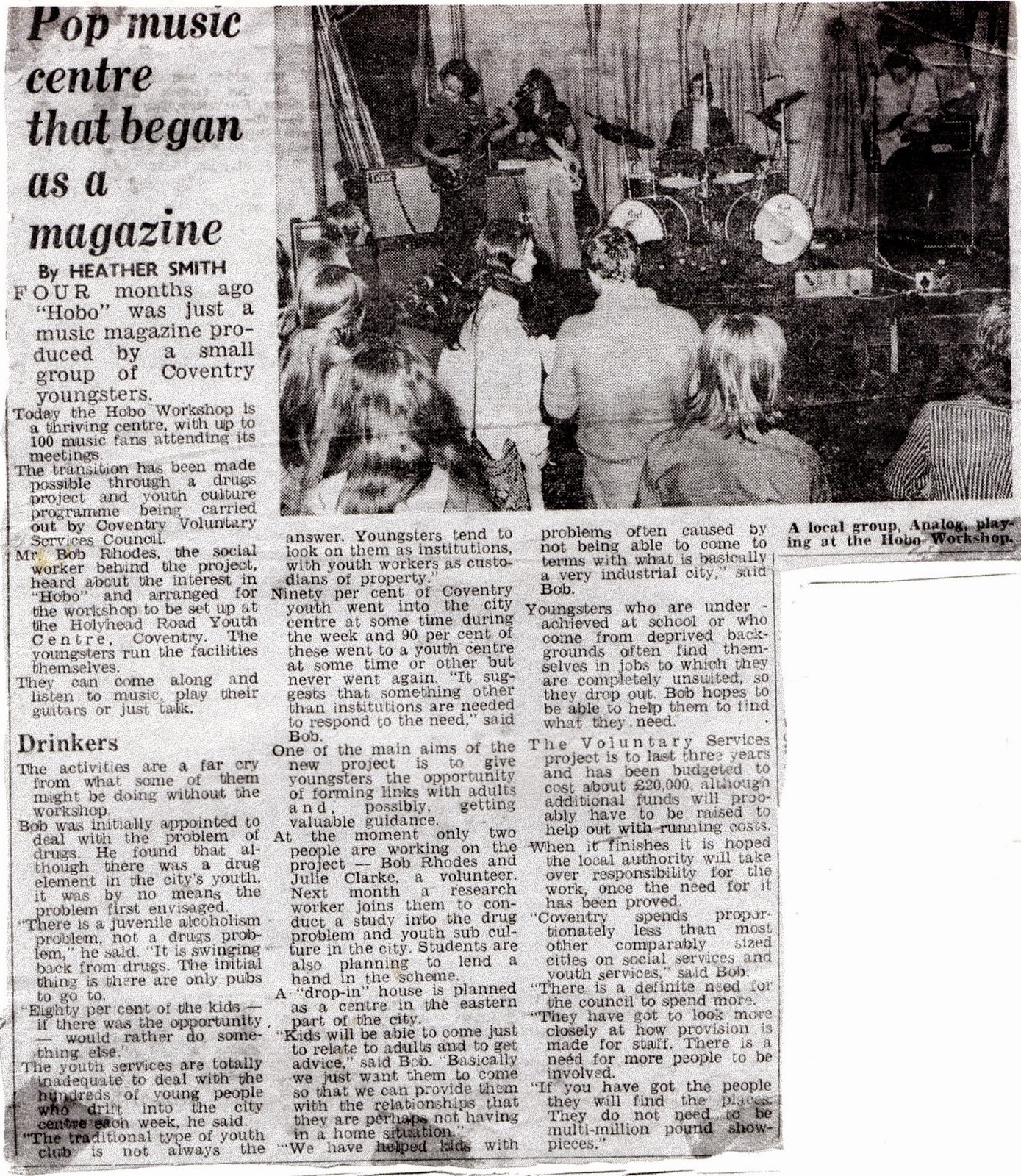 An earlier article in september 1974 on the Hobo Workshop, with Analog performing their first ever gig at the Holyhead Youth Centre. Analog had a number of members in the band who later formed the two tone band Reluctant Stereotypes - including Steve Edgson, Paul Brook, Mick Hartley. 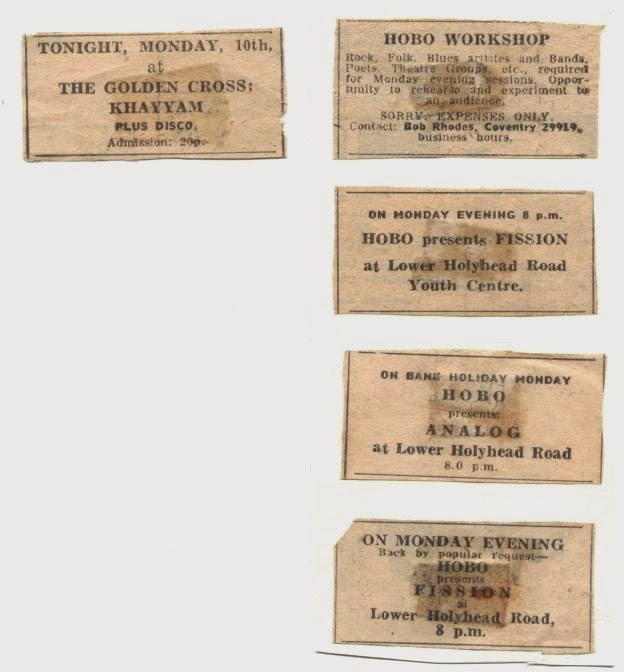 A few of the bands who played at the Hobo Workshop on a Monday night 1974. Fission was Johnny Adams's band - later in Squad - Terry Hall's first band. 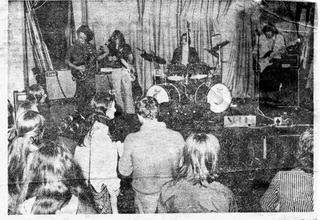 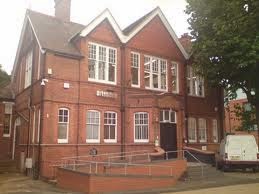 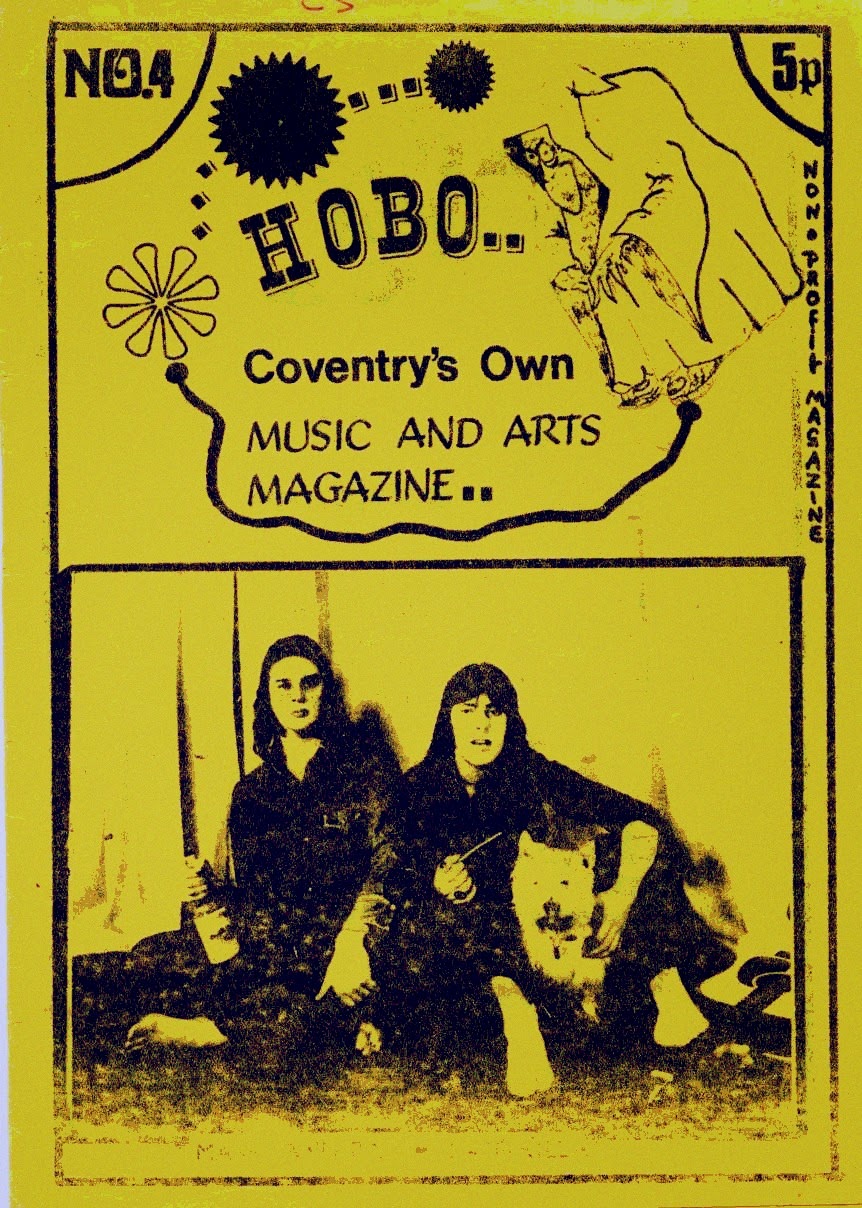 Cover on Hobo Magazine featuring Mark Rider (now of Skawaddy) and Ray Barrie who appeared in Memories who played in the Shutdown Concert. 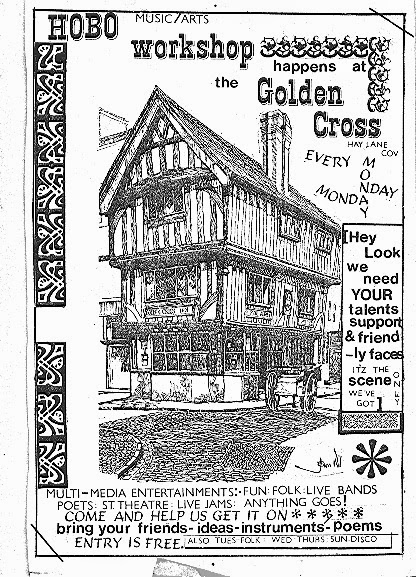 By November 1974, the Hobo Workshop had moved to upstairs at the Golden Cross and this is Trev's flyer for it. Horace Panter played for us in 1975 with a jazz rock band I knew as Rickie's band and later two Toners Neol Davies, Charley Anderson, Desmond Brown and John Bradbury came along to one of the sessions. 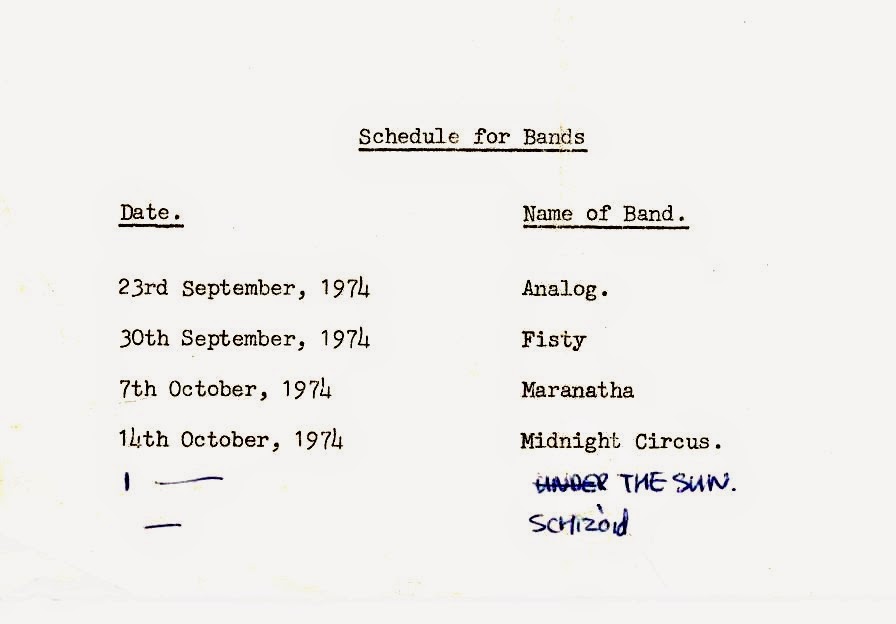 Midnight Circus was Neil O'Connor's band in 1974 - they later became the Flys who made the single Molotov Cocktail in 1979. Neil later played with his sister's band Hazel o'Connor's Megahype. 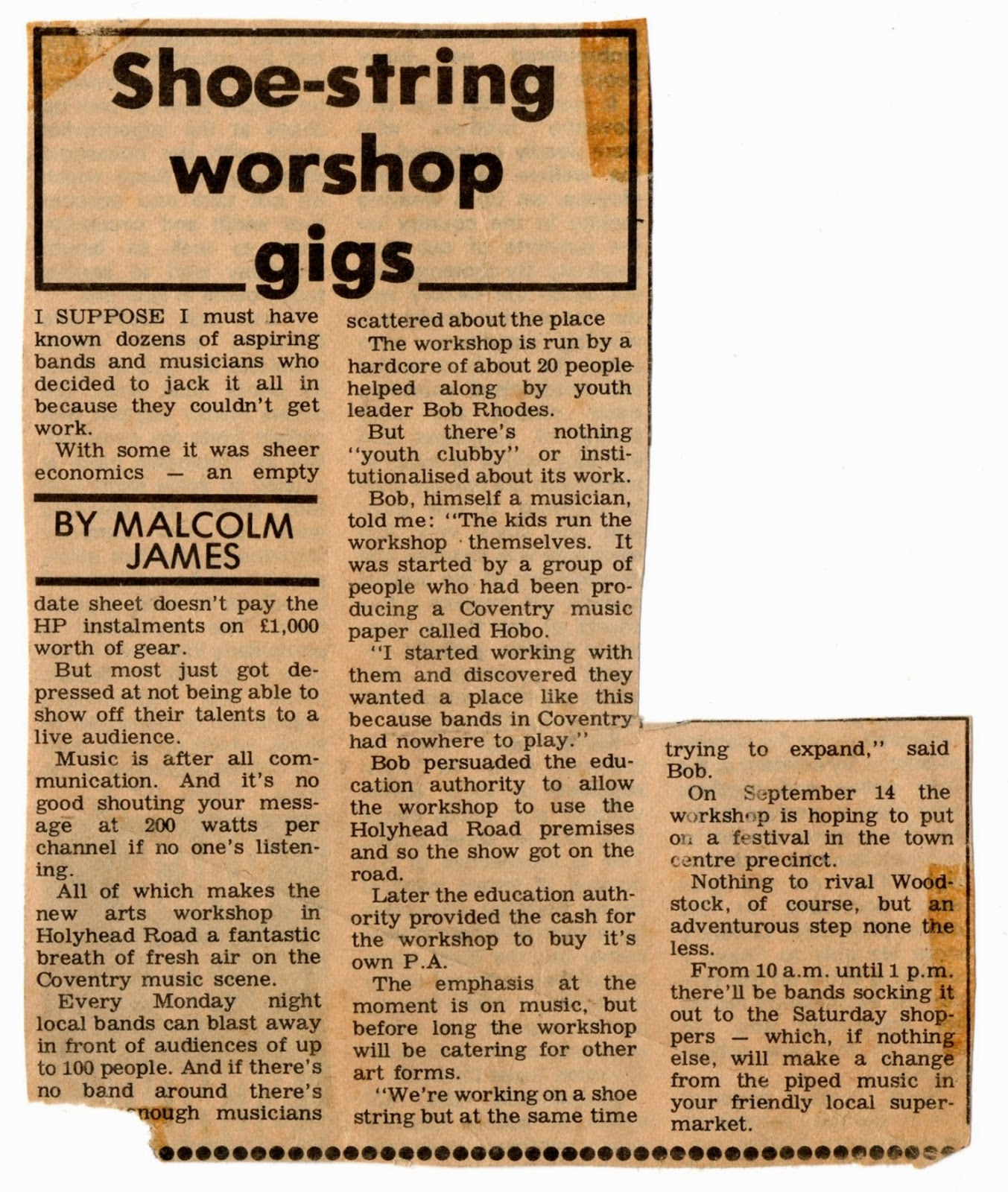 Another early press cutting fromthe Coventry Journal in 1974 regarding the Hobo Workshop.

This one was from the Coventry Evening Telegraph. 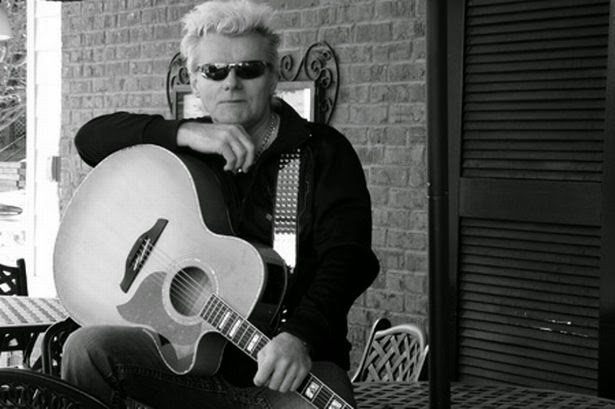 Dave Pepper, later of the X Certs, was down to perform a the precinct concert with his first band Phoenix. Sadly the Police shut the concert down before they could play. 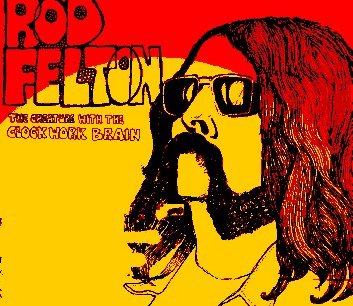 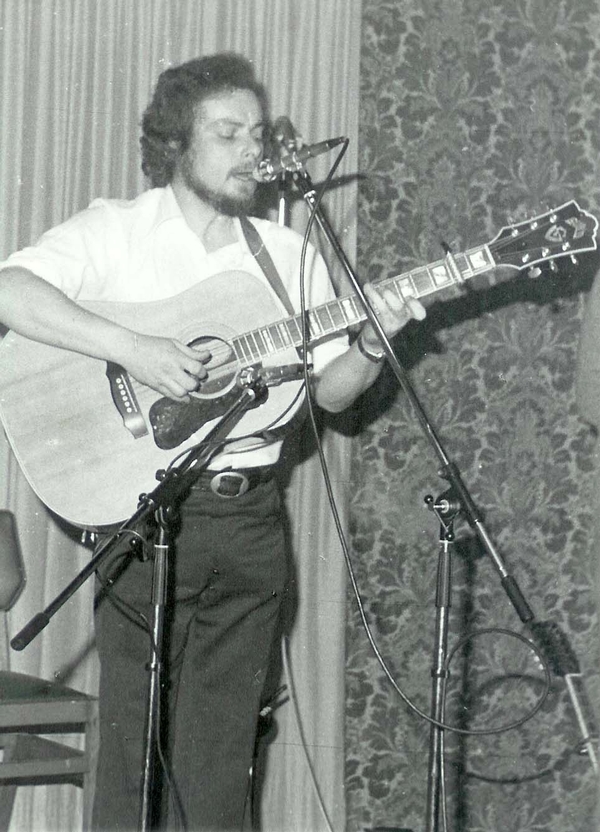