For Pete Clemons latest article for the Coventry Telegraph, he turns his attention to some of the other artistic works of Horace Panter of the The Specials. 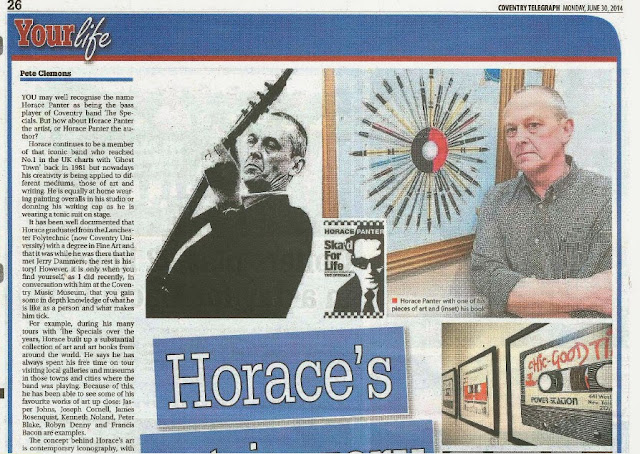 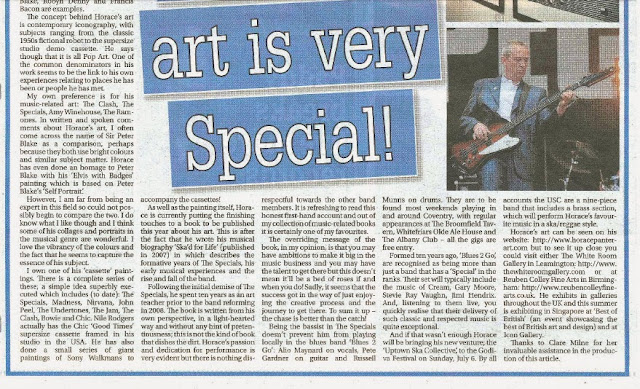 Horace's art is very art is very Special!
by Pete Clemons
YOU may well recognise the name Horace Panter as being the bass player of Coventry band e Specials. But how about Horace Panter the artist, or Horace Panter the author? Horace continues to be a member of that iconic band who reached No.1 in the UK charts with 'Ghost Town' back in 1981 but nowadays his creativity is being applied to dif-dif ferent mediums, those of art and writing. He is equally at home wearing painting overalls in his studio or donning his writing cap as he is wearing a tonic suit on stage.

It has been well documented that Horace graduated from the Lanchester Polytechnic (now Coventry University) with a degree in Fine Art and that it was while he was there that he met Jerry Dammers; the rest is history! However, it is only when you find yourself, as I did recently, in conversation with him at the Coventry Music Museum, that you gain some in depth knowledge of what he is like as a person and what makes him tick.

For example, during his many tours with e Specials over the years, Horace built up a substantial collection of art and art books from around the world. He says he has always spent his free time on tour visiting local galleries and museums in those towns and cities where the band was playing. Because of this, he has been able to see some of his favourite works of art up close: Jasper Johns, Joseph Cornell, James Rosenquist, Kenneth Noland, Peter Blake, Robyn Denny and Francis Bacon are examples.

The concept behind Horace's art is contemporary iconography, with subjects ranging from the classic 1950s fictional robot to the supersize studio demo cassette. He says though that it is all Pop Art. One of the common denominators in his work seems to be the link to his own experiences relating to places he has been or people he has met.

My own preference is for his music-related art: e Clash, e Specials, Amy Winehouse, e Ramones. In written and spoken comments about Horace's art, I often come across the name of Sir Peter Blake as a comparison, perhaps because they both use bright colours and similar subject matter. Horace has even done an homage to Peter Blake with his 'Elvis with Badges' painting which is based on Peter Blake's 'Self Portrait.'.

* However, I am far from being an expert in thiseld so could not possibly begin to compare the two. I do know what I like though and I think some of his collages and portraits in the musical genre are wonderful. I love the vibrancy of the colours and the fact that he seems to capture the essence of his subject.

I own one of his 'cassette' paintings. ere is a complete series of these; a simple idea superbly executed which includes (to date): e Specials, Madness, Nirvana, John Peel, the Undertones, the Jam, the Clash, Bowie and Chic. Nile Rodgers actually has the Chic 'Good Times' supersize cassette framed in his studio in the USA. He has also done a small series of giant paintings of Sony Walkmans to accompany the cassettes!

As well as the painting itself, Horace is currently putting the finishing touches to a book to be published this year about his art. is is after the fact that he wrote his musical biography 'Ska'd for Life' (published in 2007) in which describes the formative years of e Specials, his early musical experiences and the rise and fall of the band.

Following the initial demise of e Specials, he spent ten years as an art teacher prior to the band reforming in 2008. e book is written from his own perspective, in a light-hearted way and without any hint of pretentiousness; this is not the kind of book that dishes the dirt. Horace's passion and dedication for performance is very evident but there is nothing disrespectful towards the other band members. It is refreshing to read this honest first-hand account and out of my collection of music-related books it is certainly one of my favourites.

The overriding message of the book, in my opinion, is that you may have ambitions to make it big in the music business and you may have the talent to get there but this doesn't mean it'll be a bed of roses if and when you do! Sadly, it seems that the success got in the way of just enjoying the creative process and the journey to get there. To sum it up - the chase is better than the catch!

Being the bassist in e Specials doesn't prevent him from playing locally in the blues band 'Blues 2 Go': Alio Maynard on vocals, Pete Gardner on guitar and Russell Munns on drums. ey are to be found most weekends playing in and around Coventry, with regular appearances at e Broomeld Tavern, Whitefriars Olde Ale House and e Albany Club - all the gigs are free entry.

Formed ten years ago, 'Blues 2 Go',' are recognised as being more than just a band that has a 'Special' in the ranks. eir set will typically include the music of Cream, Gary Moore, Stevie Ray Vaughn, Jimi Hendrix. And, listening to them live, you quickly realise that their delivery of such classic and respected music is quite exceptional.

And if that wasn't enough Horace will be bringing his new venture, the 'Uptown Ska Collective',' to the Godiva Festival on Sunday, July 6. By all accounts the USC are a nine-piece band that includes a brass section, which will perform Horace's favourite music in a ska/reggae style.

Horace's art can be seen on his website: http://www.horacepanterart.com but to see it up close you could visit either e White Room Gallery in Leamington: http://www.thewhiteroomgallery.com or at Reuben Colley Fine Arts in Birmingham: http://www.reubencolleynearts.co.uk. He exhibits in galleries throughout the UK and this summer is exhibiting in Singapore at 'Best of British' (an event showcasing the best of British art and design) and at Icon Gallery.

Tanks to Clare Milne for her invaluable assistance in the production of this article. 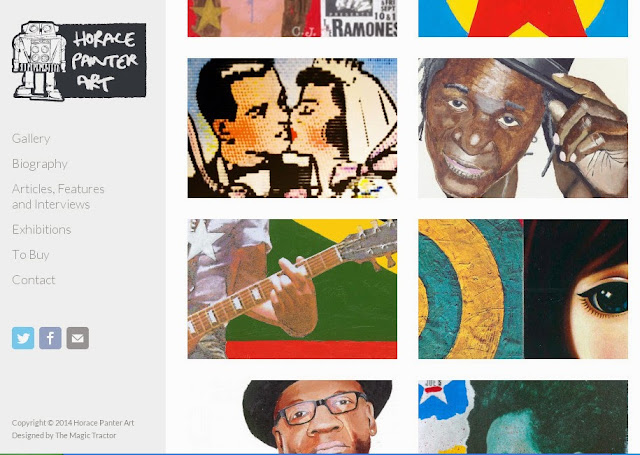 Horace and Blues to Go