The Buzzcocks in Coventry

Pete Clemons with his latest article for the Coventry Telegraph. They recently played the Godiva Festival and back in the 70's they played Mr Georges with Neil O'Connor's punk band - The Flys who continued to tour with them after that. I saw the Buzzcocks gig at Tiffany's with Penetration c 1978. 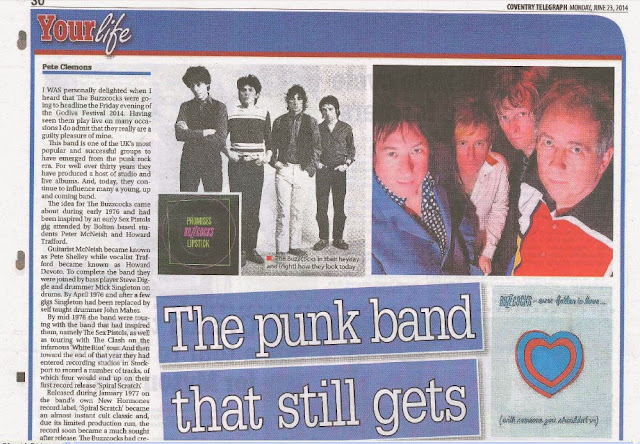 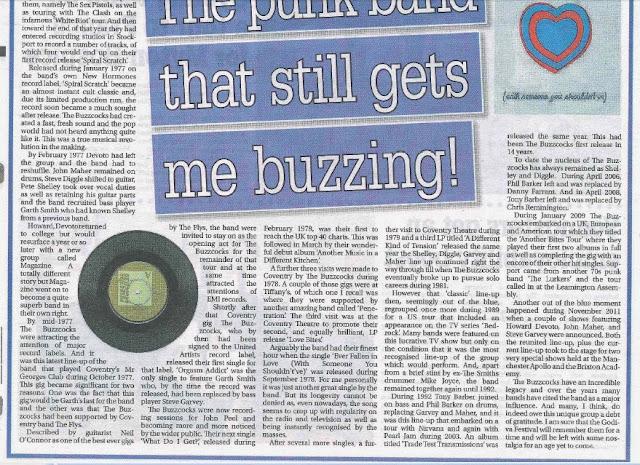 I WAS personally delighted when I heard that the Buzzcocks were going to headline the Friday evening of the Godiva Festival 2014. Having seen them play live on many occasions I do admit that they really are a guilty pleasure of mine.

This band is one of the UK's most popular and successful groups to have emerged from the punk rock era. For well over thirty years they have produced a host of studio and live albums. And, today, they continue to influence many a young, up and coming band.

The idea for e Buzzcocks came about during early 1976 and had been inspired by an early Sex Pistols gig attended by Bolton based students Peter McNeish and Howard Trafford.

Guitarist McNeish became known as Pete Shelley while vocalist Trafford became known as Howard Devoto. To complete the band they were joined by bass player Steve Diggle and drummer Mick Singleton on drums. By April 1976 and after a few gigs Singleton had been replaced by self taught drummer John Maher.

By mid1976 the band were touring with the band that had inspired them, namely e Sex Pistols, as well as touring with e Clash on the infamous 'White Riot' tour. And then toward the end of that year they had entered recording studios in Stock-Stock port to record a number of tracks, of which four would end up on their first record release 'Spiral Scratch.'.

Released during January 1977 on the band's own New Hormones record label, 'Spiral Scratch' became an almost instant cult classic and, due its limited production run, the record soon became a much sought after release. The Buzzcocks had created a fast, fresh sound and the pop world had not heard anything quite like it. is was a true musical revolution in the making.

By February 1977 Devoto had left the group and the band had to reshue. John Maher remained on drums, Steve Diggle shifted to guitar, Pete Shelley took over vocal duties as well as retaining his guitar parts and the band recruited bass player Garth Smith who had known Shelley from a previous band.

Howard, Devoto returned to college but would resurface a year or so later with a new group called Magazine. A totally different story but Magazine went on to become a quite superb band in their own right.

By mid-1977 the Buzzcocks were attracting the attention of major record labels. And it was this latest line-up of the band that played Coventry's Mr Georges Club during October 1977. is gig became significant for two reasons. One was the fact that this gig would be Garth's last for the band and the other was that the Buzzcocks had been supported by Coventry band the Flys.

Described by guitarist Neil O'Connor as one of the best ever gigs by the Flys, the band were invited to stay on as the opening act for the Buzzcocks for the remainder of that tour and at the same time attracted the attentions of EMI records.

Shortly after that Coventry gig the Buzzcocks, who by then had been signed to the United Artists record label, released their first single for that label. 'Orgasm Addict' was the only single to feature Garth Smith who, by the time the record was released, had been replaced by bass player Steve Garvey.

The Buzzcocks were now recording sessions for John Peel and becoming more and more noticed by the wider public. Their next single 'What Do I Get?', released during February 1978, was their rst to reach the UK top 40 charts. ' was followed in March by their wonderful debut album 'Another Music in a Different Kitchen'.

A further three visits were made to Coventry by the Buzzcocks during 1978. A couple of those gigs were at Tiffany's, of which one I recall was where they were supported by another amazing band called 'Penetration'. The third visit was at the Coventry Theatre to promote their second, and equally brilliant, LP release 'Love Bites.'.

* Arguably the band had their finest hour when the single 'Ever Fallen in Love (With Someone You Shouldn't've)' was released during September 1978. For me personally it was just another great single by the band. But its longevity cannot be denied as, even nowadays, the song seems to crop up with regularity on the radio and television as well as being instantly recognised by the masses.

After several more singles, a further visit to Coventry eatre during 1979 and a third LP titled 'A Different Kind of Tension' released the same year the Shelley, Diggle, Garvey and Maher line up continued right the way through till when the Buzzcocks eventually broke up to pursue solo careers during 1981.

However that 'classic' line-up then, seemingly out of the blue, regrouped once more during 1989 for a US tour that included an appearance on the TV series 'Bedrock.' .' Many bands were featured on this lucrative TV show but only on the condition that it was the most recognised line-up of the group which would perform. And, apart from a brief stint by ex-the Smiths drummer Mike Joyce, the band remained together again until 1992.

During 1992 Tony Barber joined on bass and Phil Barker on drums, replacing Garvey and Maher, and it was this line-up that embarked on a tour with Nirvana and again with Pearl Jam during 2003. An album titled 'Trade Test Transmissions' was released the same year. is had been e Buzzcocks rst release in 14 years.

During January 2009 the Buzzcocks embarked on a UK, European and American tour which they titled the 'Another Bites Tour' where they played their first two albums in full as well as completing the gig with an encore of their other hit singles. Support came from another 70s punk band the Lurkers' and the tour called in at the Leamington Assembly.

Another out of the blue moment happened during November 2011 when a couple of shows featuring Howard Devoto, John Maher, and Steve Garvey were announced. Both the reunited line-up, plus the current line-up took to the stage for two very special shows held at the Manchester Apollo and the Brixton Academy.

The Buzzcocks have an incredible legacy and over the years many bands have cited the band as a major influence. And many, I think, do indeed owe this unique group a debt of gratitude. I am sure that the Godiva Festival will remember them for a time and will be left with some nostalgia for an age yet to come.

Penetration who supported the Buzzcocks at Tiffanys in Coventry 1978

Neil O'Connor's The Flys who supported the Buzzcocks at Mr Georges and subsequently toured with them.
Neil was Hazel's older brother for those who may not know.