Pete Clemons visitation to the Coventry music scene once again - this time with a Coventry Telegraph article on Tony Martin's Echo Four and The Pickwicks - both managed by Larry Page c 1963 / 64.

There's also a an article by Pete Chambers on this post and a link to Leah D' Archy's article on Pickwick musician John Miles. 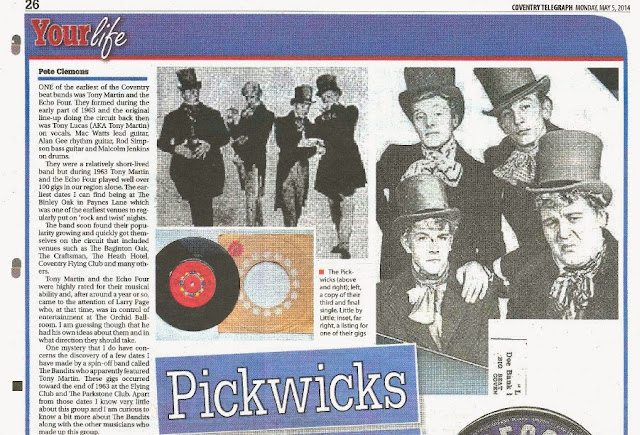 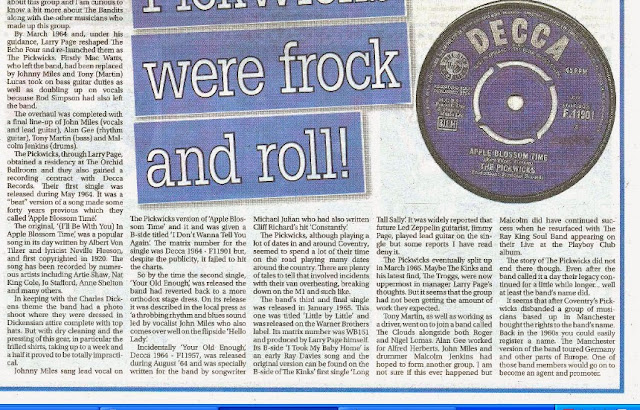 Pickwicks were frock and roll.
By Pete Clemons

ONE of the earliest of the Coventry beat bands was Tony Martin and the Echo Four. They formed during the early part of 1963 and the original line-up doing the circuit back then was Tony Lucas (AKA Tony Martin) on vocals, Mac Watts lead guitar, Alan Gee rhythm guitar, Rod Simpson bass guitar and Malcolm Jenkins on drums.

They were a relatively short-lived band but during 1963 Tony Martin and the Echo Four played well over 100 gigs in our region alone. The earliest dates I can find being at The Binley Oak in Paynes Lane which was one of the earliest venues to regularly put on 'rock and twist' nights. The band soon found their popularity growing and quickly got themselves on the circuit that included venues such as The Baginton Oak, The Craftsman, The Heath Hotel, Coventry Flying Club and many others.

Tony Martin and the Echo Four were highly rated for their musical ability and, after around a year or so, came to the attention of Larry Page who, at that time, was in control of entertainment at The Orchid Ballroom. I am guessing though that he had his own ideas about them and in what direction they should take.

One mystery that I do have concerns the discovery of a few dates I have made by a spin-off band called The Bandits who apparently featured Tony Martin. These gigs occurred toward the end of 1963 at the Flying Club and The Parkstone Club. Apart from those dates I know very little about this group and I am curious to know a bit more about The Bandits along with the other musicians who made up this group.

By March 1964 and, under his guidance, Larry Page reshaped The Echo Four and re-launched them as The Pickwicks. Firstly Mac Watts, who left the band, had been replaced by John Miles  (See Leah D'Archy's enlightening article on her grandfather John Miles HERE and Tony (Martin) Lucas took on bass guitar duties as well as doubling up on vocals because Rod Simpson had also left the band.

The Pickwicks, through Larry Page, obtained a residency at The Orchid Ballroom and they also gained a recording contract with Decca Records. Their first single was released during May 1964. It was a "beat" version of a song made some forty years previous which they called 'Apple Blossom Time.'.

* The original, '(I'll Be With You) In Apple Blossom Tim',' was a popular song in its day written by Albert Von Tilzer and lyricist Neville Fleeson, and first copyrighted in 1920. The song has been recorded by numerous artists including Artie Shaw, Nat King Cole, Jo Stafford, Anne Shelton and many others.

In keeping with the Charles Dick-k ens theme the band had a photo shoot where they were dressed in Dickensian attire complete with top hats. But with dry cleaning and the pressing of this gear, in particular the frilled shirts, taking up to a week and a half it proved to be totally impractical.

Johnny Miles sang lead vocal on The Pickwicks version of 'Apple Blossom Time' and it and was given a B-side titled 'I Don't Wanna Tell You Again'. The matrix number for the single was Decca 1964 - F11901 but, despite the publicity, it failed to hit the charts.

So by the time the second single, 'Your Old Enough',' was released the band had reverted back to a more orthodox stage dress. On its release it was described in the local press as 'a throbbing rhythm and blues sound led by vocalist John Miles who also comes over well on the flipside 'Hello Lady'.

Incidentally 'Your Old Enough',' Decca 1964 - F11957, was released during August '64 and was specially written for the band by songwriter Michael Julian who had also written Cliff Richard's hit 'Constantly'.

The Pickwicks, although playing a lot of dates in and around Coventry, seemed to spend a lot of their time on the road playing many dates around the country. There are plenty of tales to tell that involved incidents with their van overheating, breaking down on the M1 and such like.

The band's third and final single was released in January 1965. This one was titled 'Little by Little' and was released on the Warner Brothers label. Its matrix number was WB151 and produced by Larry Page himself. Its B-side 'I Took My Baby Home' is an early Ray Davies song and the original version can be found on the B-side of The Kinks' first single 'Long Tall Sally'. It was widely reported that future Led Zeppelin guitarist, Jimmy Page, played lead guitar on the single but some reports I have read deny it.

The Pickwicks eventually split up in March 1965. Maybe The Kinks and his latest find, The Troggs, were now uppermost in manager Larry Page's thoughts. But it seems that the group had not been getting the amount of work they expected.

Tony Martin, as well as working as a driver, went on to join a band called The Clouds alongside both Roger and Nigel Lomas. Alan Gee worked for Alfred Herberts. John Miles and drummer Malcolm Jenkins had hoped to form another group. I am not sure if this ever happened but Malcolm did have continued success when he resurfaced with The Ray King Soul Band appearing on their Live at the Playboy Club album.

The story of The Pickwicks did not end there though. Even after the band called it a day their legacy continued for a little while longer... well at least the band's name did.

It seems that after Coventry's Pickwicks disbanded a group of musicians based up in Manchester bought the rights to the band's name. Back in the 1960s you could easily register a name. The Manchester version of the band toured Germany and other parts of Europe. One of those band members would go on to become an agent and promoter.

................
Leah D'Archy (the granddaughter of John Miles) has written a great article on John Miles and The Pickwicks. John Miles sang on The Kinks single You Really Got me! You can read Leah's article here 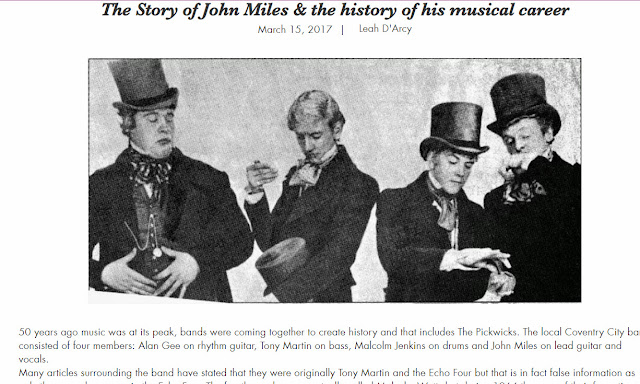 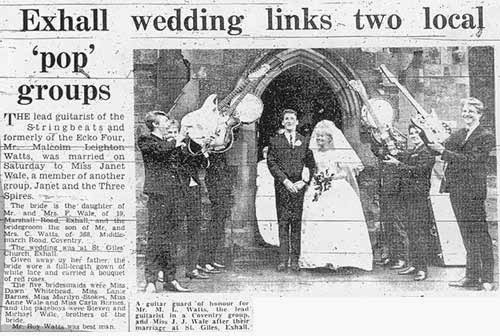 Cutting via Broadgate Gnome A to Z

The Pickwicks made three singles under Larry Page in 1964
This one, a B side from c1965,  was written by Ray Davies of the Kinks with - allegedly Jimmy Page on guitar.

Started life as Tony Martin And The Echo Four, before Larry Page signed them in March 1964 and changed 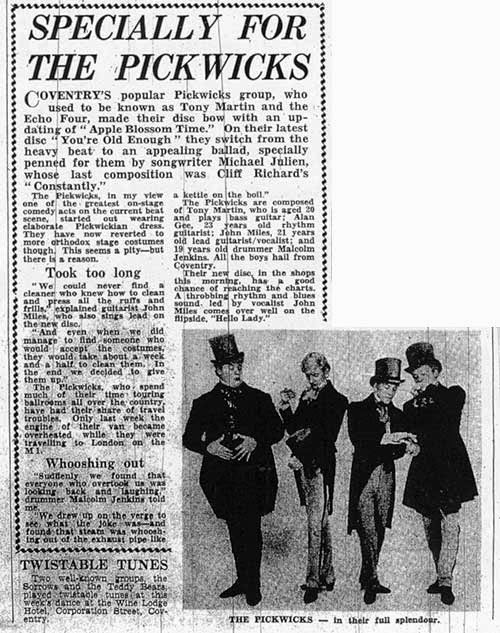 their name. Initially their stage gear was top hats and tails a' la 'Pickwick Papers' , but when they couldn't find anyone to clean them, they quickly gave the image up!

They cut 3 fine singles of tough Beat/R&B, with Jimmy Page playing lead guitar on at least the first 2 of them. 'Apple Blossom Time' is a cover of the old standard with a tough backing but fairly weak vocals, whilst the B-side has a great Page guitar solo. The A-side of the second single was a ballad, but the B-side was described as '...throbbing R&B...' 'I Took My Baby Home' is an early Ray Davies song, originally released as the B-side of 'Long Tall Sally', The Kinks first single.

They eventually split up in April 1965 with drummer Jenkins going on to join The Ray King Soul Pact / Band." 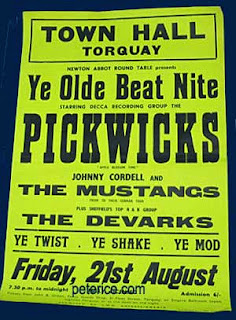 NOTE - " On Youtube Leah D'Archy
"Singles: Tony﻿ Martin and the Echo Four did NOT originate from the Pickwicks ... The Pickwicks had John Miles and he wasn't it the Echo Four ... he told me that himself ... Johnny miles is my grandad" 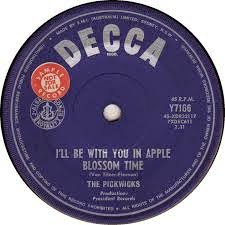