Recently Coventry lost another outstanding local artist Beverley Jones. Peter Clemons details the rise of her career in the 60's and that of the closely associated Ricky Lee, in another of his Coventry Telegraph articles. 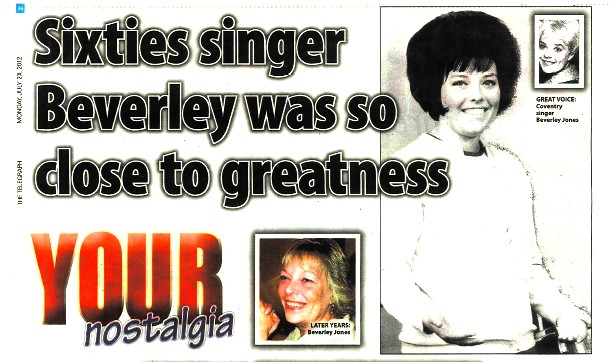 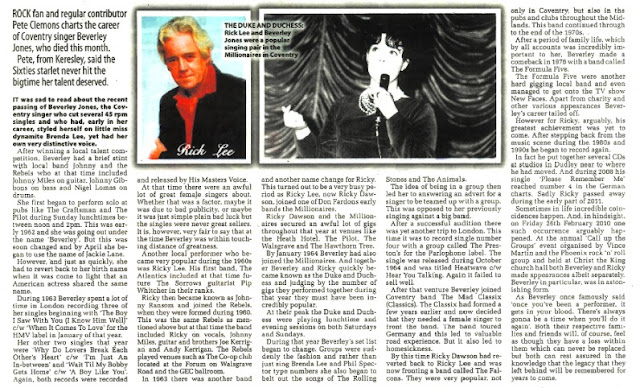 Sixties singer Beverley was so close to greatness

IT was sad to read about the recent passing of Beverley Jones, the Coventry singer who cut several 45 rpm singles and who had, early in her career, styled herself on little miss dynamite Brenda Lee, yet had her own very distinctive voice.

After winning a local talent competition, Beverley had a brief stint with local band Johnny and the Rebels who at that time included Johnny Miles on guitar, Johnny Gibbons on bass and Nigel Lomas on drums.

She first began to perform solo at pubs like The Craftsman and The Pilot during Sunday lunchtimes between noon and 2pm. This was early 1962 and she was going out under the name 'Beverley'. But this was soon changed and by April she began to use the name of Jackie Lane. However, and just as quickly, she had to revert back to her birth name when it was come to light that an American actress shared the same name.

During 1963 Beverley spent a lot of time in London recording three of her singles beginning with 'The Boy I Saw With You (I Know Him Well)' c/w 'When It Comes To Love' for the HMV label in January of that year.

Her other two singles that year were 'Why Do Lovers Break Each Other's Heart' c/w 'I'm Just An In-between' and 'Wait Til My Bobby Gets Home' c/w 'A Boy Like You'. Again, both records were recorded and released by His Masters Voice.

At that time there were an awful lot of great female singers about. Whether that was a factor, maybe it was due to bad publicity, or maybe it was just simple plain bad luck but the singles were never great sellers. It is, however, very fair to say that at the time Beverley was within touching distance of greatness.

Another local performer who became very popular during the 1960s was Ricky Lee. His first band, The Atlantics included at that time future The Sorrows guitarist Pip Whitcher in their ranks.

Ricky then became known as Johnny Ransom and joined the Rebels, when they were formed during 1960. This was the same Rebels as mentioned above but at that time the band included Ricky on vocals, Johnny Miles, guitar and brothers Joe Kerrigan and Andy Kerrigan. The Rebels played venues such as The Co-op club located at the Forum on Walsgrave Road and the GEC ballroom.

In 1963 there was another band and another name change for Ricky. This turned out to be a very busy period as Ricky Lee, now Ricky Dawson, joined one of Don Fardons early bands the Millionaires.

Ricky Dawson and the Millionaires secured an awful lot of gigs throughout that year at venues like the Heath Hotel, The Pilot, The Walsgrave and The Hawthorn Tree.

By January 1964 Beverley had also joined the Millionaires. And together Beverley and Ricky quickly became known as the Duke and Duchess and judging by the number of gigs they performed together during that year they must have been incredibly popular.

At their peak the Duke and Duchess were playing lunchtime and evening sessions on both Saturdays and Sundays.

During that year Beverley's set list began to change. Groups were suddenly the fashion and rather than just sing Brenda Lee and Phil Spector type numbers she also began to belt out the songs of The Rolling Stones and The Animals.

The idea of being in a group then led her to answering an advert for a singer to be teamed up with a group.

This was opposed to her previously singing against a big band.

After a successful audition there was yet another trip to London. This time it was to record single number four with a group called The Preston's for the Parlophone label. The single was released during October 1964 and was titled Heatwave c/w Hear You Talking. Again it failed to sell well.

After that venture Beverley joined Coventry band The Mad Classix (Classics). The Classix had formed a few years earlier and now decided that they needed a female singer to front the band. The band toured Germany and this led to valuable road experience. But it also led to homesickness.

By this time Ricky Dawson had reverted back to Ricky Lee and was now fronting a band called The Falcons.

They were very popular, not only in Coventry, but also in the pubs and clubs throughout the Midlands.

This band continued through to the end of the 1970s.

After a period of family life, which by all accounts was incredibly important to her, Beverley made a comeback in 1976 with a band called The Formula Five.

The Formula Five were another hard gigging local band and even managed to get onto the TV show New Faces. Apart from charity and other various appearances Beverley's career tailed off.

However for Ricky, arguably, his greatest achievement was yet to come. After stepping back from the music scene during the 1980s and 1990s he began to record again.

In fact he put together several CDs at studios in Dudley near to where he had moved. And during 2008 his single 'Please Remember Me' reached number 4 in the German charts. Sadly Ricky passed away during the early part of 2011.

Sometimes in life incredible coincidences happen. And, in hindsight, on Friday 26th February 2010 one such occurrence arguably happened.

At the annual 'Call up the Groups' event organised by Vince Martin and the Phoenix rock 'n' roll group and held at Christ the King church hall both Beverley and Ricky made appearances albeit separately. Beverley in particular, was in astonishing form.

As Beverley once famously said 'once you've been a performer, it gets in your blood. There's always gonna be a time when you'll do it again'. Both their respective families and friends will, of course, feel as though they have a loss within them which can never be replaced but both can rest assured in the knowledge that the legacy that they left behind will be remembered for years to come.

Lots of tracks on Youtube - here are some including Heatwave