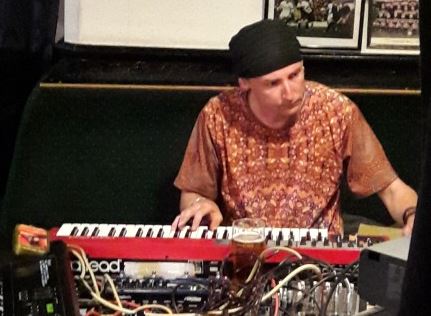 A Coventry band that has fascinated me for a while now is ‘Two Whole Quails’. Put very simply, ‘Two Whole Quails - namely Lee and Chris - produce original soundtracks that overlay, to me at least, obscure films. On the occasions I have witnessed ‘Two Whole Quails’ I have found the combined package of film and music score to be incredibly exciting and rather absorbing. Additionally, this whole project is beginning to get noticed as performances are springing up away from the city.

Wanting to know a bit more about the band history and ambitions, I contacted Lee and he kindly replied with the following fascinating overview:

‘We've been playing together, on and off, for nearly 25 years. This has been in several different bands and we've regularly recorded stuff together - for our own amusement- over the years. We became ‘The Quails’ in 2009 & recorded ‘Floyd On Quails’, a CDR that we gave away a few copies of too friends. We made some more recordings in 2010 but these were shelved as ‘The Quails’ were put on ice to make way for our next band, ‘Auntie Greville's Perforated Anvil’ (AGPA). ‘The Quails’ didn't use film, but we were keen on using spoken word, making musical / soundscape backdrops. One track, ‘A Quail’, uses excerpts from an interview with David Hockney; whilst ‘Who Is 'They'?’ features highlights from a Q&A with Hunter S. Thompson. (We have performed an entire set backing Hunter S. Thompson!).

AGPA was where the film thing was born really. We had the idea of making videos to go with each of the numbers in the set & projecting these (along with a couple of screens for oils). We were into grainy, lo-fi, low- res mobile phone footage and made our own films to accompany each of the numbers in the set. For one number, we used a section from a 1924 silent film called ‘Greed’ which, I guess, was our first foray into scoring silent films. In AGPA, the music came first, and the films were made afterwards.

AGPA dissolved & in 2013 we returned to ‘The Quails’, becoming ‘Two Whole Quails’ as we found that 4 other bands called The Quails! We decided to write a score for a silent film. Although not strictly 'silent', Jan Svankmajer's ‘Alice’ was chosen. I'd seen it a year or two before and my wife suggested it when we began to search for films. It took about 12 months to write. We split the film into sections and wrote the music independently of one another. We would meet up each week and play one another the sections we'd worked on until we had the whole thing recorded. We then went back and spent 6 months learning how to play the whole thing together and turn it into a piece suitable for live performance. We were keen for people to watch the film, not the 'band' - the idea being that we fade into the background, there to supplement the images on screen.

We've performed ‘Alice’ in its entirety several times but it weighs in at >80mins so we quickly realised that we needed a more versatile 'set'. We looked at reviving ‘Greed’ and this eventually led to our finding our way to lesser known early 20th century surrealist cinema.

With Maya Deren's ‘Meshes of the Afternoon’, we wrote the whole score together. It's one of our most improvised soundtracks and was written to the film. This is by far our most popular film / score - we're about to hit 100,000 watches on You Tube!

We tend to work on the music together, taking cues from the film as our starting point - what the visual image 'sounds' like. It will usually be that one of us gets a particular idea - either at the time or in-between rehearsals - and we take that on then go from there. As the process goes on, the soundtrack becomes more tightly locked into the film. Sometimes we work on pieces individually, but we tend to refine them together. There is a lot of improvisation in our performances. These improvisations are structured by responding to the film. These eventually form the basis of the soundtrack & we end up with a series of pieces, each of which is triggered by certain visual cues.

Where we make our own films, the process is different again. With ‘Radio New World’, we started with the narrative. This is our friend's story about broadcasting his own pirate radio station from his parents' garden shed in the 1960s. We got him into the studio to tell his tell his tale then put the story to music. The film came last & illustrates the narrative. With our new work in progress, ‘The Chancellor's Dinner’, the music came first. We had to come up with something very quickly for an event that Coventry University had booked us for at the Herbert Art Gallery - the Chancellor's 175th Annual Dinner! This 20-minute piece came out of nowhere and is completely improvised. We have performed it twice without film & we are currently working on a film comprised largely of footage of meals / food that people have sent us.

We are also putting the finishing touches to a soundtrack we were commissioned to write by German author / director, Daniel Hadrovic. The film is called ‘Tote Mich Noch Einmal’ (‘Kill Me Again’). It's scheduled for release Autumn 2019 and will be screened at film festivals in Germany and hopefully in the UK. There may be a small DVD release too. We've yet to see any part of the film and the score has been written to Daniel's extremely brief brief! It will be interesting to see how this turns out and how he edits the music to the film. We have another early 20th century surrealist film that we've 'mapped out' ready to start work on before Christmas and we are looking forward to performing ‘The Chancellor's Dinner’ - with film - early in 2019’.

Huge thanks to Lee for his concise reply. This project is no doubt a labour of love. But it certainly has legs. What ‘Two Whole Quails’ are creating right now is, I think, unique and particularly exciting. I would certainly recommend the ‘TWQ experience to anyone who is remotely interested in vintage footage and musical soundtracks. 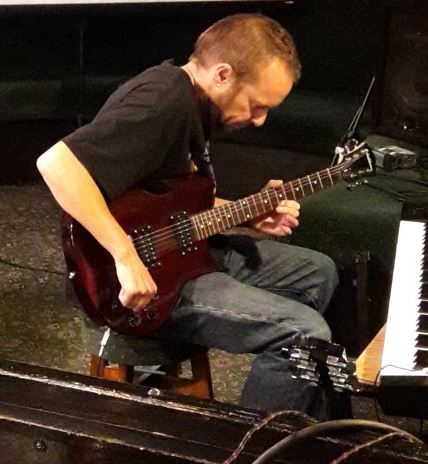