Another Pete Clemons special from the Coventry Telegraph. Pete takes a look at a new biographical trilogy of the life of  Pop Music impresario Reg Calvert. 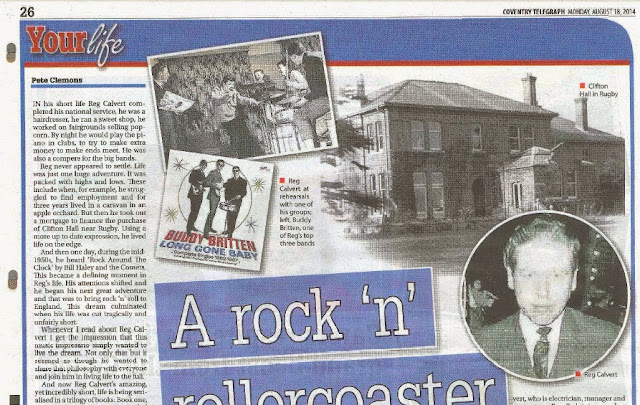 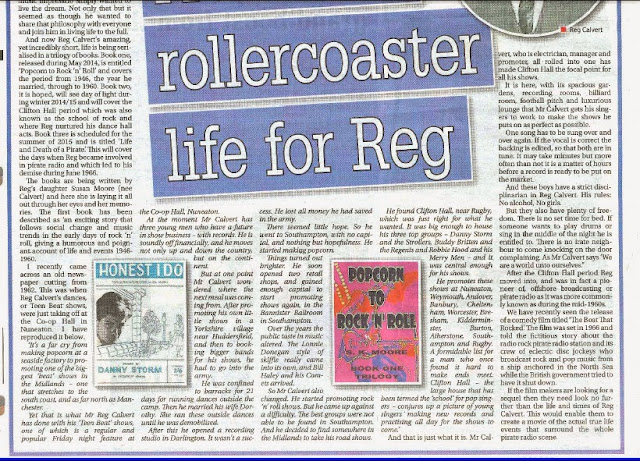 A rock 'n' rollercoaster life for Reg.
By Pete Clemons.

IN his short life Reg Calvert completed his national service, he was a hairdresser, he ran a sweet shop, he worked on fairgrounds selling popcorn. By night he would play the piano in clubs, to try to make extra money to make ends meet. He was also a compere for the big bands.

Reg never appeared to settle. Life was just one huge adventure. It was packed with highs and lows. ese include when, for example, he struggled to find employment and for three years lived in a caravan in an apple orchard. But then he took out a mortgage to finance the purchase of Clifton Hall near Rugby. Using a more up to date expression, he lived life on the edge.

And then one day, during the mid-1950s, he heard 'Rock Around the Clock' by Bill Haley and the Comets. This became a defining moment in Reg's life. His attentions shifted and he began his next great adventure and that was to bring rock 'n' roll to England. This dream culminated when his life was cut tragically and unfairly short.

Whenever I read about Reg Calvert I get the impression that this music impresario simply wanted to live the dream. Not only that but it seemed as though he wanted to share that philosophy with everyone and join him in living life to the full.

And now Reg Calvert's amazing, yet incredibly short, life is being serialised in a trilogy of books. Book one, released during May 2014, is entitled 'Popcorn to Rock 'n' Roll' and covers the period from 1946, the year he married, through to 1960. Book two, it is hoped, will see day of light during winter 2014/15 and will cover the Clifton Hall period which was also known as the school of rock and where Reg nurtured his dance hall acts. Book three is scheduled for the summer of 2015 and is titled 'Life and Death of a Pirate.' . is will cover the days when Reg became involved in pirate radio and which led to his demise during June 1966.

The books are being written by Reg's daughter Susan Moore (nee Calvert) and here she is laying it all out through her eyes and her memories. The first book has been described as 'an exciting story that follows social change and music trends in the early days of rock 'n' roll, giving a humorous and poignant account of life and events 1946-1960.

I recently came across an old newspaper cutting from 1962. This was when Reg Calvert's dances, or Teen Beat shows, were just taking o at the Co-op Hall in Nuneaton. I have reproduced it below.

'It's a far cry from making popcorn at a seaside factory to promoting one of the biggest 'beat' shows in the Midlands - one that stretches to the south coast, and as far north as Manchester.

Yet that is what Mr Reg Calvert has done with his 'Teen Beat' shows, one of which is a regular and popular Friday night feature at the Co-op Hall, Nuneaton.

At the moment Mr Calvert has three young men who have a future in show business - with records. He is soundly off financially, and he moves not only up and down the country, but on the continent.

But at one point Mr Calvert wondered where the next meal was coming from. After promoting his own little shows in a Yorkshire village near Huddersfield, and then to booking bigger bands for his shows, he had to go into the army.

He was confined to barracks for 21 days for running dances outside the camp. Then he married his wife Dorothy. She ran these outside dances until he was demobilised.

After this he opened a recording studio in Darlington. It wasn't a success. He lost all money he had saved in the army. There seemed little hope. So he went to Southampton, with no capital, and nothing but hopefulness. He started making popcorn.

Over the years the public taste in music altered. The Lonnie Donegan style of skiffle really came into its own, and Bill Haley and his Comets arrived.

So Mr Calvert also changed. He started promoting rock 'n' roll shows. But he came up against a difficulty. The best groups were not able to be found in Southampton. And he decided to find somewhere in the Midlands to take his road shows.

He found Clifton Hall, near Rugby, which was just right for what he wanted. It was big enough to house three top groups - Danny Storm and the Strollers, Buddy Britten and the Regents and Robbie Hood and his Merry Men - and it was central enough for his shows.

He promotes these shows at Nuneaton, Weymouth, Andover, Banbury, Cheltenham, Worcester, Evesham, Kidderminster, Burton, Atherstone, Southampton and Rugby. A formidable list for a man who once found it hard to make ends meet. Clifton Hall - the large house that has been termed the 'school' for pop singing - conjures up a picture of young singers making new records and practising all day for the shows to come. And that is just what it is. Mr Calvert, who is electrician, manager and promoter, all rolled into one, has made Clifton Hall the focal point for all his shows.

It is here, with its spacious gardens, recording rooms, billiard room, football pitch and luxurious lounge that Mr Calvert gets his singers to work to make the shows he puts on as perfect as possible.

One song has to be sung over and over again. If the vocal is correct the backing is edited, so that both are in tune. It may take minutes but more often than not it is a matter of hours before a record is ready to be put on the market.

And these boys have a strict disciplinarian in Reg Calvert. His rules: No alcohol, No girls.

But they also have plenty of freedom. There is no set time for bed. If someone wants to play drums or sing in the middle of the night he is entitled to. There is no irate neighbour to come knocking on the door complaining. As Mr Calvert says 'We are a world unto ourselves.'' '

After the Clifton Hall period Reg moved into, and was in fact a pioneer of off-shore broadcasting or pirate radio as it was more commonly known as during the mid-1960s. We have recently seen the release of a comedy entitled 'The Boat that Rocked'. The film was set in 1966 and told the fictitious story about the radio rock pirate radio station and its crew of eclectic disc jockeys who broadcast rock and pop music from a ship anchored in the North Sea while the British government tried to have it shut down.

If the film makers are looking for a sequel then they need look no further than the life and times of Reg Calvert. is would enable them to create a movie of the actual true life events that surround the whole pirate radio scene.

Here is a direct link to another article by Pete Clemons on Reg Calvert on this blog.
http://coventrygigs.blogspot.co.uk/2012/04/reg-calvert-and-johnny-washington.html 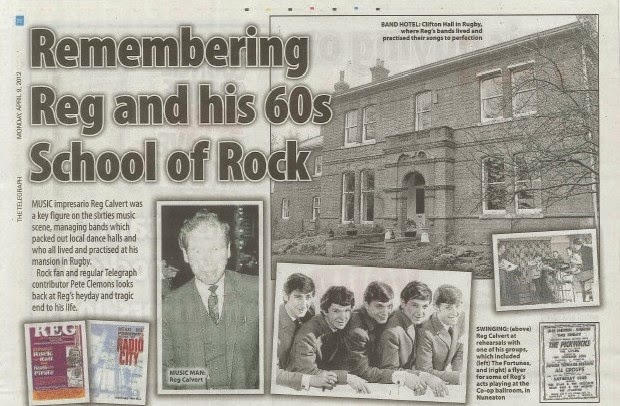 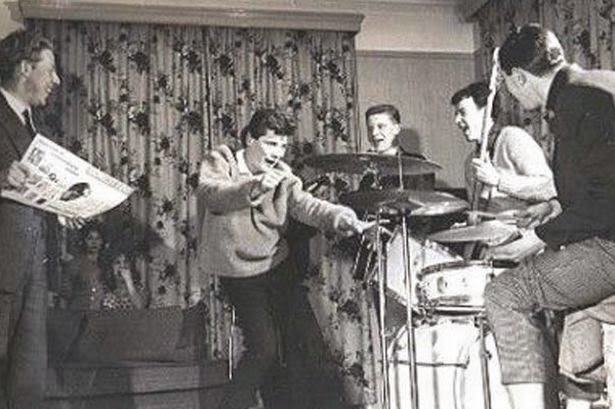 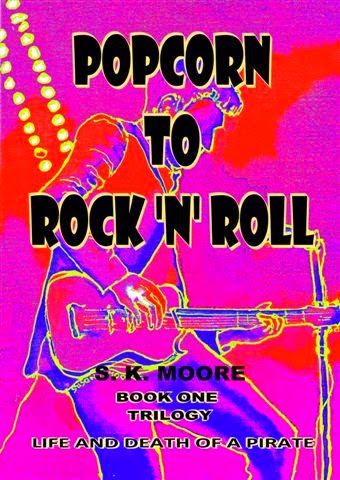 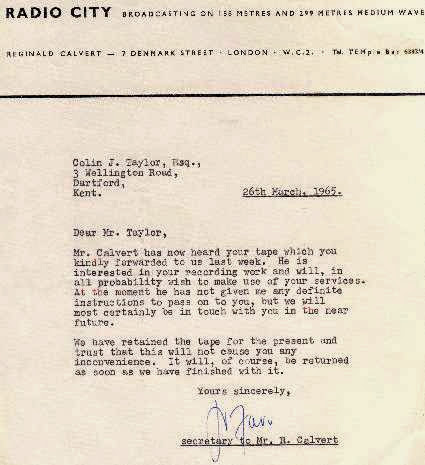 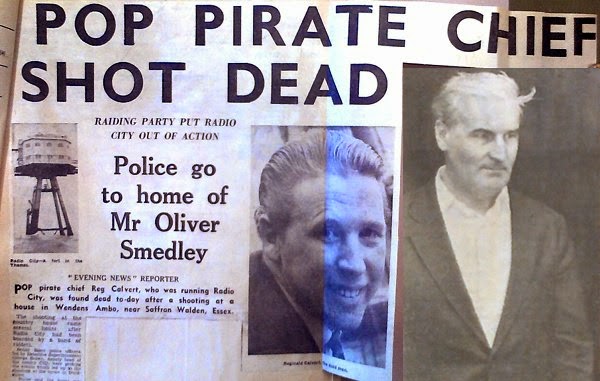 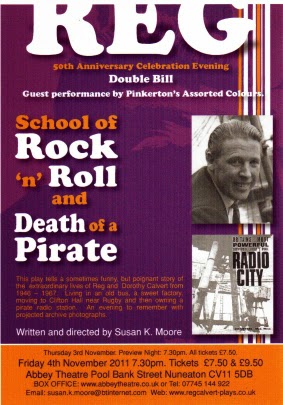