This time Pete Clemons looks at the growing international reputation of  a Coventry virtuoso guitarist - Si Hayden, who plays anything from Classical, flamenco, fret-less, Jazz and folk and of course is a member of Joe O'Donnell's Shkayla. All for his latest article for the Coventry Telegraph.... 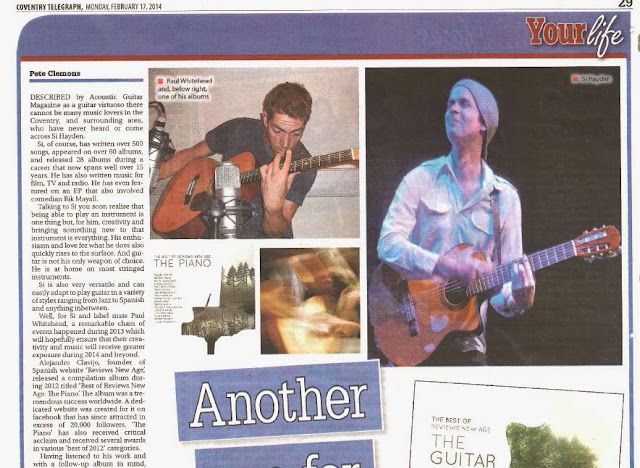 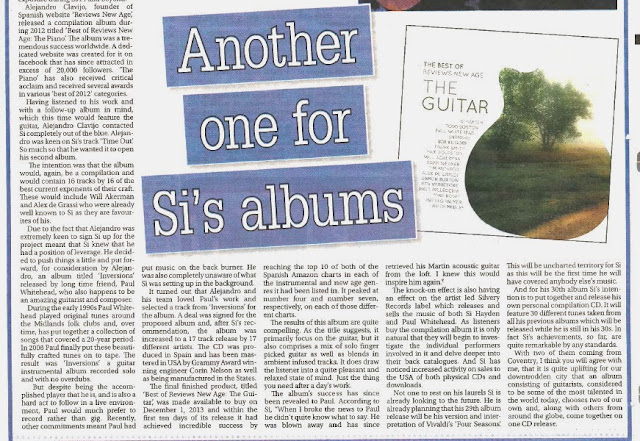 Another for One Si's Albums.
Pete Clemons

DESCRIBED by Acoustic Guitar Magazine as a guitar virtuoso there cannot be many music lovers in the Coventry, and surrounding area, who have never heard or come across Si Hayden.

Si, of course, has written over 500 songs, appeared on over 60 albums, and released 28 albums during a career that now spans well over 15 years. He has also written music for film, TV and radio. He has even featured on an EP that also involved comedian Rik Mayall.

Talking to Si you soon realise that being able to play an instrument is one thing but, for him, creativity and bringing something new to that instrument is everything. His enthusiasm and love for what he does also quickly rises to the surface. And guitar is not his only weapon of choice. He is at home on most stringed instruments.

Si is also very versatile and can easily adapt to play guitar in a variety of styles ranging from Jazz to Spanish and anything inbetween.

Well, for Si and label mate Paul Whitehead, a remarkable chain of events happened during 2013 which will hopefully ensure that their creativity and music will receive greater exposure during 2014 and beyond.

Alejandro Clavijo, founder of Spanish website 'Reviews New Age', released a compilation album during 2012 titled 'Best of Reviews New Age: The Piano'. The album was a tremendous success worldwide. A dedicated website was created for it on facebook that has since attracted in excess of 20,000 followers. 'The Piano' has also received critical acclaim and received several awards in various 'best of 2012' categories.

Having listened to his work and with a follow-up album in mind, which this time would feature the guitar, Alejandro Clavijo contacted Si completely out of the blue. Alejandro was keen on Si's track 'Time Out'. So much so that he wanted it to open his second album.

The intention was that the album would, again, be a compilation and would contain 16 tracks by 16 of the best current exponents of their craft. These would include Will Akerman and Alex de Grassi who were already well known to Si as they are favourites of his.

Due to the fact that Alejandro was extremely keen to sign Si up for the project meant that Si knew that he had a position of leverage. He decided to push things a little and put forward, for consideration by Alejandro, an album titled 'Inversions' released by long time friend, Paul Whitehead, who also happens to be an amazing guitarist and composer.

During the early 1990s Paul Whitehead played original tunes around the Midlands folk clubs and, over time, has put together a collection of songs that covered a 20-year period. In 2008 Paul finally put these beautifully crafted tunes on to tape. The result was 'Inversions' a guitar instrumental album recorded solo and with no overdubs.

But despite being the accomplished player that he is, and is also a hard act to follow in a live environment, Paul would much prefer to record rather than gig. Recently, other commitments meant Paul had put music on the back burner. He was also completely unaware of what Si was setting up in the background.

It turned out that Alejandro and his team loved Paul's work and selected a track from 'Inversions' for the album. A deal was signed for the proposed album and, after Si's recommendation, the album was increased to a 17 track release by 17 different artists. The CD was produced in Spain and has been mastered in USA by Grammy Award winning engineer Corin Nelson as well as being manufactured in the States.

The final finished product, titled 'Best of Reviews New Age: The Guitar', was made available to buy on December 1, 2013 and within the first ten days of its release it had achieved incredible success by reaching the top 10 of both of the Spanish Amazon charts in each of the instrumental and new age genres it had been listed in. It peaked at number four and number seven, respectively, on each of those different charts.

The results of this album are quite compelling. As the title suggests, it primarily focus on the guitar, but it also comprises a mix of solo finger picked guitar as well as blends in ambient infused tracks. It does draw the listener into a quite pleasant and relaxed state of mind. Just the thing you need after a day's work.

The album's success has since been revealed to Paul. According to Si, "When I broke the news to Paul he didn't quite know what to say. He was blown away and has since retrieved his Martin acoustic guitar from the loft. I knew this would inspire him again."

The knock-on effect is also having an effect on the artist led Silvery Records label which releases and sells the music of both Si Hayden and Paul Whitehead. As listeners buy the compilation album it is only natural that they will begin to investigate the individual performers involved in it and delve deeper into their back catalogues. And Si has noticed increased activity on sales to the USA of both physical CDs and downloads.

Not one to rest on his laurels Si is already looking to the future. He is already planning that his 29th album release will be his version and interpretation of Vivaldi's 'Four Seasons'.

This will be uncharted territory for Si as this will be the first time he will have covered anybody else's music.

And for his 30th album Si's intention is to put together and release his own personal compilation CD. It will feature 30 different tunes taken from all his previous albums which will be released while he is still in his 30s. In fact Si's achievements, so far, are quite remarkable by any standards.

With two of them coming from Coventry, I think you will agree with me, that it is quite uplifting for our downtrodden city that an album consisting of guitarists, considered to be some of the most talented in the world today, chooses two of our own and, along with others from around the globe, come together on one CD release.

Posted by Coventry Music Scene Archive at 10:35 AM