50 Years of the Coventry Folk Scene

After a summer break, Pete Clemons is back with an article on the Coventry Folk Scene. 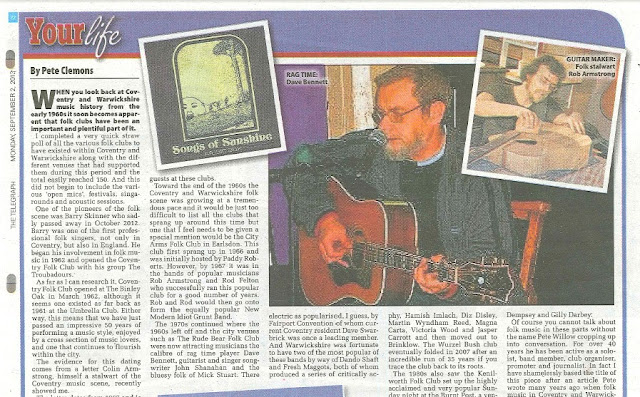 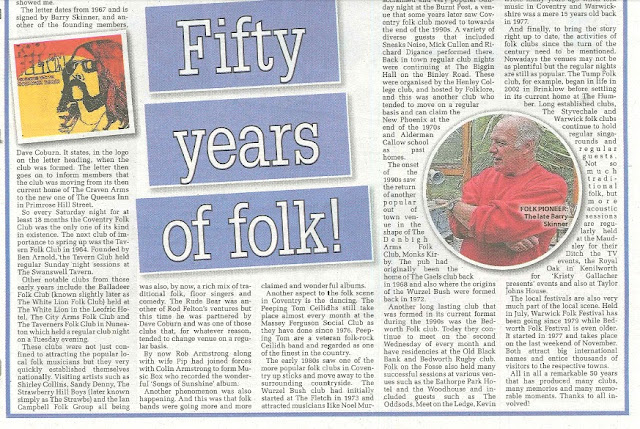 WHEN you look back at Coventry and Warwickshire music history from the early 1960s it soon becomes apparent that folk clubs have been an important and plentiful part of it.

I completed a very quick straw poll of all the various folk clubs to have existed within Coventry and Warwickshire along with the different venues that had supported them during this period and the total easily reached 150. And this did not begin to include the various 'open mics', festivals, singarounds and acoustic sessions. One of the pioneers of the folk scene was Barry Skinner who sadly passed away in October 2012. Barry was one of the first professional folk singers, not only in Coventry, but also in England. He began his involvement in folk music in 1962 and opened the Coventry Folk Club with his group The Troubadours.

As far as I can research it, Coventry Folk Club opened at The Binley Oak in March 1962, although it seems one existed as far back as 1961 at the Umbrella Club. Either way, this means that we have just passed an impressive 50 years of performing a music style, enjoyed by a cross section of music lovers, and one that continues to flourish within the city.

The evidence for this dating comes from a letter Colin Armstrong, himself a stalwart of the Coventry music scene, recently showed me.

The letter dates from 1967 and is signed by Barry Skinner, and another of the founding members, Dave Coburn. It states, in the logo on the letter heading, when the club was formed. The letter then goes on to inform members that the club was moving from its then current home of The Craven Arms to the new one of The Queens Inn in Primrose Hill Street.

So every Saturday night for at least 18 months the Coventry Folk Club was the only one of its kind in existence. The next club of importance to spring up was the Tavern Folk Club in 1964. Founded by Ben Arnold, the Tavern Club held regular Sunday night sessions at The Swanswell Tavern.

Other notable clubs from those early years include the Balladeer Folk Club (known slightly later as The White Lion Folk Club) held at The White Lion in the Leofric Hotel, The City Arms Folk Club and The Taverners Folk Club in Nuneaton which held a regular club night on a Tuesday evening.

These clubs were not just confined to attracting the popular local folk musicians but they very quickly established themselves nationally. Visiting artists such as Shirley Collins, Sandy Denny, The Strawberry Hill Boys (later known simply as The Strawbs) and the Ian Campbell Folk Group all being guests at these clubs.

Toward the end of the 1960s the Coventry and Warwickshire folk scene was growing at a tremendous pace and it would be just too difficult to list all the clubs that sprang up around this time but one that I feel needs to be given a special mention would be the City Arms Folk Club in Earlsdon. This club first sprang up in 1966 and was initially hosted by Paddy Roberts.

However, by 1967 it was in the hands of popular musicians Rob Armstrong and Rod Felton who successfully ran this popular club for a good number of years. Rob and Rod would then go onto form the equally popular New Modern Idiot Grunt Band.

The 1970s continued where the 1960s left off and the city venues such as The Rude Bear Folk Club were now attracting musicians the calibre of rag time player Dave Bennett, guitarist and singer songwriter John Shanahan and the bluesy folk of Mick Stuart. There was also, by now, a rich mix of traditional folk, floor singers and comedy. The Rude Bear was another of Rod Felton's ventures but this time he was partnered by Dave Coburn and was one of those clubs that, for whatever reason, tended to change venue on a regular basis.

By now Rob Armstrong along with wife Pip had joined forces with Colin Armstrong to form Music Box who recorded the wonderful 'Songs of Sunshine' album. Another phenomenon was also happening. And this was that folk bands were going more and more electric as popularised, I guess, by Fairport Convention of whom current Coventry resident Dave Swarbrick was once a leading member. And Warwickshire was fortunate to have two of the most popular of these bands by way of Dando Shaft and Fresh Maggots, both of whom produced a series of critically acclaimed and wonderful albums. Another aspect to the folk scene in Coventry is the dancing. The Peeping Tom Ceilidhs still take place almost every month at the Massey Ferguson Social Club as they have done since 1976. Peeping Tom are a veteran folk-rock Ceilidh band and regarded as one of the finest in the country.

The early 1980s saw one of the more popular folk clubs in Coventry up sticks and move away to the surrounding countryside. The Wurzel Bush club had initially started at The Fletch in 1973 and attracted musicians like Noel Murphy, Hamish Imlach, Diz Disley, Martin Wyndham Reed, Magna Carta, Victoria Wood and Jasper Carrott and then moved out to Brinklow. The Wurzel Bush club eventually folded in 2007 after an incredible run of 35 years if you trace the club back to its roots.

The 1980s also saw the Kenilworth Folk Club set up the highly acclaimed and very popular Sunday night at the Burnt Post, a venue that some years later saw Coventry folk club moved to towards the end of the 1990s. A variety of diverse guests that included Sneaks Noise, Mick Cullen and Richard Digance performed there. Back in town regular club nights were continuing at The Biggin Hall on the Binley Road. These were organised by the Henley College club, and hosted by Folklore, and this was another club who tended to move on a regular basis and can claim the New Phoenix at the end of the 1970s and Alderman Callow school as past homes.

The onset of the 1990s saw the return of another popular out of town venue in the shape of The Denbigh Arms Folk Club, Monks Kirby.

The pub had originally been the home of The Gaels club back in 1968 and also where the origins of the Wurzel Bush were formed back in 1972.

Another long lasting club that was formed in its current format during the 1990s was the Bedworth Folk club. Today they continue to meet on the second Wednesday of every month and have residencies at the Old Black Bank and Bedworth Rugby club. Folk on the Fosse also held many successful sessions at various venues such as the Eathorpe Park Hotel and the Woodhouse and included guests such as The Oddsods, Meet on the Ledge, Kevin Dempsey and Gilly Darbey.

Of course you cannot talk about folk music in these parts without the name Pete Willow cropping up into conversation. For over 40 years he has been active as a soloist, band member, club organiser, promoter and journalist. In fact I have shamelessly based the title of this piece after an article Pete wrote many years ago when folk music in Coventry and Warwickshire was a mere 15 years old back in 1977.

And finally, to bring the story right up to date, the activities of folk clubs since the turn of the century need to be mentioned. Nowadays the venues may not be as plentiful but the regular nights are still as popular. The Tump Folk club, for example, began in life in 2002 in Brinklow before settling in its current home at The Humber.

Long established clubs, The Styvechale and Warwick folk clubs continue to hold regular singarounds and regular guests. Not so much tradi-tional folk, but more acoustic sessions are regularly held at the Maudsley for their Ditch the TV events, the Royal Oak in Kenilworth foLK PIONEER: The late Barry Skinner for 'Kristy Gallacher presents' events and also at Taylor Johns House.

The local festivals are also very much part of the local scene. Held in July, Warwick Folk Festival has been going since 1979 while Bedworth Folk Festival is even older. It started in 1977 and takes place on the last weekend of November. Both attract big international names and entice thousands of visitors to the respective towns.

All in all a remarkable 50 years that has produced many clubs, many memories and many memorable moments. Thanks to all involved!

View some of the sources and artists on this Hobo - Coventry Folk Scene blog.
http://coventryfolkclubs.blogspot.co.uk/