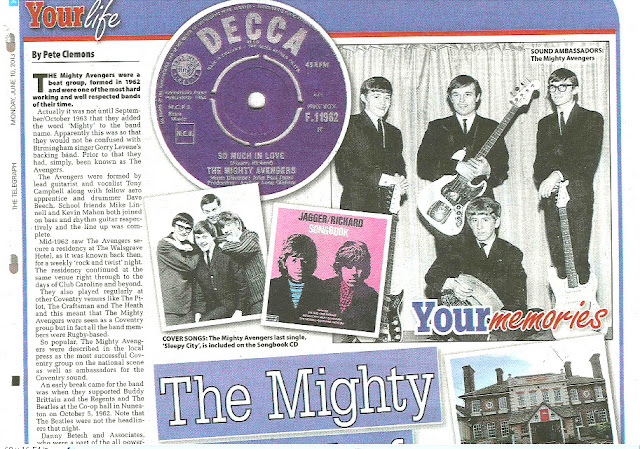 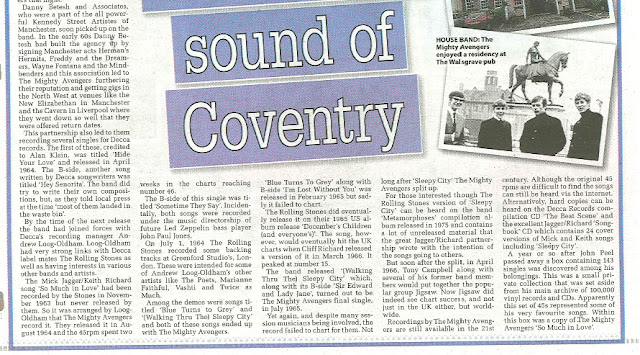 The Mighty sound of Coventry; Your memories.

THE Mighty Avengers were a beat group, formed in 1962 and were one of the most hard working and well respected bands of their time.

Actually it was not until September/October 1963 that they added the word 'Mighty' to the band name. Apparently this was so that they would not be confused with Birmingham singer Gerry Levene's backing band. Prior to that they had, simply, been known as The Avengers.

The Avengers were formed by lead guitarist and vocalist Tony Campbell along with fellow aero apprentice and drummer Dave Beech. School friends Mike Linnell and Kevin Mahon both joined on bass and rhythm guitar respectively and the line up was complete.

Mid-1962 saw The Avengers secure a residency at The Walsgrave Hotel, as it was known back then, for a weekly 'rock and twist' night. The residency continued at the same venue right through to the days of Club Caroline and beyond.

They also played regularly at other Coventry venues like The Pilot, The Craftsman and The Heath and this meant that The Mighty Avengers were seen as a Coventry group but in fact all the band members were Rugby-based.

So popular, The Mighty Avengers were described in the local press as the most successful Coventry group on the national scene as well as ambassadors for the Coventry sound.

An early break came for the band was when they supported Buddy Brittain and the Regents and The Beatles at the Co-op hall in Nuneaton on October 5, 1962. Note that The Beatles were not the headliners that night.

Danny Betesh and Associates, who were a part of the all powerful Kennedy Street Artistes of Manchester, soon picked up on the band. In the early 60s Danny Betesh had built the agency up by signing Manchester acts Herman's Hermits, Freddy and the Dreamers, Wayne Fontana and the Mindbenders and this association led to The Mighty Avengers furthering their reputation and getting gigs in the North West at venues like the New Elizabethan in Manchester and the Cavern in Liverpool where they went down so well that they were offered return dates.

This partnership also led to them recording several singles for Decca records. The first of these, credited to Alan Klein, was titled 'Hide Your Love' and released in April 1964. The B-side, another song written by Decca songwriters was titled 'Hey Senorita'. The band did try to write their own compositions, but, as they told local press at the time 'most of them landed in the waste bin'.

By the time of the next release the band had joined forces with Decca's recording manager Andrew Loog-Oldham. Loog-Oldham had very strong links with Decca label mates The Rolling Stones as well as having interests in various other bands and artists.

The Mick Jagger/Keith Richard song 'So Much in Love' had been recorded by the Stones in November 1963 but never released by them. So it was arranged by Loog-Oldham that The Mighty Avengers record it. They released it in August 1964 and the 45rpm spent two weeks in the charts reaching number 46.

The B-side of this single was titled 'Sometime They Say'. Incidentally, both songs were recorded under the music directorship of future Led Zeppelin bass player John Paul Jones, On July 1, 1964 The Rolling Stones recorded some backing tracks at Greenford Studio's, London.

These were intended for some of Andrew Loog-Oldham's other artists like The Poets, Marianne Faithful, Vashti and Twice as Much.

Among the demos were songs titled 'Blue Turns to Grey' and '(Walking Thru The) Sleepy City' and both of these songs ended up with The Mighty Avengers.

'Blue Turns To Grey' along with B-side 'I'm Lost Without You' was released in February 1965 but sadly it failed to chart.

The Rolling Stones did eventually release it on their 1965 US album release 'December's Children (and everyone's)'. The song, however, would eventually hit the UK charts when Cliff Richard released a version of it in March 1966. It peaked at number 15.

The band released '(Walking Thru The) Sleepy City' which, along with its B-side 'Sir Edward and Lady Jane', turned out to be The Mighty Avengers final single, in July 1965.

Yet again, and despite many session musicians being involved, the record failed to chart for them. Not long after 'Sleepy City' The Mighty Avengers split up.

For those interested though The Rolling Stones version of 'Sleepy City' can be heard on the band 'Metamorphoses' compilation album released in 1975 and contains a lot of unreleased material that the great Jagger/Richard partnership wrote with the intention of the songs going to others.

But soon after the split, in April 1966, Tony Campbell along with several of his former band members would put together the popular group Jigsaw. Now Jigsaw did indeed see chart success, and not just in the UK either, but worldw ide.

Recordings by The Mighty Avengers are still available in the 21st century. Although the original 45 rpms are difficult to find the songs can still be heard via the internet. Alternatively, hard copies can be heard on the Decca Records compilation CD 'The Beat Scene' and the excellent Jagger/Richard 'Songbook' CD which contains 24 cover versions of Mick and Keith songs including 'Sleepy City'.

A year or so after John Peel passed away a box containing 143 singles was discovered among his belongings. This was a small private collection that was set aside from his main archive of 100,000 vinyl records and CDs. Apparently this set of 45s represented some of his very favourite songs. Within this box was a copy of The Mighty Avengers 'So Much in Love'.


The Mighty Avengers came from Rugby and with Rolling Stones manager Andrew Loog Oldham, who got the band signed to England's Decca Records in 1964, he produced and recorded Jagger/Richard songs. They released four singles in two years and made a specialty of covering songs by Mick Jagger and Keith Richards,"So Much In Love" was a minor hit. Tony Campbell, the one in specs was later the one in specs in Jigsaw, along with Kevin.

Dean Nelson says "One is intrigued by the B-side of their final single, "Sir Edward and Lady Jane," which manages to squeeze references to the founder and head of Decca and a notable Jagger/Richards song into its name.

The Mighty Avengers - By Pete Chambers

Formed in 1962, The Mighty Avengers had four claims to fame. Claim to fame number one, saw them link up with loose Cannon manager Andrew Loog Oldham (after their initial release Hide Your Pride failed to do the business) - who just so happened to be managing the Rolling Stones at the time. So the Mighty Avengers got to use the songs that the Glimmer Twins (Mick n Keef) deemed less that worthy for Rolling Stone use.

Claim to fame number Two, one of those songs So Much In Love, was a record that became a record (if you see what I mean). Although only charting at a humble 46, it never the less made history by being the first ‘local’ band to dent the UK singles chart. (Frank Ifield had already clocked up 13 hits in the hit parade by this time, but he was of course classed as a solo artist as apposed to a group).

The Mighty Avengers went on to release the singles Blue Turns To Grey (later a hit for Cliff Richard and written by the Stones) and the sublime tour de force (Walkin’ Thru The) Sleepy City. Sadly Tony Campbell (lead guitar, vocals) Dave ‘Biffo’ Beech (drums and vocals), Mike Linnell (bass and lead vocal) and Kevin ‘Bep’ Mahon (guitar and harmonica) failed to dent the charts again as The Mighty Avengers, but……

Claim to fame number three, the band would later re-emerge as Jigsaw and take the music world by storm with the ever popular sky High.

Claim to Fame number four, When the late great John Peel died, he left a box of 142 - 7” vinyl singles, believed to be his favourites, among them was the single So Much In love. When you look at the company it was keeping, (I refer to the likes of Elmore James, MC5, the Beatles and of course The Undertones), it’s easy to see what an impressive legacy the band left behind them.

I recently managed to track down the legendary
and very elusive Andrew Loog Oldham, and asked him if he remembered the Mighty Avengers?, he replied, "Of course, often and fondly". I asked him if he felt they could have been bigger than they actually were? He replied in his usual Delphian way, "We had good songs, and as I recall, had a nice time getting them done, and you can still hear it, it doesn't get much better than that".

" The most successful Coventry group on the national scene are, without doubt, The Mighty Avengers. They were a disappointing 6th in our poll. Once again the emergence of a group onto the national scene has meant that many of their less fanatical fans had drifted away. " Via Tim James site From Coventry Express, Friday May 28th 1965 Citybeat by Paul Connew. 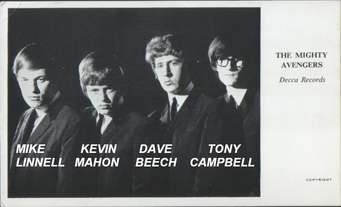 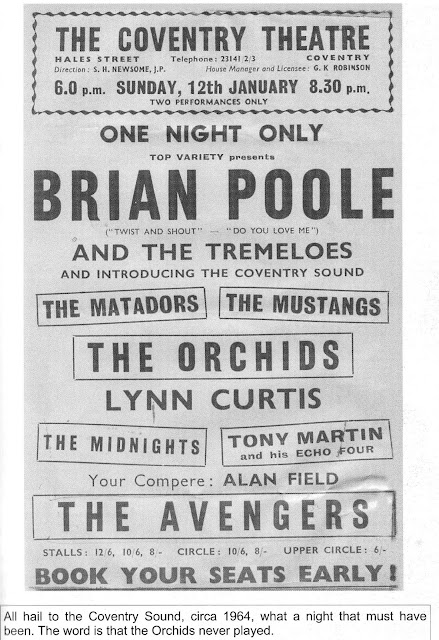 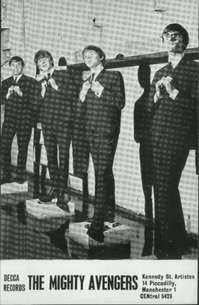 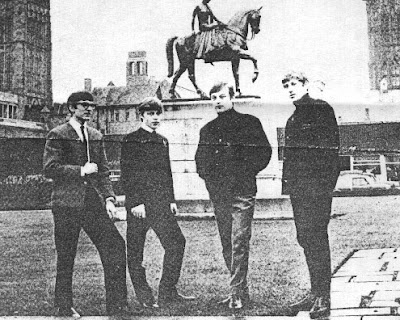 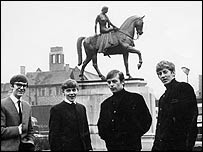 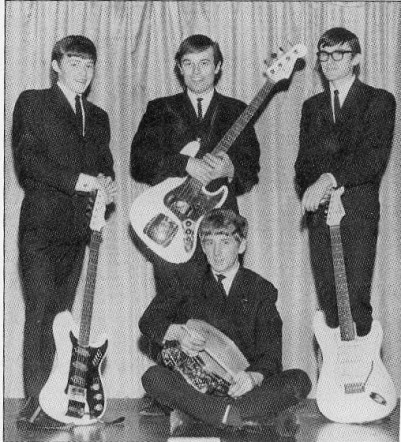 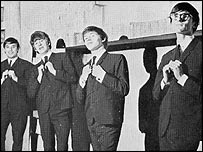 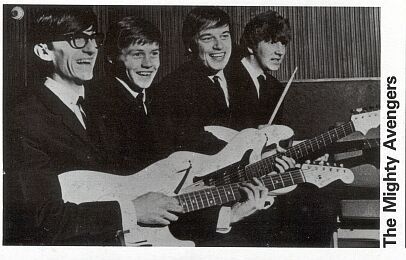 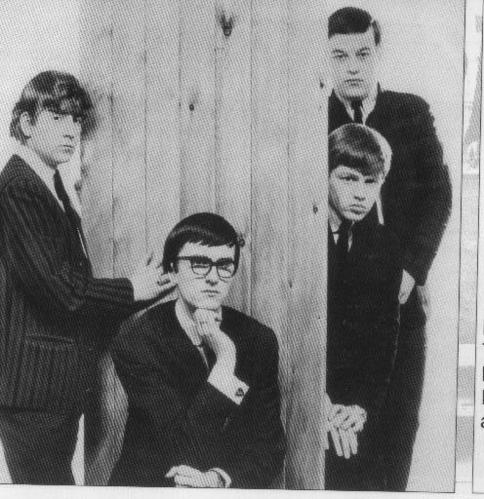 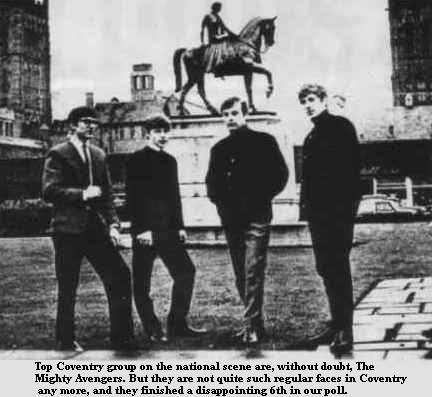 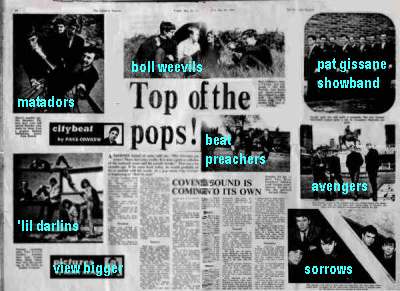 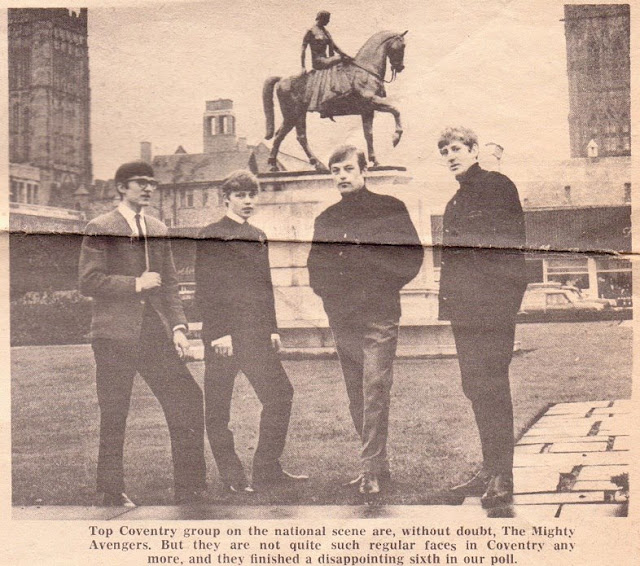