Pete Clemons, with his Rock-Blues pen, hits newsprint again with his latest article for the Coventry Telegraph. This time up he takes us back in time and over to Rugby for the 3 day Rugby Rag Blues Festival featuring Pink Floyd, King Crimson, Free and so many more rock, blues and folk artists. 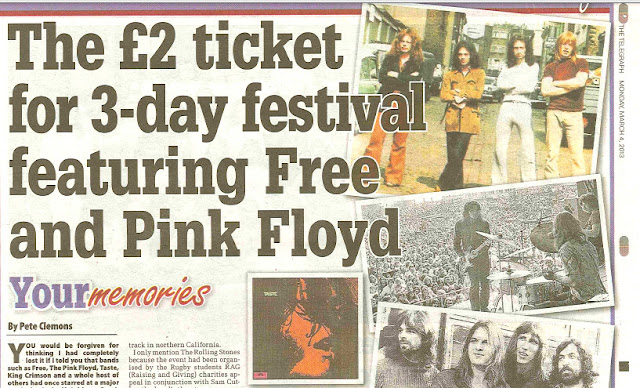 The £2 ticket for 3-day festival featuring Free and Pink Floyd; Your memories By Pete Clemons.


YOU would be forgiven for thinking I had completely lost it if I told you that bands such as Free, The Pink Floyd, Taste, King Crimson and a whole host of others had once starred at a major music festival off Ashlawn Road, Rugby. But it is all true.

On the weekend of Friday 12th through to Sunday 14th September 1969 the Rainsbrook area of Rugby hosted a festival that can only be described, due to the constant rain, as a washout. And over time the event has largely been forgotten about. But in hindsight it had the potential to have been of epic proportions.

The weekend had been slap bang between two infamous events. The Rolling Stones Hyde Park concert held in July of that year and another Stones gig held during December at the Altamont speedway track in northern California.

I only mention The Rolling Stones because the event had been organised by the Rugby students RAG (Raising and Giving) charities appeal in conjunction with Sam Cutler, the band's then tour manager. Sam had also been instrumental with, and had played a major part in, the organisation of both of the above mentioned events. He had also been master of ceremonies at the Hyde Park gig.

The festival itself ran over three days and featured a different form of music on each day, a similar format used on the early National Jazz and Blues festivals. The Friday, headlined by Alexis Korner and also included The Groundhogs, was the blues day. Saturday was progressive rock day and included The Pink Floyd, The Nice, Free, Taste, King Crimson and The Edgar Broughton Band. Sunday saw folk rock bands like The Eclection and The Strawbs and also included Roy Harper and Coventry's own New Modern Idiot Grunt Band.

However, to put the whole thing into a little perspective this was late 1969 and some of these bands were still in their infancy. The Nice were fairly well established having just released their third album during September. The Pink Floyd's then current release was 'Ummagumma' and I am guessing that their set list would have been similar to the live disc from that set. King Crimson had yet to release their eponymous debut album. In fact they had been playing live since April.

Rory Gallagher and his band Taste were certainly in demand. After their Rugby gig they played at Mothers Club in Erdington later that evening. And Free, although on the verge of releasing their second album, were still a year or so from releasing their magnificent 'Fire and Water' album which would get them onto 1970s Isle of Wight festival, perform in front of an estimated 600,000 people, and propel them to worldwide success.

Seemingly it cost the RAG committee £3,000 to stage the event and the target was to make a £4,000 profit for charities. At its height on the Saturday evening there were around 2,000 people in attendance but at its lowest on the Sunday afternoon there were fewer than 200. But in the end, after the sums were calculated the event had broken even.

The revellers were described as parading in frills and furs, buckskins and blankets. Some were even bare-footed. However, regardless of how they looked the weekend was totally trouble free. Even the local police described it all as humorous and good natured.

Coventry Telegraph reporter Alan Poole remembers the weekend well though. At the time he had been working for the Leamington Courier and a friend of his, who was at sister paper The Rugby Advertiser, played quite a big role in organising it.

Alan saw an awful lot of live music back then but, as they do, thoughts have tended to blur over the intervening years. However, his most abiding memory was seeing King Crimson's then bass player, Greg Lake, wearing a very eyecatching white suede coat with a white fur collar. He also recalls the dismal weather and the fact that it rained all weekend and the park being like a quagmire. No doubt because of the weather, the crowd was incredibly small bearing in mind how many great bands were there. But, says Alan, what a bill for two quid, eh? After Rugby's extravaganza, Sam Cutler's career went from strength to strength as he organised some of the largest rock and roll events in history. After the Rolling Stones had left him to sort out the aftermath of Altamont, Sam went on to tour manage The Grateful Dead and organised a number of their huge tours and festivals.

Plans to stage a second weekend event for the beginning of the festival season in May 1970 failed to materialise. 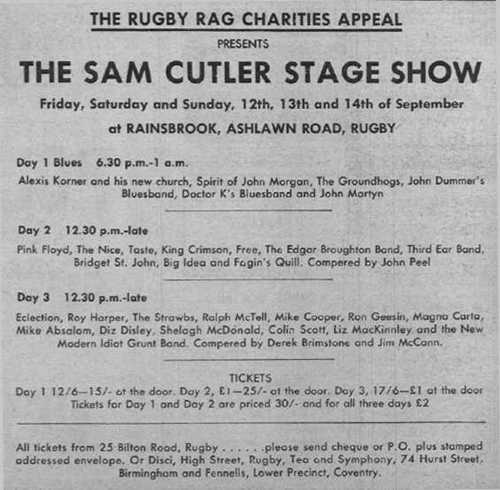 Posted by Coventry Music Scene Archive at 12:04 AM