Asgard were one of the top Coventry progressive rock bands in the early 70's, with their own experimental numbers influenced by bands like the Nice and Pink Floyd and picked up and promoted by John Peel with a view to being recorded for his Dandelion label alongside acts like Medicine Head and Principle Edward's Magic Theatre.

The band practiced at the Coventry Arts Umbrella club and were sometimes joined by Neol Davies (The Selecter) on sitar. Peter Clemons has the full story of this fascinating band in an article from the Coventry Telegraph. Below is further information and photos on the Hobo A to Z of Coventry bands and some youtube of the band, giving an idea of their sound - but first Pete's article - 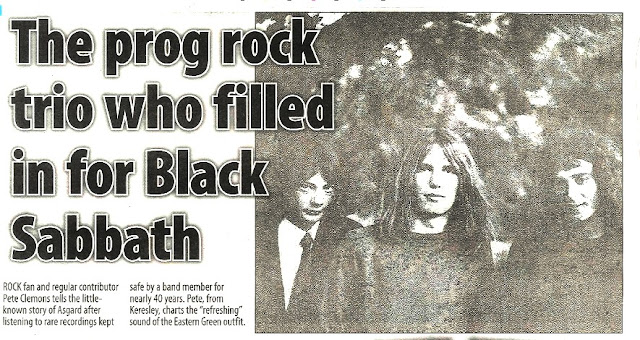 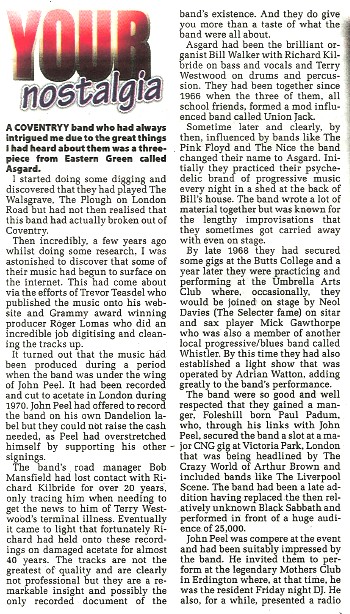 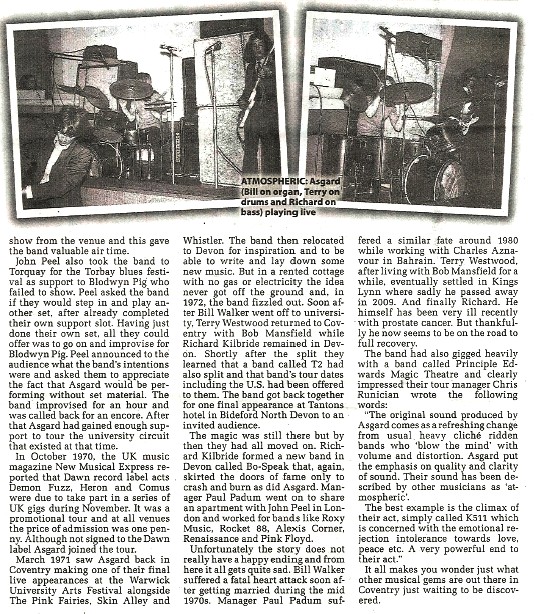 The prog rock trio who filled in for Black Sabbath; ROCK fan and regular contributor Pete Clemons tells the little known story of Asgard after listening to rare recordings kept safe by a band member for nearly 40 years. Pete, from Keresley, charts the "refreshing" sound of the Eastern Green outfit.

A COVENTRY band who had always intrigued me due to the great things I had heard about them was a three piece from Eastern Green called Asgard.

I started doing some digging and discovered that they had played The Walsgrave, The Plough on London Road but had not then realised that this band had actually broken out of Coventry.

Then incredibly, a few years ago whilst doing some research, I was astonished to discover that some of their music had begun to surface on the internet. This had come about via the efforts of Trevor Teasdel who published the music onto his website and Grammy award winning producer Roger Lomas who did an incredible job digitising and cleaning the tracks up.

It turned out that the music had been produced during a period when the band was under the wing of John Peel. It had been recorded and cut to acetate in London during 1970. John Peel had offered to record the band on his own Dandelion label but they could not raise the cash needed, as Peel had overstretched himself by supporting his other signings.

The band's road manager Bob Mansfield had lost contact with Richard Kilbride for over 20 years, only tracing him when needing to get the news to him of Terry Westwood's terminal illness. Eventually it came to light that fortunately Richard had held onto these recordings on damaged acetate for almost 40 years. The tracks are not the greatest of quality and are clearly not professional but they are a remarkable insight and possibly the only recorded document of the band's existence. And they do give you more than a taste of what the band were all about.

Asgard had been the brilliant organist Bill Walker with Richard Kilbride on bass and vocals and Terry Westwood on drums and percussion.

They had been together since 1966 when the three of them, all school friends, formed a mod influenced band called Union Jack.

Sometime later and clearly, by then, influenced by bands like The Pink Floyd and The Nice the band changed their name to Asgard. Initially they practiced their psychedelic brand of progressive music every night in a shed at the back of Bill's house. The band wrote a lot of material together but was known for the lengthy improvisations that they sometimes got carried away with even on stage.

By late 1968 they had secured some gigs at the Butts College and a year later they were practicing and performing at the Umbrella Arts Club where, occasionally, they would be joined on stage by Neol Davies (The Selecter fame) on sitar and sax player Mick Gawthorpe who was also a member of another local progressive/blues band called Whistler. By this time they had also established a light show that was operated by Adrian Watton, adding greatly to the band's performance.

The band were so good and well respected that they gained a manger, Foleshill born Paul Padum, who, through his links with John Peel, secured the band a slot at a major CNG gig at Victoria Park, London that was being headlined by The Crazy World of Arthur Brown and included bands like The Liverpool Scene. The band had been a late addition having replaced the then relatively unknown Black Sabbath and performed in front of a huge audience of 25,000.

John Peel was compere at the event and had been suitably impressed by the band. He invited them to perform at the legendary Mothers Club in Erdington where, at that time, he was the resident Friday night DJ. He also, for a while, presented a radio show from the venue and this gave the band valuable air time.

John Peel also took the band to Torquay for the Torbay blues festival as support to Blodwyn Pig who failed to show. Peel asked the band if they would step in and play another set, after already completed their own support slot. Having just done their own set, all they could offer was to go on and improvise for Blodwyn Pig. Peel announced to the audience what the band's intentions were and asked them to appreciate the fact that Asgard would be performing without set material. The band improvised for an hour and was called back for an encore. After that Asgard had gained enough support to tour the university circuit that existed at that time.

In October 1970, the UK music magazine New Musical Express reported that Dawn record label acts Demon Fuzz, Heron and Comus were due to take part in a series of UK gigs during November. It was a promotional tour and at all venues the price of admission was one penny.

Although not signed to the Dawn label Asgard joined the tour.

March 1971 saw Asgard back in Coventry making one of their final live appearances at the Warwick University Arts Festival alongside The Pink Fairies, Skin Alley and Whistler. The band then relocated to Devon for inspiration and to be able to write and lay down some new music. But in a rented cottage with no gas or electricity the idea never got off the ground and, in 1972, the band fizzled out. Soon after Bill Walker went off to university, Terry Westwood returned to Coventry with Bob Mansfield while Richard Kilbride remained in Devon.

Shortly after the split they learned that a band called T2 had also split and that band's tour dates including the U.S. had been offered to them. The band got back together for one final appearance at Tantons hotel in Bideford North Devon to an invited audience.

The magic was still there but by then they had all moved on. Richard Kilbride formed a new band in Devon called Bo-Speak that, again, skirted the doors of fame only to crash and burn as did Asgard. Manager Paul Padum went on to share an apartment with John Peel in London and worked for bands like Roxy Music, Rocket 88, Alexis Corner, Renaissance and Pink Floyd.

Unfortunately the story does not really have a happy ending and from here it all gets quite sad. Bill Walker suffered a fatal heart attack soon after getting married during the mid 1970s. Manager Paul Padum suffered a similar fate around 1980 while working with Charles Aznavour in Bahrain. Terry Westwood, after living with Bob Mansfield for a while, eventually settled in Kings Lynn where sadly he passed away in 2009. And finally Richard. He himself has been very ill recently with prostate cancer. But thankfully he now seems to be on the road to full recovery.

The band had also gigged heavily with a band called Principle Edwards Magic Theatre and clearly impressed their tour manager Chris Runician wrote the following words: "The original sound produced by Asgard comes as a refreshing change from usual heavy clich ridden bands who 'blow the mind' with volume and distortion. Asgard put the emphasis on quality and clarity of sound. Their sound has been described by other musicians as 'atmospheric'.

The best example is the climax of their act, simply called K511 which is concerned with the emotional rejection intolerance towards love, peace etc. A very powerful end to their act."

It all makes you wonder just what other musical gems are out there in Coventry just waiting to be discovered.

YOU TUBE
The following tracks by Asgard were digitised and cleaned up by producer Roger Lomas from a rare live acetate of the band which unfortunately was partially damaged with solder splashes along with the customary vinyl clicks and noises. Although Asgard were lined up to do some professional recording for John Peel's label at one stage, it never happened and these demo tracks are all that we have. However, they give a good idea of the band's sound and material at the time they were recorded.
Asgard - Sunrise 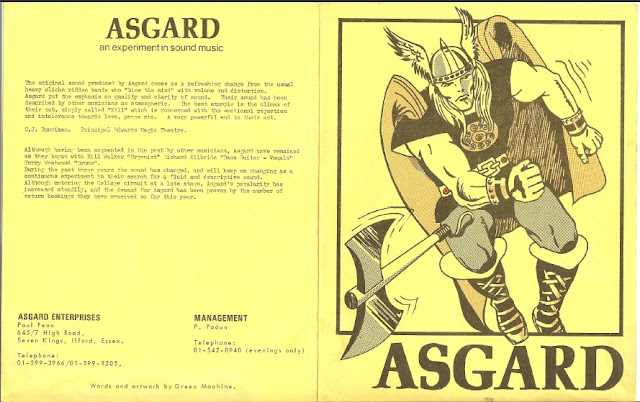 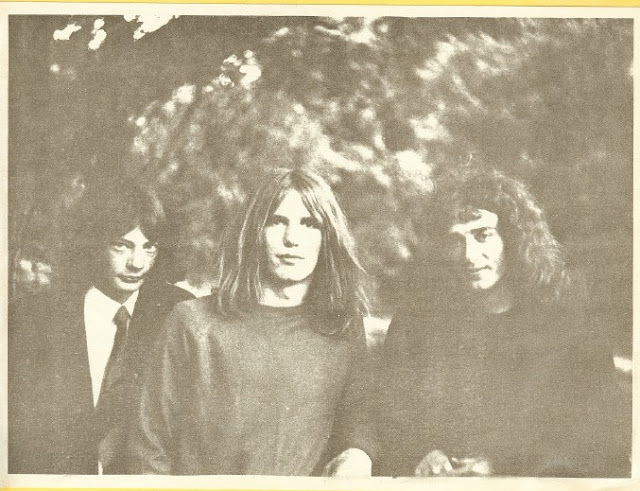 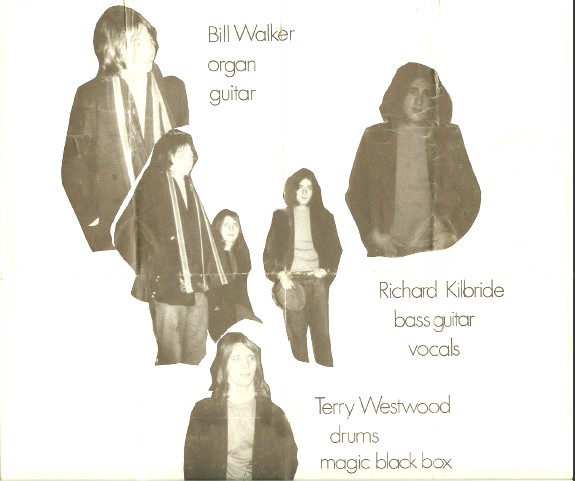 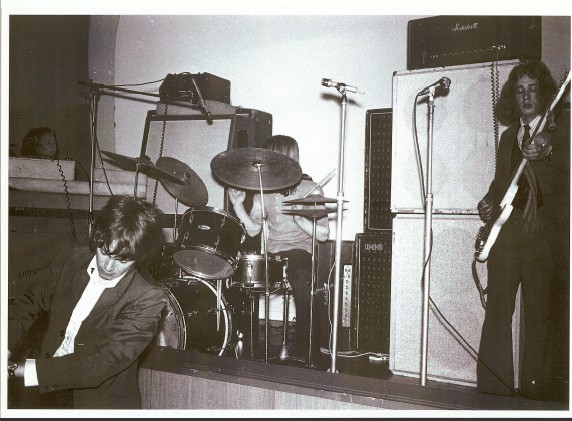 Follow the link to A to Z of Coventry bands for more photos and material. 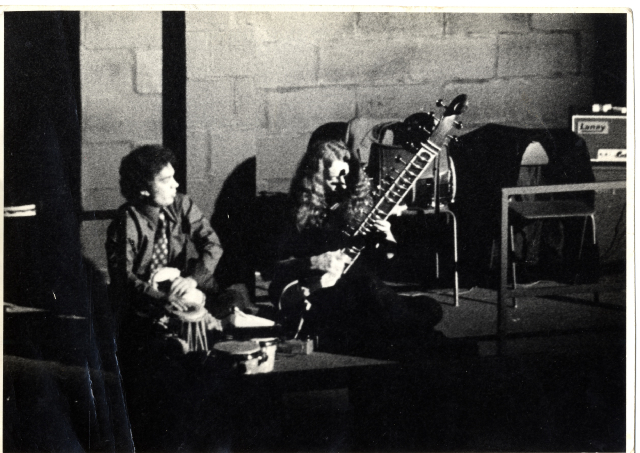 Asgard were under the wing of  John Peel for a while and they were mentioned in his column in Disc and Music Echo early 1970
In the article John Peel writes "Paul Padum and elements of Asgard stayed at Peel Acres. Tonight we were supposed to drive to Coventry to see Asgard play but there was talk of fog on the M1" 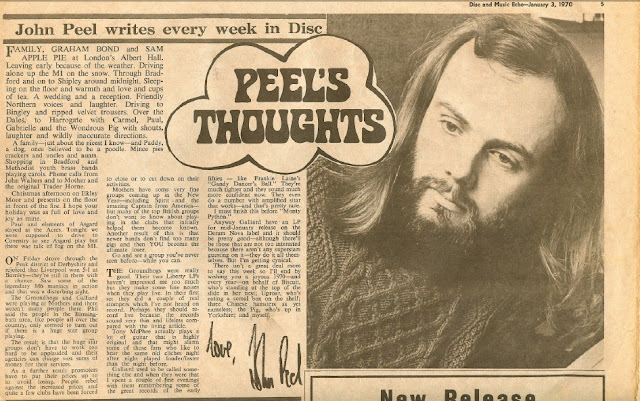 John Peel
"We were taken under the wing of John Peel for some time, through the efforts of Paul Padun our manager,We played with John Peel on his new band spot at 'Mothers' - Erdington in Birmingham / Asgard made its debut at the Torbay Blues Festival and also appeared at Torquay Town hall with John Peel at a Blues festival as support to Blodwyn Pig who failed to turn up! So we improvised a set to fill their spot. He also put us on a C.N.D festival in Victoria park (with a huge audience), headlined by The Crazy world of Arthur Brown and The Liverpool Scene. We also did many Gigs with Principal Edwards Magic Theatre in St. Ives, who were also his protogies. The Roundhouse in London"