The Sorrows Reform - Another recent article by Pete Clemons

New from Pete Clemons - a recent article on The Sorrows - the seminal Coventry 60's 'R&B / freakbeat' band who have recently reformed. The original group was operative between 1963 - 1969.
(Read text of the article below.) 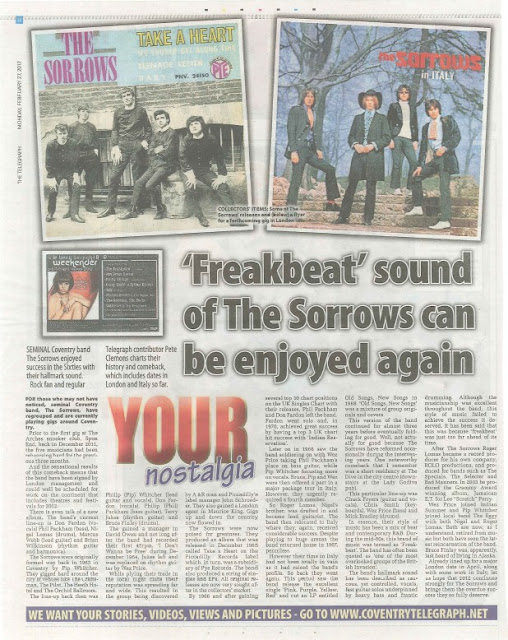 'Freakbeat' sound of The Sorrows can be enjoyed again; YOUR nostalgia Telegraph contributor Pete Clemons charts their history and comeback, which includes dates in London and Italy so far. SEMINAL Coventry band The Sorrows enjoyed success in the Sixties with their hallmark sound. Rock fan and regular.

FOR those who may not have noticed, seminal Coventry band, The Sorrows, have regrouped and are currently playing gigs around Coventry.

Prior to the first gig at The Arches snooker club, Spon End, back in December 2011, the five musicians had been rehearsing hard for the previous three months.

And the sensational results of this comeback means that the band have been signed by London management and could well be scheduled for work on the continent that includes theatres and festivals for 2012.

The Sorrows were originally formed way back in 1963 in Coventry by Pip Whitcher. They gigged hard around the city at venues like The Craftsman, The Pilot, The Heath Hotel and The Orchid Ballroom. The line-up back then was Philip (Pip) Whitcher (lead guitar and vocals), Don Fardon (vocals), Philip (Phil) Packham (bass guitar), Terry Jukes (rhythm guitar) and Bruce Finley (drums).

The gained a manager in David Owen and not long after the band had recorded their first 45rpm, 'I Don't Wanna be Free' during December 1964, Jukes left and was replaced on rhythm guitar by Wez Price.

While plying their trade in the local night clubs their reputation was spreading far and wide. This resulted in the group being discovered by A & R man and Piccadilly's label manager John Schroeder.

They also gained a London agent in Maurice King. Gigs up and down the country now flowed in.

The Sorrows were now poised for greatness. They produced an album that was released in December 1965 called Take a Heart on the Piccadilly Records label which, in turn, was a subsidiary of Pye Records. The band also produced a string of singles and EPs. All original releases are now very sought after in the collectors' market. By 1966 and after gaining several top 10 chart positions on the UK Singles Chart with their releases, Phil Packham and Don Fardon left the band. Fardon went solo and, in 1970, achieved great success by having a top 3 UK chart hit success with 'Indian Reservation'.

Later on in 1966 saw the band soldiering on with Wez Price taking Phil Packham's place on bass guitar, while Pip Whitcher focusing more on vocals. Bruce, Pip and Wez were then offered a part in a major package tour in Italy. However, they urgently required a fourth member. So Roger Lomas, Nigel's brother, was drafted in and became lead guitarist. The band then relocated to Italy where they, again, received considerable success. Despite playing to huge arenas the band returned home in 1967, penniless.

However their time in Italy had not been totally in vain as it had raised the band's profile. So back they went again. This period saw the band release the excellent single 'Pink, Purple, Yellow, Red' and cut an LP entitled Old Songs, New Songs in 1968. 'Old Songs, New Songs' was a mixture of group originals and covers This version of the band continued for almost three years before eventually folding for good. Well, not actually for good because The Sorrows have reformed occasionally during the intervening years. One noteworthy comeback that I remember was a short residency at The Dive in the city centre (downstairs at the Lady Godiva pub).
This particular line-up was Chuck Fryers (guitar and vocals), Chris Smith (keyboards), Wez Price (bass) and Mick Bradley (drums).

In essence, their style of music has been a mix of beat and contemporary R&B. During the mid-60s, this brand of music was termed as 'Freakbeat'.

The band has often been quoted as 'one of the most overlooked groups of the British Invasion'. The band's hallmark sound has been described as raucous, yet controlled, vocals, fast guitar solos underpinned by heavy bass and frantic drumming. Although the musicianship was excellent throughout the band, this style of music failed to achieve the success it deserved.

It has been said that this was because 'freakbeat' was just too far ahead of its time.

After The Sorrows Roger Lomas became a record producer for his own company, ROLO productions, and produced for bands such as The Specials, The Selecter and Bad Manners. In 2003 he produced the Grammy Award winning album, Jamaican E.T. for Lee "Scratch" Perry.

Wez Price joined Indian Summer and Pip Whitcher joined local band The Eggy with both Nigel and Roger Lomas. Both are now, as I understand, retired from music but both have seen the latest reincarnation of the band. Bruce Finlay was, apparently, last heard of living in Alaska.

Already lined up for a major London date in April, along with some work in Italy, let us hope that 2012 continues strongly for The Sorrows and brings them the overdue success they so fully deserve.


The Sorrows in Europe October 2016
Another article by Pete Clemons.

Singles by the Sorrows
Find the tracks on youtube

Take A Heart / We Should Get Along Fine Aug '65

Per una donna no! 1967 Italian single (Credited to Chris and the Sorrows)

Coventry's biggest group of the '60's actually only had one major hit, but released a number 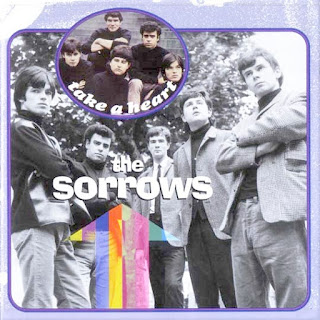 of superb, tough R&B singles and a very rare album.

Above is the original line up. Maughan had previously been in The Hawks. A hard gigging band, they played blues and beat and secured a twice a week residency at the Pilot in Radford, building up a faithful large following.They also played at Coventry City's Highfield Road ground during half time.

They were signed to Pye's Piccadilly label by producer John Schroeder and released a tough, self-penned a-side for their first single.

Jukes left soon after and was replaced by ex-Unknowns guitarist Wes Price. This line-up recorded the Shuman / Westlake composed second single. Although another good performance, the single failed to sell in the quantities needed to chart and the band were demoralised enough to consider splitting. However they heard a song which was to be their first (and only UK) hit. It was the Boys Blue's version of 'Take A Heart' , written by Miki Dallon (aka Mickey Tinsley).

Tony Fennell tells us, "I recorded “Take a Heart” with the Sorrows as a session drummer and worked with Johnny Goodison’s Showband.

Bruce Finlay left the Sorrows and I recorded Take a Heart and No No No + 1 other track which escapes my memory. This was at Piccadilly Studio with John Schroeder (Cast your fate to the wind fame). Between release of the single I left Coventry to move to Bristol.

September 1965, it also became a huge hit in Europe and eventually the U.S. For the following few months it looked as if the band were on the brink of major success, but the important follow up single failed to perform in the charts (reaching number 47 in the N.M.E.) .
The Sorrows music was raucous upbeat frenzied hard aggressive rock with great musicianship and an incredible drum beat.

Pye had already scheduled an album release, and this duly came out at the end of 1965. 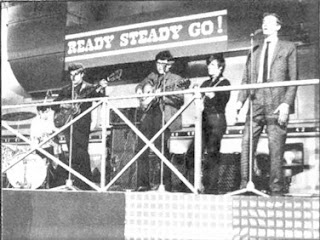 Although containing a few previously released tracks, it was a great demonstration of their talents and styles mixing R&B, Beat, Folk Rock and raw punk attitude, it nevertheless failed to sell in enough quantities to stop it becoming quickly deleted, and is now one of the more sought after artifacts of the beat era.

Again despondency set in as further U.K. singles failed to sell and Maughan and Packham left. However the remaining 3 members were offered a major tour of Italy (where 'Take A Heart' had been a big hit) playing in huge, 30,000 to 40,000 seater Football stadiums providing they did it as a 4 -piece. They recruited Roger Lomas from The Clouds and with Wes Price on bass, set out on the package tour playing alongside the likes of Charles Aznovour!!. The reaction was so great , they decided to settle in Italy during 1966. During that year they were major pop stars there, frequently having their hotels mobbed by enthusiastic fans, who blocked the roads outside, holding up posters of the band !!.

The band spent too long following up their successes and this coupled with management problems saw the band famous, but with no money, they toured, but were practically starving and by early 1967 they were out of favour with the fickle mid-'60's pop audience.

Lomas moved back to Coventry in September 1967, Whitcher followed soon after.


And from Rex Brough

Coventry's greatest 60's band. Their sound was similar to the R 'n B bands like the Kinks 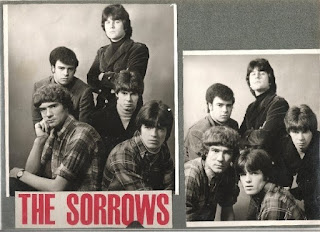 and the Pretty things - raw energy. Their only hit, "Take a Heart," reached number 25. They were featured on Ready Steady Go, demonstrating to Cathy McGowan how they got their unique drum sound (towels over the toms). They issued one LP in this form. Don Maughn and Philip Packham left, Philip Whitcher, taking over lead vocals. At this point Take a heart, hit in Italy, so Roger Lomas was recruited. The group moved to Italy, where they had some success. Their last single "Pink, Purple, Yellow and Red" is a freakbeat classic. The third lineup recorded an album, mainly of covers, "Old songs, New songs"

Wes Price did one tour and a single with Indian Summer. Phil Whitcher after being in theEggy, was in a short-lived studio group with Roger Lomas and Paul Hooper called the Zips. He later joined joined Torquays "Brummies in Exile" in the 90's. Don Maughn changed his name to Don Fardon. In the early 80's the band reformed without Don Fardon. Tim Jamesplayed in this line-up. Fardon, however did take part in another brief reunion in the early 90's. Don Fardon had some solo hits including his biggest “Indian Reservation” which Paul Revere and the Raiders covered.

Bruce Finlay is now in a band in Alaska called ANWR. It is named after the Arctic National 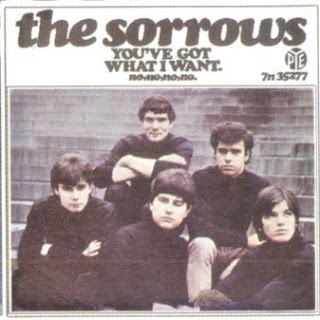 Wildlife Refuge (ANWR). He is also the producer of BLACK & TAN RECORDS, ANWR's label. He has toured in other bands in Canada and the United States. I have pasted a web link of your page onto our website. ANWR currently has a single to be released December 2002.

Freakbeat - From Wikipedia - To quote Wikipedia, “Freakbeat is a primarily European rock music genre that peaked between 1966 and 1967. Elements of the freakbeat sound include strong direct drum beats, loud and frenzied guitar riffs, and extreme effects such as: fuzztone, flanging, distortion and compression or phasing on the vocal or drum tracks. Often used to describe the European counterpart to the psychedelic garage rock of American groups like The Seeds, The Thirteenth Floor Elevators, and The Standells, freakbeat is most often applied to music originating in the UK, although many artists on the European continent also contributed to the freakbeat style. Some of the best-known examples of the freakbeat genre include the British hits “Take a Heart” by The Sorrows, “Making Time” by The Creation, and “I Can Hear the Grass Grow” by The Move.” 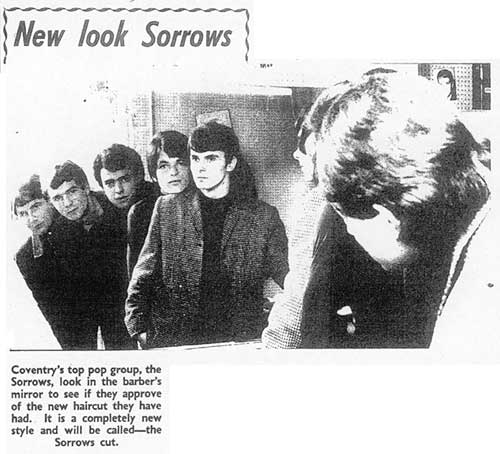 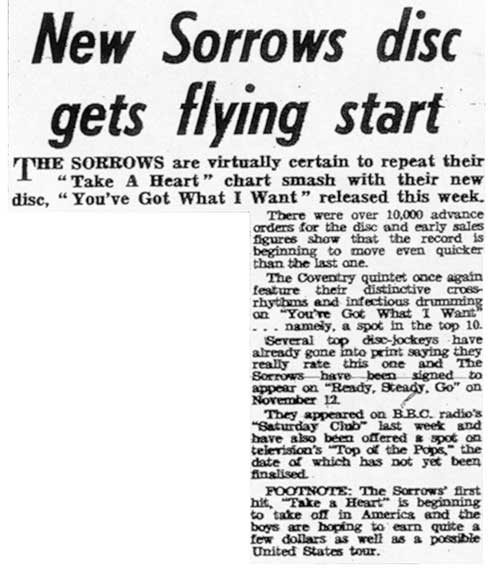 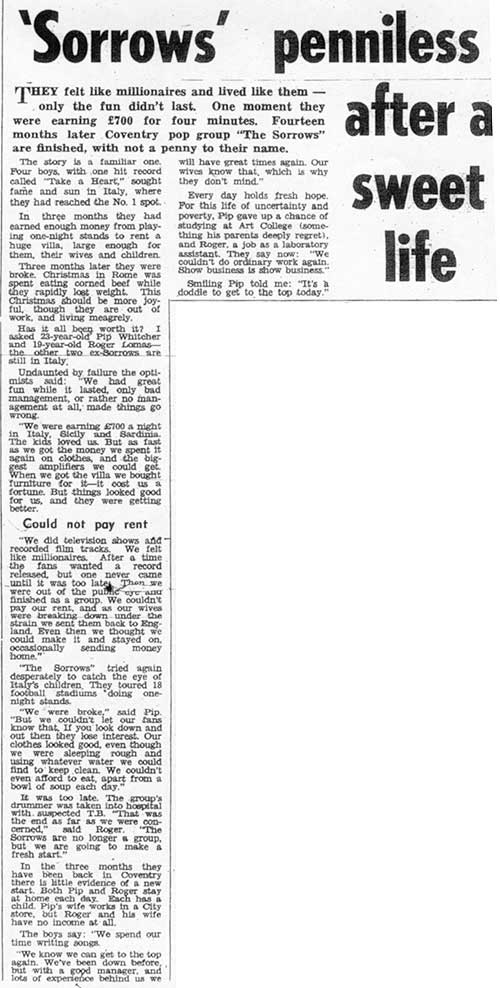 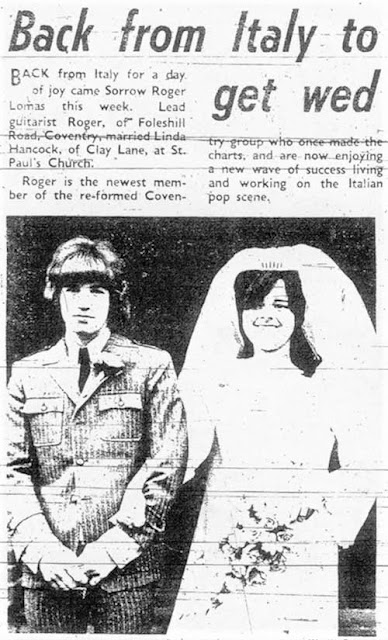 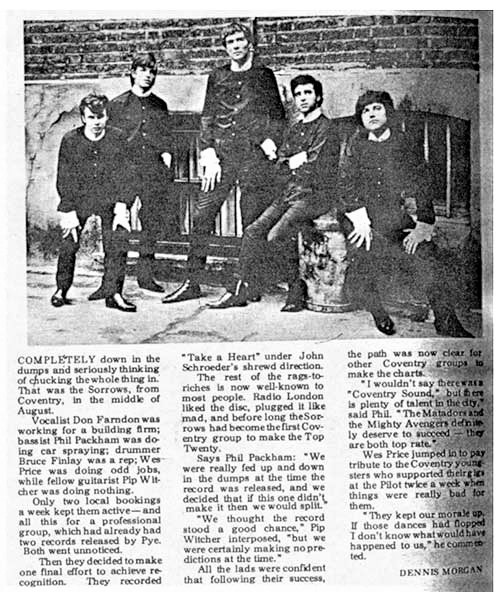 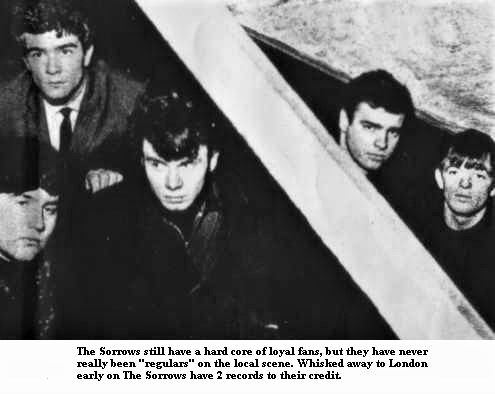 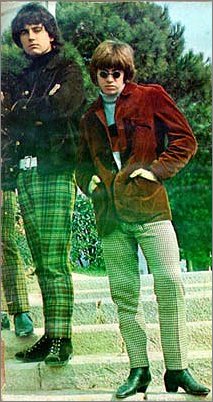